Home NEWS Baby River would have been 1yo on July 1, Nasino still in... 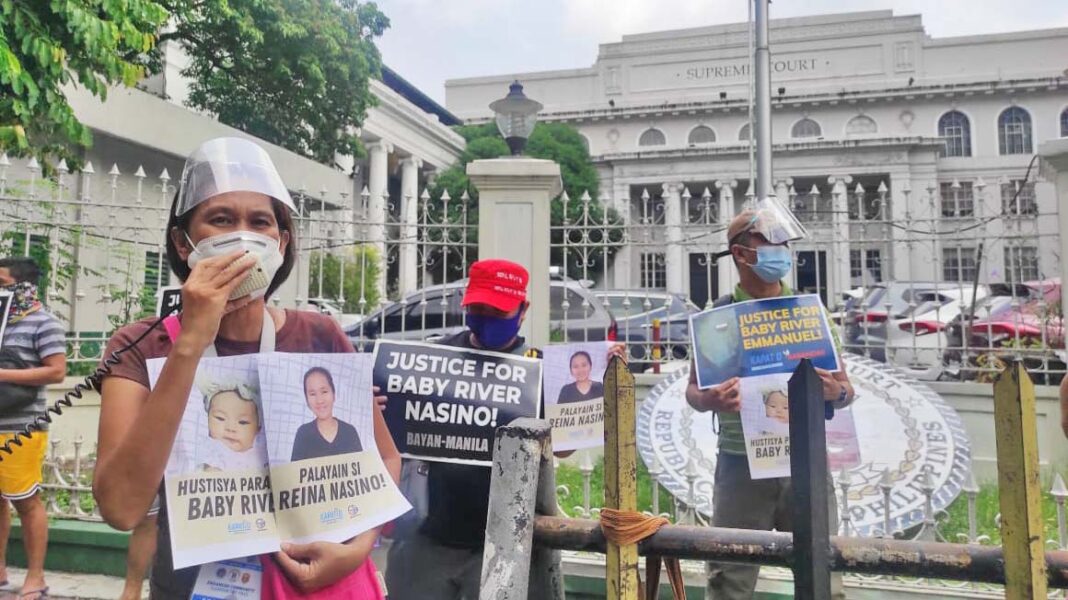 Apart from Christmas and New Year, birthdays are among the most-loved occasions of Filipinos. Celebrations of birthdays are for thanksgiving and well-wishing and for sending out praise and thanks for another year in life. Parents and families in the Philippines give particular importance to the celebration of the first, seventh and debut (18th for the girl or 21st for the boy) birthday of their offspring.

The first birthday is a milestone like no other—with both child and mother passing a threshold in the baby’s development and the mother in her recovery from giving birth.

Baby River Emmanuelle, the firstborn daughter of political prisoner Reina Nasino, would have been 1-year old on July 1, 2021. But she passed on October 9 last year, only three months and eight days old. Her lungs succumbed to bacterial infection, after weeks of confinement at the Philippine General Hospital.

There could have been incredible stories to tell Baby River—how she grew in her mother’s belly while her mother is in prison. How her mother was rushed to the hospital in time for her birth and was returned to jail the following day. How she lived inside the Manila City Jail Female Dormitory (MCJ FD) for more than a month with her mother, much like the children of political prisoners during martial law. How her mother cried and missed her when they were separated on August 13, when River was barely six weeks old after courts denied their plea to be together.

They could have been stories of resilience. But they could now be stories of attaining justice.

[I am sad but I pray that Baby River will be the way for her to help her mother achieve justice.]

Nasino, meanwhile, is still in prison since her November 5, 2019 arrest.

She was arrested with Ram Carlo Bautista and Alma Moran at the BAYAN Manila office in Tondo. The police alleged finding guns and explosives in a midnight raid on the strength of a search warrant from Quezon City Executive Judge Cecilyn Burgos-Villavert. Nasino and various groups said the evidence was planted, similar to many cases of political persecution in the country.

“A year after, accountability and justice remain elusive. But we will continue to press their cases which are hollow, fake because the guns and grenades were planted just like in other cases of political prisoners,” said Kapatid spokesperson Fides Lim.

Asis, with Kapatid Metro Manila, went to the Supreme Court and lit candles for Baby River and continued to press for Nasino’s release.

“Today, baby River would have been blowing her first candle on top of her birthday cake. But instead, we light a candle to remember her,” said Kathy Panguban, one of Nasino’s counsels from the National Union of People’s Lawyers.

Panguban called Nasino through the Manila City Jail Female Dormitory’s landline. The lawyer said Nasino only cried but said she will write a letter to remember River’s first birthday.

Nasino spent almost her entire pregnancy in jail, getting only one check-up and little to no prenatal care.

She is one of 713 political prisoners grappling with the threats of COVID-19 in packed jails, five of whom have already succumbed to the deadly coronavirus.

Baby River was born underweight and slight yellow skin discoloration that lawyers for Nasino said indicated difficulties in her pregnancy.

Asis joined other members of Kapatid, the support group of families and friends of political prisoners, in filing an “urgent petition” before the Supreme Court in April 2020 for the “humanitarian release” of old and sick prisoners, including then six-month pregnant Nasino, who were critically at risk from the COVID-19.

“But the Supreme Court (SC) sat on the petition, allowing jail authorities to take Nasino’s child away from her while being breastfed,” said Kapatid in a statement.

Asis also wrote to then Chief Justice Diosdado Peralta to plead for Nasino’s release. She said she will continue to fight for her daughter’s release and for justice for Baby River.

Panguban noted that the petitions of Nasino and the two activists arrested with her are not yet resolved two years after their arrest in November 2019.

These include a petition filed before the Court of Appeals to ask for the dismissal of the fabricated charges of illegal possession of firearms and explosives.

Cases were also filed to hold to account those responsible for removing Baby River from her mother despite breastfeeding and the hijacking of her casket on the day of her burial.