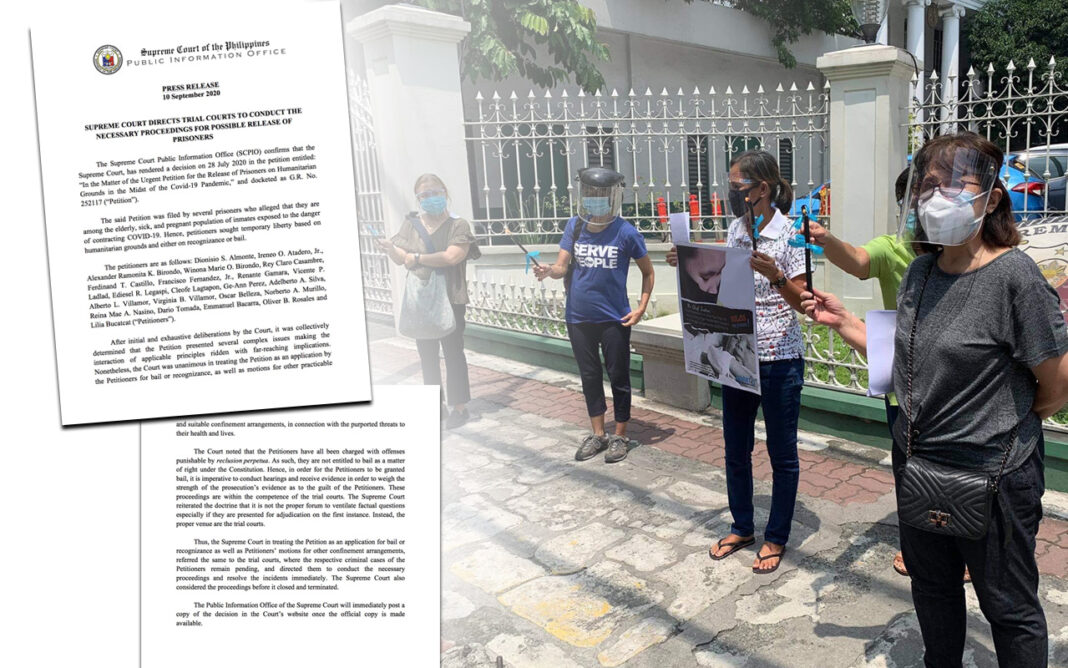 “Handwashing works for COVID-19 but not for the SC for this petition,” KAPATID spokesperson Fides Lim said in reference to the Supreme Court (SC) decision to refer the petition for humanitarian release of 22 political prisoners to the lower courts for decision.

Remanding the petition to the trial courts meant to them another long wait as the lower courts would need to hear out the new motion.

Lim said that when the 22 petitioners and their relatives filed the petition five months ago, there were only about 434 COVID-19 cases in the Philippines confirmed by the Department of Health. Today, the confirmed cases have swollen to 248,947 or 573 times bigger and a total of 294,194 individuals have tested positive, although the government has yet to conduct mass testing.

“Bakit ngayon lang? (Why only now?) KAPATID regrets that the Supreme Court took five months to release its decision only to remand this to the lower courts,” added Lim.

The SC press release on September 10 announcing the decision said the decision was rendered on July 28, but the information was announced only today, over a month and a half later.

The political prisoners filed the petition on April 8. Chief Justice Diosdado Peralta gave word that it would be decided on June 16. Also in June, Peralta explained that the delay in resolving the petition was due the situation of a justice in charge of the case stuck in Visayas due to the lockdown.

“Another political prisoner, Rodrigo Lazar, died from illness just last September 9 during this COVID-19 pandemic. Even now, we cannot quantify the preventable deaths or the painful separation of a mother and child had the SC acted more swiftly,” Lim said.

She explained Lazar died from complications from hypertension and diabetes in the Sorsogon provincial hospital, and also referred to the case of political prisoner Reina Mae Nasino who spent her pregnancy in jail, gave birth on July 1 and was separated from her newborn daughter on August 13. Lim lamented the unreported rising death toll in congested prison facilities amid the pandemic.

“It has been a long and difficult wait, and hurtful because while we expected swift and positive action, the Supreme Court, despite the prisoners’ life and death situation in overcrowded, disease-ridden jails, let go of five months and neglected the call of prisoners who hoped for at least a chance to survive,” said Lim.

The SC treated the political prisoners’ petition as an application for bail or recognizance “as well as petitioners’ motions for other confinement arrangements.”

The High Court said that the offenses charged against the petitioners are punishable by reclusion perpetua, hence, bail cannot be availed of as a matter of right. Trial courts would have to determine that evidence is not strong to allow their release.

The Bureau of Jail Management and Penology (BJMP) reported on September 10 that there are 1,501 Persons Deprived of Liberty or PDLs released from the facilities during the pandemic. In the budget hearing of the House Committee on Appropriations, Jail Director Allan Iral said those released included 560 are elderly, 909 are sick, and 32 are pregnant.

Whether 1,501 or 3,300, not one of the 22 political prisoners who filed their petition at the SC were released six months after local COVID-19 transmission was confirmed in the country.

Iral revealed upon Gaite’s inquiry that 1,151 PDLs have caught the disease, among them 918 recovered and 15 died. He said that only 175 remain to be active cases, with the recovery rate at almost 80%.