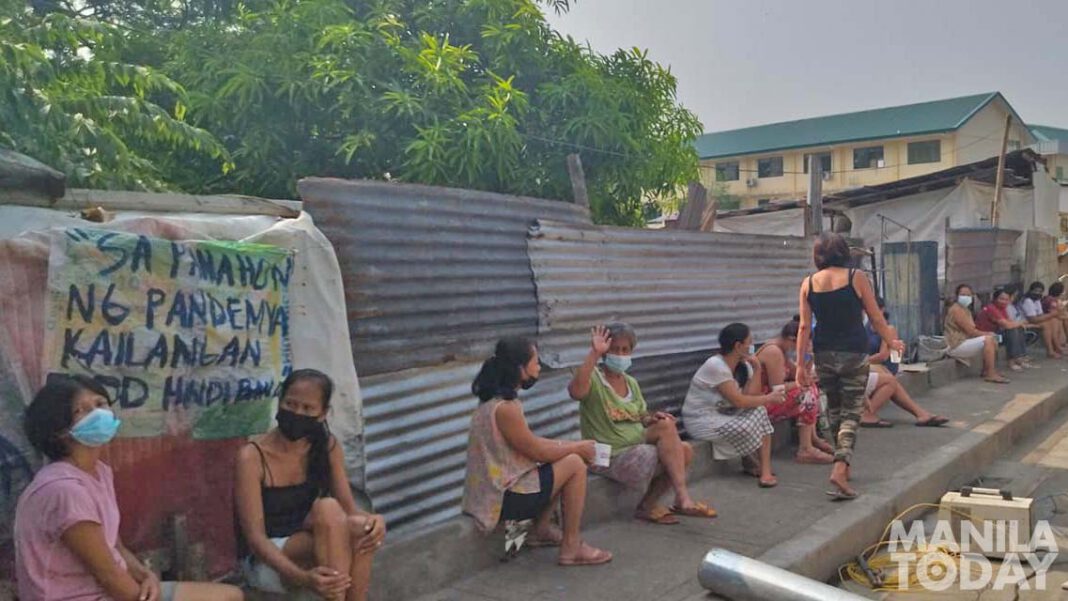 Tension satiated the air once more in Pook Manatili.

This morning, village captain Willie Real arrived with police to continue the construction of the fence in the community. Real threatened to disperse the women who lined along the planned fence site to stop any attempts to build it.

But should barangay officials and police push for the installation of the fence project in Pook Manatili, Barangay San Vicente in Quezon City, residents vowed to form a human barricade to stop the project.

QC Urban Poor Coordinating Council (QC UPCC) spokesperson Carmelita ‘Ka Mameng’ Collado stressed that the project has been halted, and this being the ‘status quo’, pending an official resolution or agreement from the inter-agency meetings with the Quezon City local government, PCUP, and the residents.

Residents said that 300 residents and several homes would be affected by the government-funded project. The current and varying lockdown or quarantine protocols are not a good time to lose their homes, residents lamented.

But Real has said repeatedly that the Department of Public Works and Highways (DPWH) project will push through. Residents were also told that the fence was for a ‘beautification project’ in Pook Manatili.

“At the height of a pandemic, what we need is food not a fence,” said one of the signs that residents hung on the galvanized iron sheets meant to serve as the temporary fence.

The residents also complained that the said barricade would block their access to the main road. This shall impede their mobility especially in cases of emergency.

According to Collado, the installation of the fence is an outright attack on the economic rights of the residents who have their small business enterprises like sari-sari stores. She added that the right to livelihood should never be trampled for a so-called “road beautification project.”

“Instead of livelihood and economic support, direct intimidation and harassment are the response of Brgy. Captain Real along with state forces to the residents of this urban poor community. It is only right for the residents of Pook Manatili and the rest of the affected sectors to struggle for their basic rights in this time of global pandemic,” said Collado.

Collado was arrested on May 6 in Pook Manatili when people barricaded against the fence construction and protesting residents were dispersed by police.

The Presidential Commission for the Urban Poor (PCUP) tried to mediate the confrontation and advised that the construction of the Fence should undergo legal and due process such as the ‘pre-demolition conference’ and ‘adequate consultation.’ The PCUP ultimately recommended during this time to stop the project and launch inter-agency consultations, considering the country is in the middle of the pandemic.

The Office of the City Attorney of the local government visited Collado in Anonas police station to offer legal advice and ensure her rights were not being violated. She was released on the same day.

On May 14, leaders of ng Pook Manatili Association, ALSA Diliman and QC UPCC joined the inter-agency meeting with the Office of the City Attorney of Mayor Joy Belmonte, DPWH, PCUP and Office of Rep. Bong Suntay to talk about the fence project. Residents said they are not against the whole road beautification project and they are only objecting to the fence construction. A resolution that came out of the meeting is to conduct on-site inspection to review the project in consultation with the residents.

The residents also aired their grievances against the village captain for the arrest of Collado and the violent dispersal on May 6.

The inspection was conducted on May 18, but QC UPCC said they were not made to participate in it. Residents said the village captain had also told them that he would withdraw complaints against at least 30 of them if they agree to the fence.

In another meeting on June 16, residents complained that Real continued to threaten and harass residents, telling them to leave despite the “status quo” on the project.