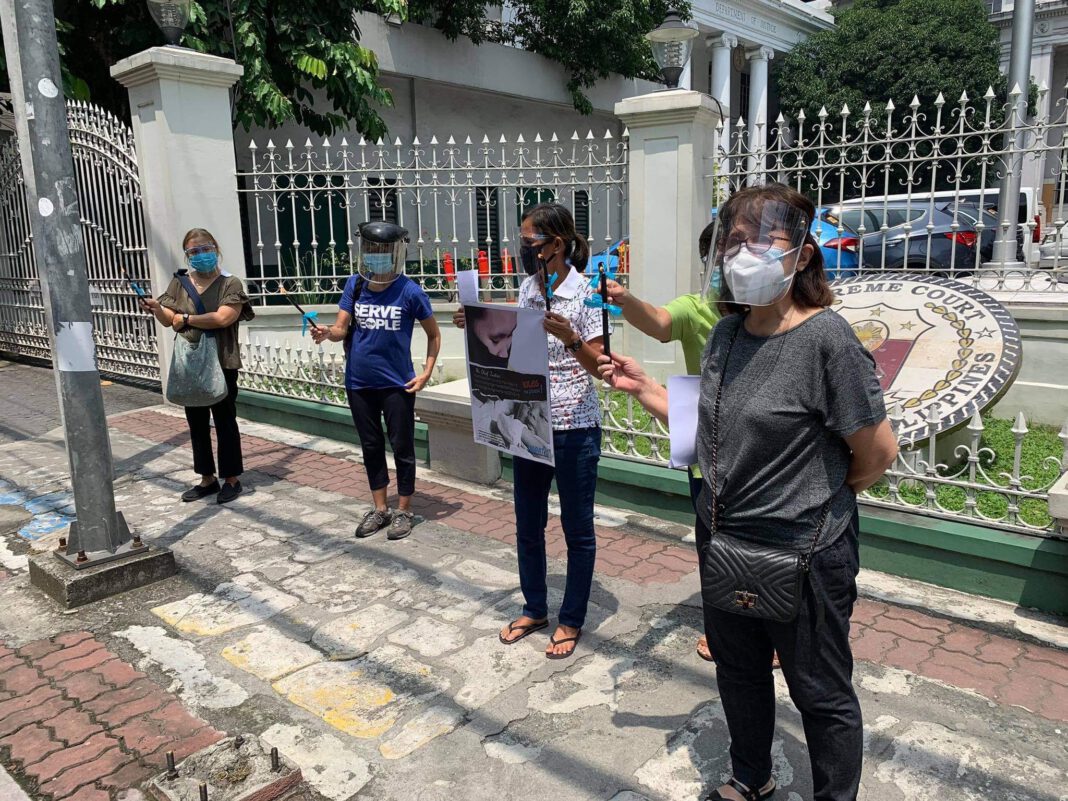 Political prisoners’ kin group KAPATID returned to the Supreme Court to remind magistrates of their 5-month old petition for “humanitarian” releases and to assail Duterte’s granting of absolute pardon to convicted US Marine Pemberton. This time, they lit black candles.

The at-risk political prisoners and their kin invoked the SC decision on Juan Ponce Enrile that justified the grant of bail because the former senator was old and in a fragile state of health. Former first lady and wife of dictator Imelda Marcos was able to use to her advantage the ‘Enrile doctrine,’ as the anti-graft court Sandiganbayan allowed her P300,000 post-conviction bail on 7 counts of graft charges in 2018, citing old age. In the decision of the court, she was sentenced to 6 to 11 years in prison for each case.

Human rights groups and kin of at-risk political prisoners worry that political prisoners who are “innocent” and “persecuted for their beliefs, actions and associations” would get infected with COVID-19 in the Philippine jails as cases and deaths were reported. The Bureau of Jail Management and Penology has recorded a 394% congestion rate in 2019. United Nations (UN) High Commissioner for Human Rights Michelle Bachelet called fort the decongestion of jails, particularly the release of political prisoners in March amid the COVID-19 outbreak.

Common among cases of political prisoners in the country were them being charged with non-bailable offenses of murder, arson or other crimes from incidents of the New People’s Army’s clashes with the Armed Forces of the Philippines in the hinterlands. Many of them said they have not even been to the locations of these alleged crimes of theirs. Other non-bailable cases charged were illegal possession of firearms, sometimes with explosives, that human rights groups claim to be planted. Murder or arson charges usually follow illegal possession of firearms and/or explosives cases. Some were first raided or arrested on search warrants and then charged with illegal possession of firearms and/or explosives, which human rights groups again claim as planted and a persisting pattern in activists arrests by police.

One such case against labor organizer Rafael Baylosis, arrested on the street and said to be carrying a gun and grenade on his hip or in his clothes, has been dismissed and Baylosis was able to walk free.

Among the at-risk political prisoners is Reina Mae Nasino, 23, one of three arrested in the office of BAYAN Manila in Tondo early November 2019 and was charged with illegal possession of firearms, which groups have decried as “planted evidence.”

She spent her entire pregnancy in jail and gave birth on July 1 at the Dr. Jose Fabella Memorial Hospital in Manila. Nasino and her newborn were sent back to prison a day after she gave birth. Nasino was afforded only one prenatal checkup and her counsels attribute this to the low birth weight and yellowish skin color of her daughter. Nasino and her baby were allowed to stay in a room where Nasino was able to nurse and take care of her baby, but was separated on August 13 when the baby was released to Nasino’s mother.

For months, groups have campaigned for her release and even Senator Nancy Binay called for Nasino and her newborn daughter’s release.

Another is Rey Casambre, 68, was charged with illegal possession of firearms and explosives in Bacoor, and murder and two counts of attempted murder in the hinterlands of Lupon, Davao Del Norte, where he had never set foot before he was arraigned. He has been imprisoned since December 7, 2019. He was onboard their car when arrested in Bacoor, Cavite with his wife, Cora, who was later released. Casambre suffers from type 2 diabetes and a heart condition. Casambre is a known peace advocate and also a Martial law survivor. Police said the couple were arrested as part of “Oplan Pagtugis” conducted to arrest wanted persons and “Oplan Paglalansag Omega” to seize loose firearms.

Adelberto Silva, 73, had a triple heart bypass in 2017 and his gall bladder has been surgically removed. He is among the NDFP peace consultants who were ‘re-arrested’ after peace talks fell through. He was arrested with four others on October 15 by virtue of a warrant of arrest related to the 15 counts of murder in the Inopacan, Leyte massacre or what activists have decried as the military’s “traveling mass grave” and has been used to charge activists and peace consultants.

Renante Gamara, 62, is hypertensive and has been trying to eat and live healthy before he was arrested, but instead developed asthma and allergic rhinitis due to congestion and poor ventilation in the jail. He was arrested with a retired priest, later released, on March 20, 2019 in Imus, Cavite. He was arrested on claims of illegal possession of firearms and explosives.

Ferdinand Castillo, 60, hypertensive and had bouts of arrhythmia and transient ischemic attack (TIA) known as mini-strokes. He was diagnosed with gout in 1983 and rheumatic heart disease in 1995 and was injected with medications for several years.

He was Bayan Metro Manila campaign officer at the time of his arrest.

He was arrested in the street in Caloocan City in February 2017 after attending a meeting with workers and was taken into an Innova vehicle. He was then charged with illegal possession of firearms that he said were planted on him. He was also charged with multiple murder and several counts of attempted murder allegedly committed in Calauag, Quezon, a place where he had never set foot.

Vicente Ladlad, 70, was arrested with two others on November 8, 2018 in Novaliches, Quezon City for alleged illegal possession of firearms. The raiding team said they recovered various high-powered rifles, pistols, ammunition, and grenades from Ladlad and his companions, that Ladlad’s wife and Kapatid spokesperson Fides Lim said were planted and obviously too heavy for the three to carry. Ladlad has chronic asthma, while one arrested with him has hip and leg injuries that their family and counsels said were aggravated during the arrest. Lim also scored the police for taking Ladlad’s hearing aid.

Other political prisoners who sought release on humanitarian grounds include:

Kin of other political prisoners wrote to the SC to plead for humanitarian release as well. Ram Carlo Bautista, who was arrested with Nasino, complains of swelling of the lymph nodes and suffers from frequent coughs and colds, and his family worries that would make him more vulnerable to COVID-19 inside the cramped jails.

Kin of Cora Agovida of Gabriela Metro Manila appealed for her release as well. Agovida was arrested with her husband and two sons inside their home in Manila by end of October 2019, a time when most people are busy for the holidays. Their narration of the ordeal of their arrest included police pointing guns at their sons, 10 and 2-year old, and ordering them to drop on the floor and then separating the kids from their parents at the jail, with the younger one only able to breastfeed after 24 hours.

Esterlita Suaybaguio, 60, was arrested on August 26, 2019. She was a teacher from Mindanao and was forced to move to Metro Manila when activists were threatened and persecuted in President Rodrigo Duterte’s martial in Mindanao.

Suaybaguio was arrested using a search warrant issued by Quezon City Executive Judge Cecilyn Burgos-Villavert. She is the same judge who issued search warrants in November 2019, which was used to raid the offices of Bayan Manila in Tondo and several offices of progressive groups in Negros.

The wife of Juan Alexander “Bob” Reyes, 49, also appealed for his release as Bob is suffering from hypertension. Reyes is a union organizer and was arrested on the street with another labor organizer in broad daylight, forced into a vehicle and blindfolded, after attending a workers’ meeting in Quezon City on June 2, 2018. Reyes was charged with illegal possession of firearms, but the police failed to present witnesses for the third time in a March 2019 hearing, while the illegal possession of explosives case against Reyes was then pending. However, he was also charged with three counts of frustrated murder in Agusan Del Sur, where he has never set foot. A charge for syndicated arson in the Agusan case was added in 2019.

According to human rights group Karapatan, they have documented 635 political prisoners, 11 of them are peace consultants in detention, 53 elderly and 95 sick among them all around the Philippines.