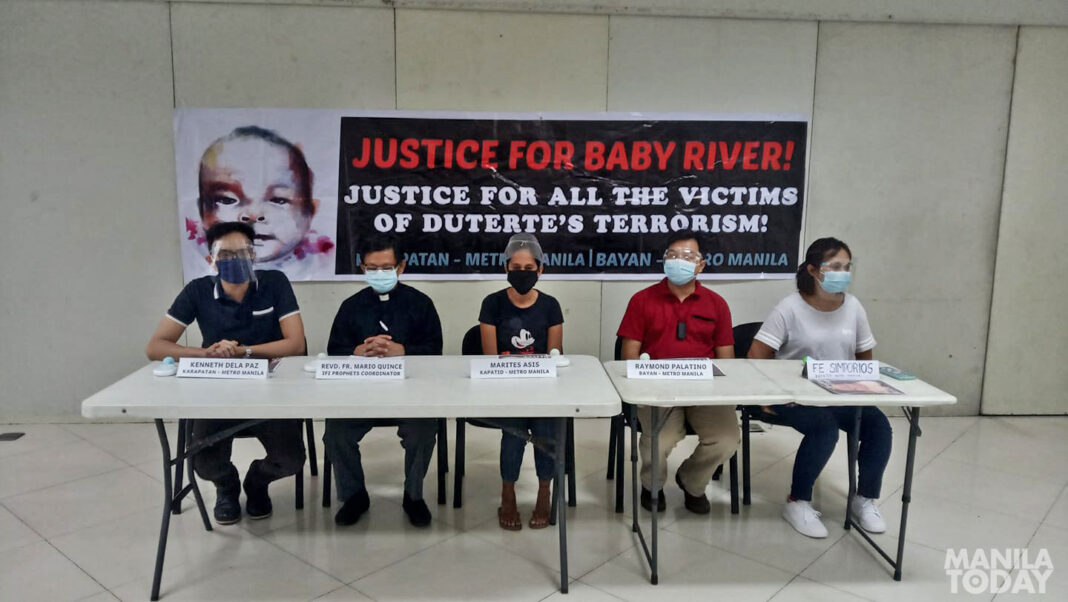 The family of political prisoner Reina Nasino is set to file an administrative lawsuit against Judge Marivic Balisi-Umali of Manila Regional Trial Court (MRTC) of Branch 20, said the mother of Nasino, human rights groups and lawyers on Thursday, November 19.

Judge Balisi-Umali denied the urgent motion of political prisoner Reina ‘Ina’ Mae Nasino and baby River to be moved to the hospital for adequate maternal care and protection from the COVID-19 in a court order dated July 20. Lawyers asked that mother and child be allowed to stay together in a hospital facility or jail nursery for a year so Nasino can take care of her baby who was born on July 1 with low birth weight, yellow skin discoloration and diarrhea.

A motion for reconsideration was also denied, the judge again taking the response of the Manila City Jail as basis for her denial, the warden supplying information on having no nursery for a newborn baby, that Nasino is feeding her baby formula milk and a Bureau of Jail Management and Penology (BJMP) Memo Circular 2010-02 dated August 12, 2010 that allowed mother and baby to be together only for a month.

Baby River was separated from Nasino, after more than 1 month in jail.

Nasino’s family and lawyers were concerned that the baby’s condition at birth were indication of Nasino’s difficulties in her pregnancy, spent almost entirely in jail. Nasino only had one pre-natal checkup and petitioned the Supreme Court (SC) for her release on humanitarian grounds, being vulnerable to COVID-19 in one of the country’s most overcongested jails. The petition was filed in April, when Nasino was five to six months along, but the SC released its July 28 decision to remand the petition to the lower courts on September—meaning back to sala of Balisi-Umali.

Baby River was rushed to the hospital on September 24 and passed away on October 9 due to pneumonia.

Marites Asis, mother of Ina Nasino, recalled the struggles of the family since they appealed for the release of her daughter along with the other political prisoners.

Nasino’s three-day furlough to visit the wake and join River’s burial was shortened by the courts to three hours each for two days, after the BJMP requested to reduce it for lack of personnel. However, the BJMP came with 47 escorts and tried to take Nasino away even before her furlough was up to prevent her from talking to media. Police took control of the burial, barring visitors on the last hours of the wake, racing away with the baby’s coffin to the cemetery and leaving the family behind. Nasino was surrounded by police, was cuffed the whole burial, and could only extend a finger to two to touch her baby’s coffin.

On November 17, in the mass 40 days since baby River’s death, police forcefully dispersed the candlelighting outside the Santo Niño de Tondo church, where the police attempted to take away the banner and even tried to grab and arrest some of the supporters.

Asis also questioned where can people seek help, because the family’s experience with police is marred with a violent use of force against them.

BAYAN Metro Manila spokesperson Raymond Palatino also stressed that the 40-days memorial of baby River is the first day of the new PNP chief Debold Sinas, who was promoted despite the infamous mañanita controversy and the series of crackdown against activists in Negros and Metro Manila, including Nasino’s case.

Palatino stressed that not only should the demand for justice and accountability to be directed against the court and the administration of President Rodrigo Duterte, but also to the elements of police and military under PNP and AFP which has long been perpetuating attacks and threats at the expense of basic human rights.