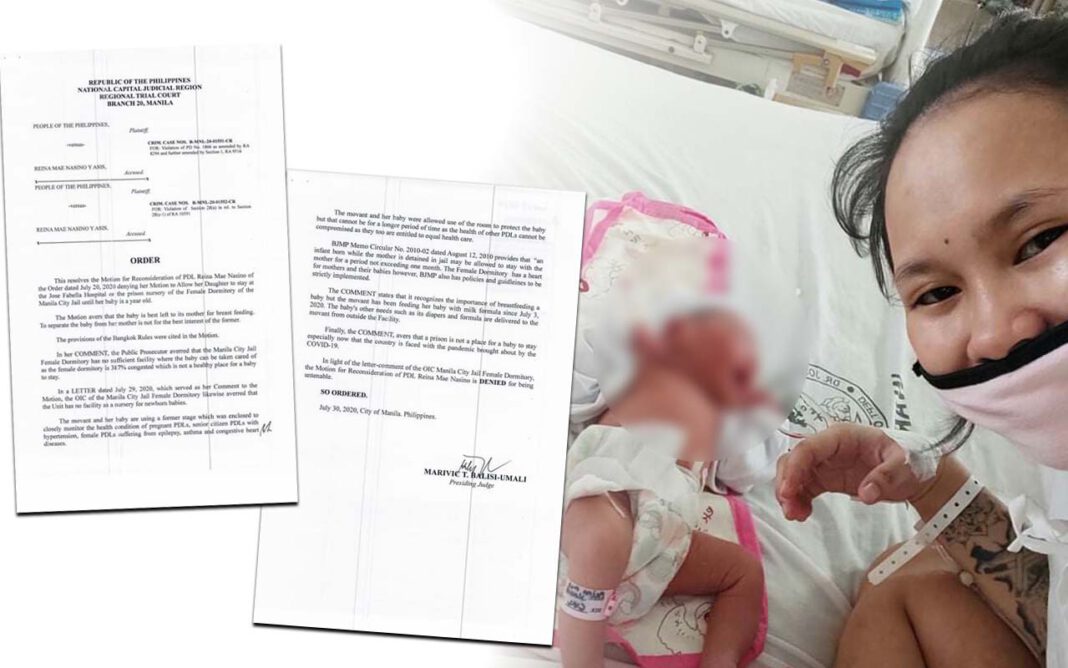 In a decision dated July 30, 2020, Presiding Judge Marivic T. Balisi-Umali of Manila Regional Trial Court Branch 20 denied political prisoner Reina Mae Nasino’s motion for reconsideration of the said court’s order dated July 20, 2020 that denied her request to stay in a hospital or the jail nursery with her baby until her baby turns a year old.

Nasino and her baby, now a month and 5 days old, is staying in the Manila City Jail (MCJ) Female Dormitory. Nasino was returned to jail with her baby a day after giving birth.

“With the threats of the coronavirus pandemic still worsening, the decision to take away a newborn child from her mother is a callous, inhumane act against a person who fears for her life and of her child despite the concerning fact that Reina Mae doesn’t deserve even a single day in jail,” said Fides Lim, spokesperson of KAPATID, a group of political prisoners’ kin.

The Public Prosecutor said that the MCJ Female Dormitory has no sufficient facility where the baby can be taken cared as the jail is 387% congested.

The comment from the Officer-in-Charge (OIC) of the MCJ Female Dormitory also said that the unit has no facility as a nursery for a newborn baby.

The OIC of the MCJ also invoked Bureau of Jail Management and Penology (BJMP) Memo Circular 2010-02 dated August 12, 2010 that “an infant born while the mother is detained in jail may be allowed to stay with the mother for a period not exceeding one month. While the Female Dorm has a heart for mothers, the BJMP has policies and guidelines that must be strictly implemented, it was said in the decision.

The comment also said that while it recognized the importance of breastfeeding, Nasino has been feeding her baby with formula milk since July 3.

“Going on mixed feeding instead of sole breastfeeding should not even be used as justification to sever the bonds between a mother and infant,” she added. “Always, mixed feeding would still require the presence of a mother to provide full care for her newborn. Even the animal kingdom is flush with cases how moms stay with their young and teach them how and what to eat to stay alive,” said Lim.

Nasino said when she was sent back to prison that she is also struggling in breastfeeding her baby because her milk supply is low. Another mother in the hospital helped nursed her baby.

A petition filed on April 8 by 22 political prisoners asked the SC’s “compassionate intervention” and “exercise of equity jurisdiction” for the “humanitarian” release of prisoners most at risk from COVID-19, especially inside the country’s congested jails. Chief Justice Diosdado Peralta told the group the petition could be decided on June 16.

“Reina Mae should have been free from the worst fears brought by the highly contagious disease had the High Court promptly and positively resolved the petition. What’s taking the Supreme Court so long to resolve the petition? We’ve been at the tribunal’s gates to appeal for compassion and relief many times now, but is anyone listening?” Lim asked.

Groups, as well as counsel for Nasino, have insisted they were arrested and detained on planted evidence.