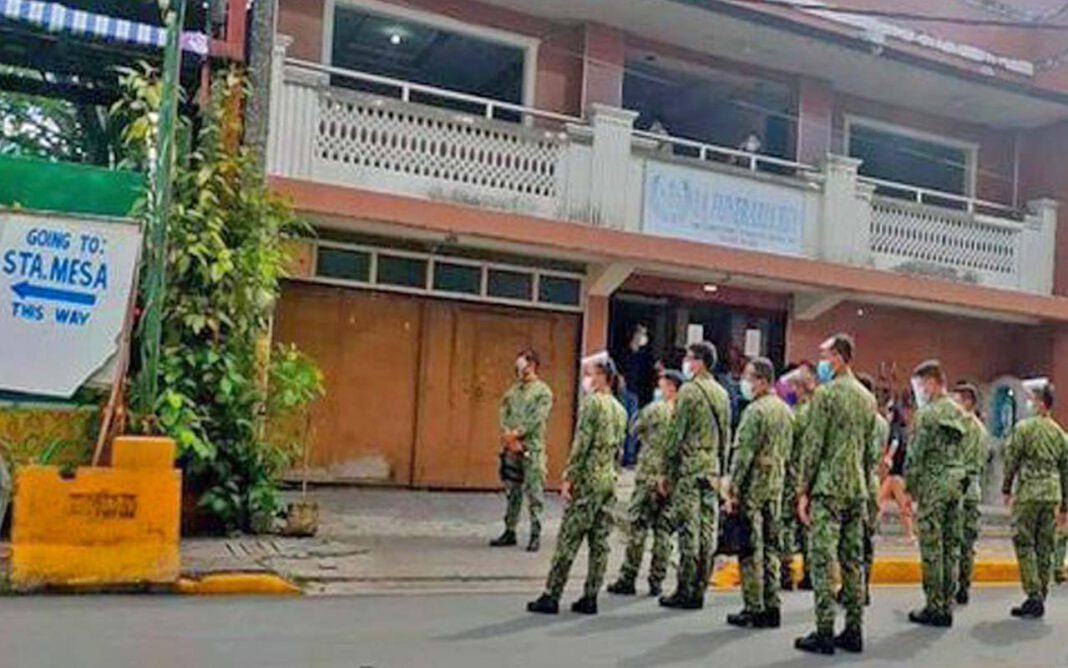 More than 20 police and a SWAT team and vehicle arrive early today, hours before Baby River Emmanuelle’s burial at La Funeraria Rey in Pandacan. Manila. Police prevented family and supporters from attending the mass and entering the funeral parlor to pay their last respects to the three-month old baby who succumbed to pneumonia on October 9.

Police also argued and tried to grab placards, most saying ‘Justice for Baby River’, from those assembling to join the funeral caravan to the cemetery. The police said placards were not allowed–on what law or ordinance, they did not say. However, there is no law that prevents bearing placards or expressing messages through them, especially taking in account the constitutional freedom to expression.

Police were expected to escort River’s mother, political detainee Reina Mae Nasino, to the burial in the last 3-hour furlough the court granted her. Family and supporters of Nasino and her baby did not expect that the funeral to be heavily guarded and police enforcing ban on entry, despite Nasino not being around. Nasino is expected to join the burial at the cemetery at 1pm today.

Maritess Asis, mother of political prisoner Nasino, even knelt before the police to ask them to allow the family and supporters to see baby.

Some invoke Manila Mayor Francisco “Isko Moreno” Domagoso to intervene and pull out the police from the burial.

Netizens decried the continuing injustice and inhumane treatment of Nasino and the bereaved family of baby River.

Nasino was denied to be with her baby who was born on July 1 with low birth weight of 5.5 pounds and yellow skin discoloration and also suffered from diarrhea. They were separated on August 13. Baby River was hospitalized on September 24, suffering from recurring fever, only a month and two weeks.

Nasino was denied to care for her baby while in critical condition, when at critical hours, the judge who earlier denied the motion and appeal for mother and newborn to be together, inhibited from the motion for furlough on October 9.

Many also decried that Nasino was denied to grieve her baby and grieve in peace. The motion was raffled to another branch of the Manila Regional Trial Court. She was then initially granted a three-day furlough, but the BJMP opposed this and proposed only three hours in one day, citing they have only 16 personnel for escorts. The court then reduced the furlough to three hours in the wake on October 14 and another three hours in October 16.

There were at least 47, however, who escorted Nasino and kept her handcuffed the whole time, except when she ate her meal. In that instance, political prisoners kin group Kapatid had to demand from police to remove her cuffs. They were quickly returned after she ate. Police also prevented Nasino from giving a statement to the media by trying to whisk her away even when her three hours are not up.

Nasino found out about her pregnancy in jail, after being arrested with two other activists in a police raid in the Bayan Manila office in Tondo in November 2019 via a search warrant that said to have found firearms and explosives. Their counsel and groups as well as human rights and activists groups decried these trumped up charges based on planted evidence.

The warrant was issued by Executive Judge Cecilyn Villavert, same judge who issued search warrants for police raids of activist offices in Negros and Manila days before the raid in Bayan Manila. Lawyers have been requesting to see the application for warrant that the judge acted on to issue the search warrant, but until now these have been withheld from them.