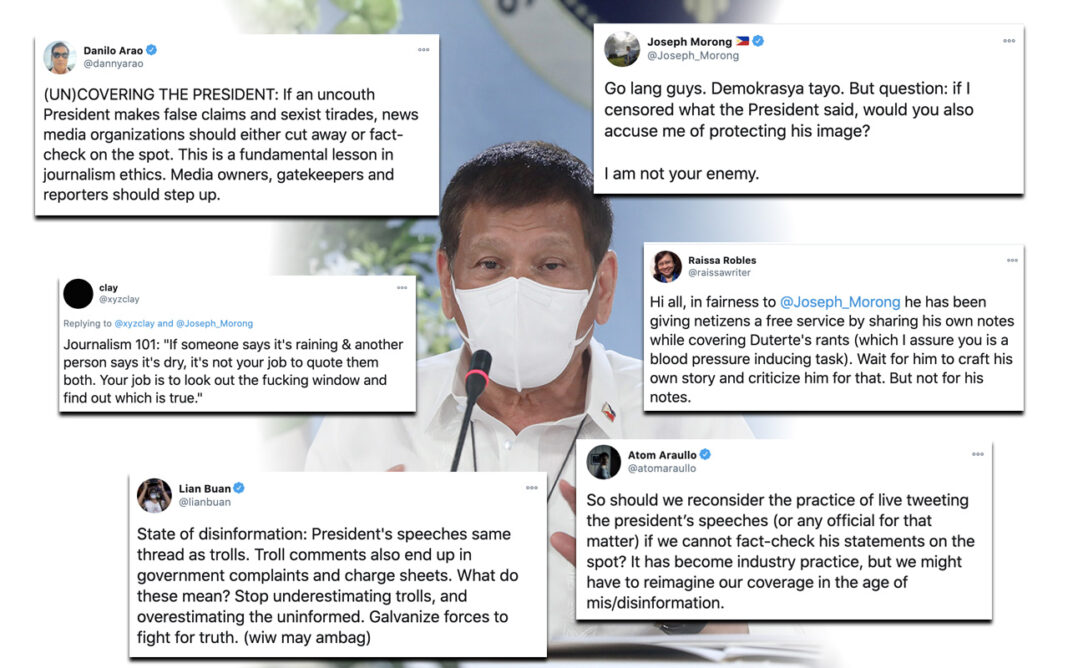 President Rodrigo Duterte’s speech late night on November 17 was seen an unraveling of the strongman, and #DuterteMeltdown became the top trending topic on Twitter. He hurled insults, lies, misogynistic remarks and challenges against Vice President (VP) Leni Robredo over the trending topic #NasaanAngPangulo and belittled Robredo’s initiatives during the typhoon. His detraction of Robredo on the context of what she was doing as “competing” against him was uncalled for, unpresidential, un-parliamentary–some of the stuff he has been doing all four years in his presidency.

Duterte enumerated the things he does or has done — how he chose which to count down is a question — as a president of a nation of 106 million and more should only normally have countless things to do. In Filipino culture, this is called as “nagbibilangan ng nagawa” (counting each other’s deeds towards one end), or the colloquial expression (if not negative trait?) “hindi naman sa nagbibilang” (not that we are taking or counting credit — but that is what really is happening). A meltdown, really.

With Duterte’s misinformation and lies rapid-firing, many netizens took exception with GMA News reporter Joseph Morong for live tweeting or sharing Duterte’s notes and called him out for not giving context or fact-checking immediately.

Many also pressed how media in the Philippines can take after what some big networks in the US did when US President Donald Trump claimed that the presidency was stolen from him. US television networks ABC, CBS and NBC all cut away from Trump during a White House speech, citing “false statements” and “unfounded conspiracies.”

Morong has been sharing his notes on the president’s speeches minutes after airing, and was largely thanked for it during the late-night or midnight-lockdown speeches of Duterte, because the notes gave a quick recap. Transcripts of Duterte’s speeches are available at the Presidential Communications Operations Office or PCOO website hours after airing. However, after the #DuterteMeltdown, live tweeting and notes may have revealed a lot more limitations to get to truth-telling, and has also become unbearable to some if it does not come with the needed context and fact-checking.

Morong aired his side.

Another veteran journalism gave context to the live tweets – in Morong’s case or any other.

What lessons can we learn from this? Some tweets on the discussion so far.

Many would push that context and fact-checking on the spot is needed, considering the nature of the person being covered or the proliferation of ‘fake news’ in recent years. (Some thought Trump coined the term, but it has existed way before him. But he might have been the first to link it to news media and popularizing the term by using it to describe any negative press coverage of himself.)

Another point from UP College of Mass Communication Journalism Professor Danilo Arao:

Another thing to think about – what we know of people’s situation on Twitter against what is happening on the ground?