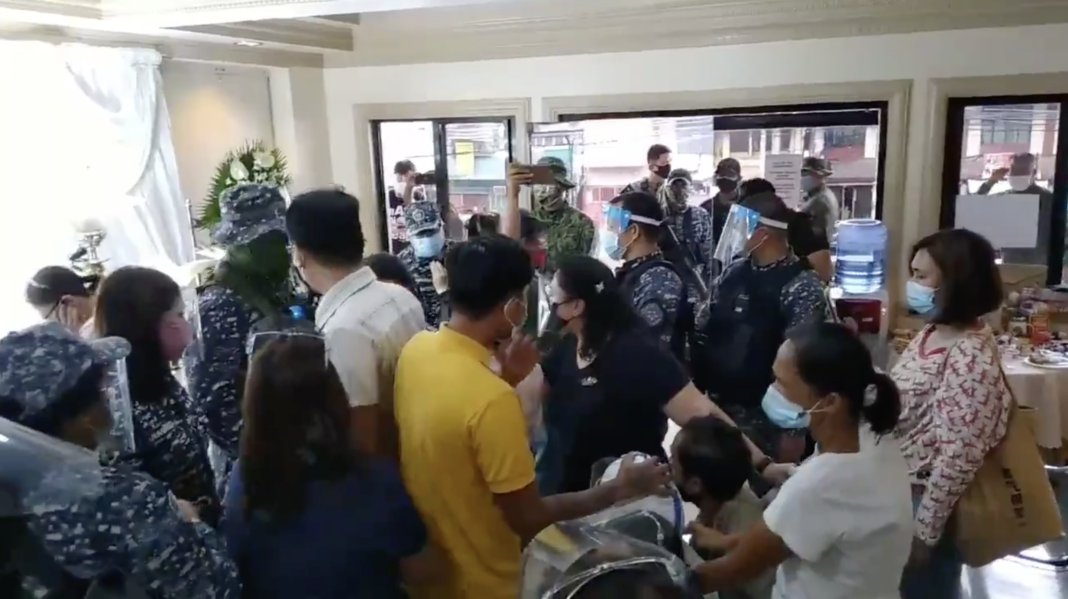 Video clips of a scuffle between police and wake-goers in political prisoner Reina Mae Nasino’s baby’s wake surfaced and made the rounds online at around 3pm. Police prevented Nasino from giving a statement to the media and tried to physically take her away, despite an hour left for her court-mandated visit to her baby’s wake. In the video, it could be heard that the police said Nasino cannot give an interview or statement, and was thus trying to enforce this by taking her away before her visit was up.

This did not sit well with netizens, sending the phrase ‘ang sasahol niyo’ (you are the worst) trending.

Many also cried injustice over the various circumstances leading to this moment that Nasino visited her baby’s wake for a limited time: from Nasino’s arrest, months of inaction by the Supreme Court in the petition to release Nasino as her pregnancy progressed and COVID-19 spread in jails even as thousands of other ‘vulnerable’ prisoners were released, denial of the motion and motion for reconsideration for baby and mother to stay together, the judge that denied the motions inhibiting from motion filed to allow Nasino’s furlough while the baby was still in critical condition, the grant of a 3-day furlough being limited to 3 hrs in 2 days due to the motion of the Bureau of Jail Management and Penology (BJMP). Others ask for compassion.

Netizens were also enraged with the ‘overkill’ police detail of Nasino that Manila Today counted to be 48, with 8 inside the room with Nasino, supposedly less should be allowed to ensure physical distancing, or else the occupants of the room would be mostly Nasino and the police.

Nasino wore personal protective equipment, mask and face shield. One of her hands were cuffed the whole time in her visit.

The BJMP countered the court’s grant of a three-day furlough to Nasino with only three hours in one day, saying they did not have enough personnel. Manila City Jail Female Dormitory even said they have only 12 personnel for out of jail activities. Manila Regional Trial Court Branch 47 revised its earlier decision and eventually granted 3 hours in two days, today and the day of the burial.

Nasino will have another three hours to attend the burial of River Emmanuelle on Friday.