Home OPINION Why we cannot accept the ‘why be afraid if you have not... 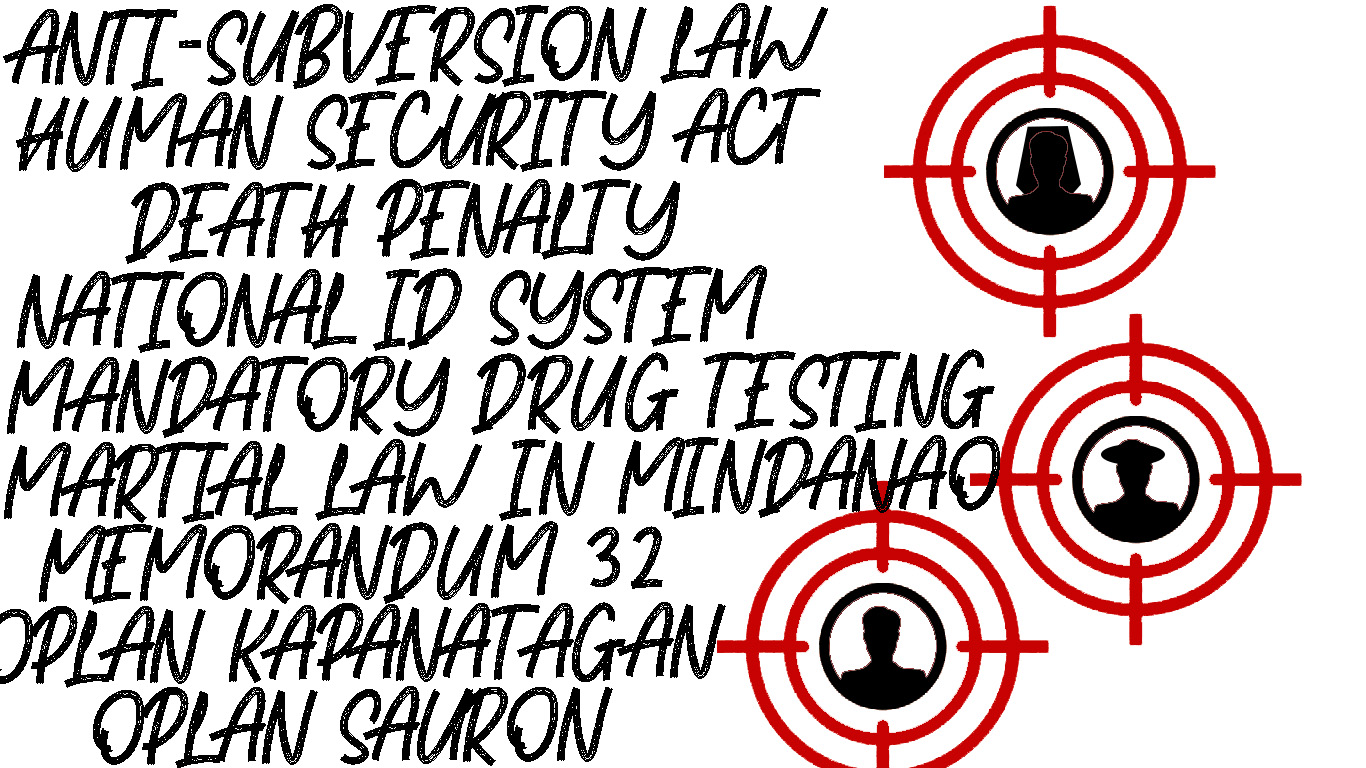 The administration of President Rodrigo Duterte is coming out with scheme after scheme to suppress people’s dissent towards its militarist, pro-China and anti-poor economic policies, more proposals from the Armed Forces of the Philippines (AFP), Philippine National Police (PNP) and its minions in the Senate and House of Representatives.

Some of these are the push to amend the Human Security Act, the push to restore Anti-Subversion Law, the move to revive death penalty, the mandatory drug testing implemented in various state universities, aside from the implementation of the National ID System law and other laws that, by nature or previous implementation, curtail the freedom of the people to raise grievances and make them susceptible to rights violations.

We must assert that the rights of the people to dissent must be upheld. Curtailment of this freedom is a violation of their constitutional right, as specifically provided in the Philippine Constitution Article III, section 4: “No law shall be passed abridging the freedom of speech, of expression, or of the press, or the right of the people peaceably to assemble and petition the Government for redress of grievances.”

In so many words or in different ways, we have heard the different proponents from Duterte’s Cabinet or military of these measures—ranging from repressive to draconian—to say “why be afraid if you have not committed any crimes?” In the government’s bid to hasten the implementation of these measures, the statement similar to the “nothing to hide” argument has been overused to the point of vulgarity.

The “nothing to hide” argument is oft-used in discussions on privacy. This argument states that government surveillance programs do not threaten privacy unless they uncover illegal activities, and that if they do uncover illegal activities, the person committing these activities does not have the right to keep them private. That if you have nothing to hide, then you should have nothing to fear. However, under Duterte’s tyrannical ways and the ever-decreasing room for rights to be exercised as more and more laws passed created loopholes to the people’s constitutional and universal human rights, the “nothing to hide” argument and its incarnations cannot be accepted.

In the context of the implementation of the Duterte regime’s counter-insurgency program, the ‘why be afraid if you have not committed any crime’ notion is dangerous. Duterte’s Executive Order 70 that created the National Task Force to End Local Communist Armed Conflict (NTF-ELCAC) and has a budget allocation of PHP 622.3M for 2020 does not provide any difference between armed groups and progressive and legal organizations. The joint forces of the AFP and PNP will implement the order they called Oplan Kapanatagan. In addition to this is the Memorandum Order 32 that aims to suppress “lawless violence” in the provinces of Samar, Negros Oriental and Negros Occidental and the Bicol region, an indirect declaration of martial law coinciding with the 2-year old martial law declared on the whole island of Mindanao. In Negros island, the local version is the Oplan Sauron that had already claimed 82 lives since the declaration of Memorandum Order 32.

It is unacceptable to progressive organizations and churches that work to uphold and defend human rights and respect the freedom of the people. They are the usual victims of this ‘psywar’ statement. From the point of view of the progressives, this statement is a justification to the intrusion of their rights, being as the actual targets of the government.

However, the ‘why be afraid if you have not committed any crimes’ if to be considered in a positive way can inspire us to not fear to stand up for what we believe is right. The Filipinos who had fought colonialists, dictatorship and fascist regimes did not stand idle.  The activists of today will not stop in expressing and asserting the peoples’ rights. They have no fear because they know that opposing fascist rule is not a crime. Activism is not a crime.

The Lumad and other indigenous peoples have offered hope because they did not give up their struggles despite continuing military operations and suffering of dislocation. The peasants give hope to the believers of genuine land reform though they suffered extrajudicial killings and the brunt of human rights violations recorded under Duterte’s presidency. The workers’ unions fuel hope to the jobless and contractual workers when they collectively assert the rights of the workers. The teachers and students, though they had been red-tagged and accused of being “NPA recruiters” over the years persevere in their struggle for academic freedom and oppose “martial law” in schools and universities, have provided hope to the people to continue fighting despite blatant, systematic attacks coming from no less than the government.  There is hope in the church people and human rights defenders who have not been cowed with red-tagging, vilification, physical attacks and trumped-up charges and who consistent call for the resumption of the peace talks.

The ‘why be afraid if you have not committed any crime’ is nothing with God.

“The LORD is my light and my salvation; whom shall I fear? The LORD is the stronghold of my life; of whom shall I be afraid? When evildoers assail me, uttering slanders against me, my adversaries and foes, they shall stumble and fall. Though a host encamp against me, my heart shall not fear; though war arise against me, yet I will be confident. One thing have I asked of the LORD, that will I seek after; that I may dwell in the house of the LORD all the days of my life, to behold the beauty of the LORD, and to inquire in his temple. For he will hide me in his shelter in the day of trouble; he will conceal me under the cover of his tent, he will set me high upon a rock.”