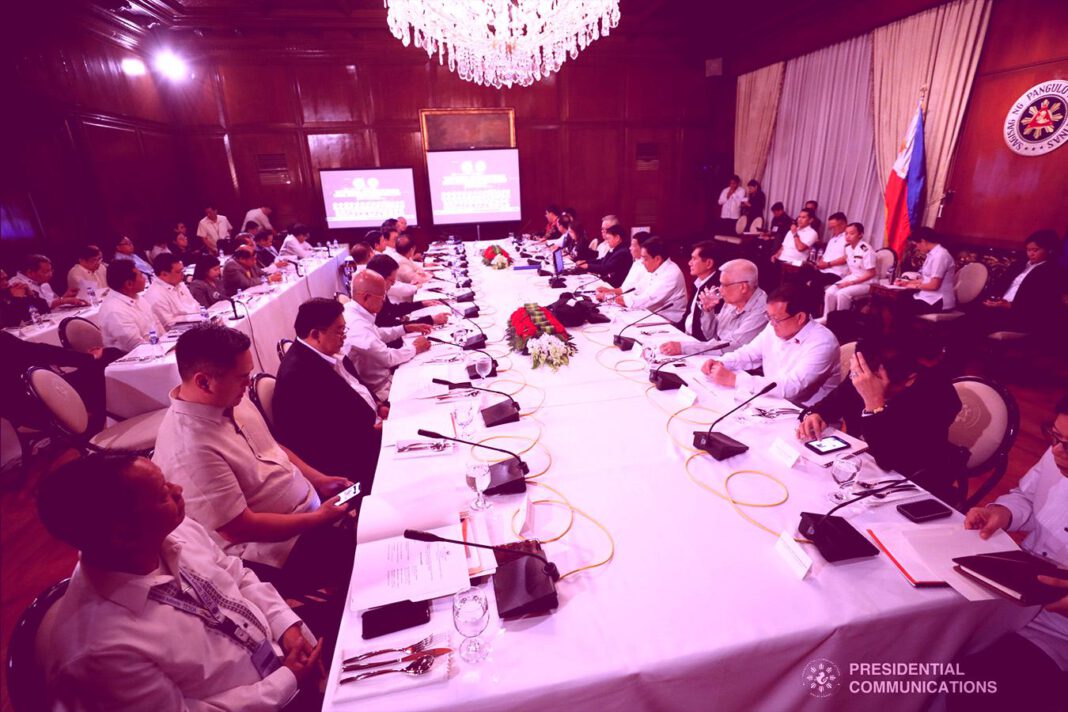 The National Task Force to End Local Communist Armed Conflict (NTF-ECLAC), a body heftily funded by the government and headed by President Rodrigo Duterte, red-tagged church groups, media organizations, human rights groups and activist groups in a post on May 29. Not coincidentally, it was after two House committees passed the Senate version of the Anti-Terrorism Bill to fast-track its passage into law.

The NTF-ELCAC was a creation of Duterte through Executive Order 70 on December 4, 2018.

The bill provides for the current members of the NTF-ELCAC to designate who they will suspect or tag as terrorists or their supporters (whether in intention, planning or commission of the intended, probable, pending or actual terrorist act) in the provision ‘preliminary order to proscribe’, without the need for the courts to decide.

“These are the open sectoral organizations, underground mass organizations, and allies established by the Communist Party of the Philippines-New People’s Army-National Democratic Front (CPP-NPA-NDF) disguising themselves as defenders and protectors of the Filipino people but who are, in fact, its most brutal. and savage oppressors and most cruel of persecutors,” the post opened.

Activists are ordinary citizens who belong to different sectors. And those that the NTF-ELCAC red-tagged would undoubtedly be the first targets, as well as probably the political opposition to Duterte’s administration, of the Anti-Terrorism Bill after tagging any of them as supporters or terrorists even only in intent in the broad definition of terrorism in the law.

They would use the law to arrest and detain without warrant members of these organizations or whomever they want to tag as terrorists – and during that extended period of detention, cull from them information to indict them as supporters or terrorists even only in intent in the broad definition of terrorism in the law.

“It is time that we close ranks and get back from these terrorists all that they have stolen from us- our beloved Motherland and our bright future as a people,” the NTF-ELCAC post ended.

Who are the church groups the NTF ELCAC is vilifying and that the military have long been harassing and attacking?

The Iglesia Filipina Independiente (IFI) was established in 1902 as a Church founded by Jesus Christ in the Philippines through the Filipino people led by the Union Obrera Democratica. The IFI participates in the struggle of the Filipino people for national independence and democracy.

The United Church of the Christ in the Philippines (UCCP) was organized in May 1948 with an aspiration that a Church of Jesus Christ must proclaim Him as Lord and Saviour in the life and struggle of the Filipino people.

The Promotion of Church People’s Response (PCPR) was organized during the Marcos dictatorship by nationalist and progressive church people and individuals in the Philippines which support the struggle of the Filipino people for democratic rights and national independence as call to serve God and people.

These church institutions and organization are legitimate and legal organizations. It is deplorable and condemnable to link red-tag them and treat them no different from the armed revolutionaries in the countryside, those who had given up hope in the current political and social system in the country and established their own. They are treated as enemies by the police and military who wield guns, but these church groups wield only their prayers, crucifixes, hands in service, voices and placards.

This intensified red-tagging and harassment endanger the life of the leaders and members of these Churches and discredit their legitimate missions and ministries and being direct targets of actual repression and attacks under the Human Security Act of 2007 as being rushed to be repealed with the under Anti-Terrorism Bill. This red-tagging is used to justify the approval and ratification of the Anti-Terrorism Bill.

The Christians for National Liberation (CNL) was once a legal organization. Until martial law declared organizations illegal.

It was founded before Ferdinand Marcos declared martial law (February 17, 1972) by church people who believed in an ecumenical response of serving the Filipino masses. The CNL then was a legal organization. When Marcos declared martial law on September 21, 1972, the leaders and members of CNL had no choice but to continue in propagating their faith and struggle through their actual participation in the armed struggle and other forms of struggle either aboveground or underground. The CNL is a founding member of the National Democratic Front of the Philippines (NDFP) that helped topple the Marcos dictatorship in 1986 and brought the leaders of the Government of the Philippines in the negotiating table from Cory Aquino regime until at present to resolve the armed conflict in the Philippines.

Until now, the NDFP urges the Duterte regime to drop its unreasonable policy of promoting local peace talks while intensifying combat operations in peasant and Indigenous Peoples communities and attacking of activists in urban centers through the direction of the NTF-ELCAC.

The IFI, UCCP, NCCP and PCPR recognize that the armed conflict in the Philippines is a result of the country’s problems of landlessness, export-oriented and import-dependent economy, gross violation of human rights and subservient to US and other imperialist powers.

Red-tagging these groups is an attempt of destroying the unity of their leaders and members and by doing so, it will shake their mission and ministry and eventually destroy the institutions. The propagators of this “black propaganda” missed the target. They should attack the regime that does not recognize and promote human rights and welfare of the Filipino people. They should stop this “red-scare tactic.” This is a work of the agents who are guided by the devils, the actual opposite of Jesus Christ.

The leaders and members of Churches founded by Jesus Christ submit to the call of Jesus for His followers to obey and follow Him even on the Cross. This call demands a self-emptying commitment and submission to Jesus’ calling of carrying a cross for national and individual salvation of a Filipino nation and people. A struggle for genuine and lasting peace is a struggle of Jesus Christ through the people and Churches in the Philippines and around the world.

We continue to pray, call and work for these: