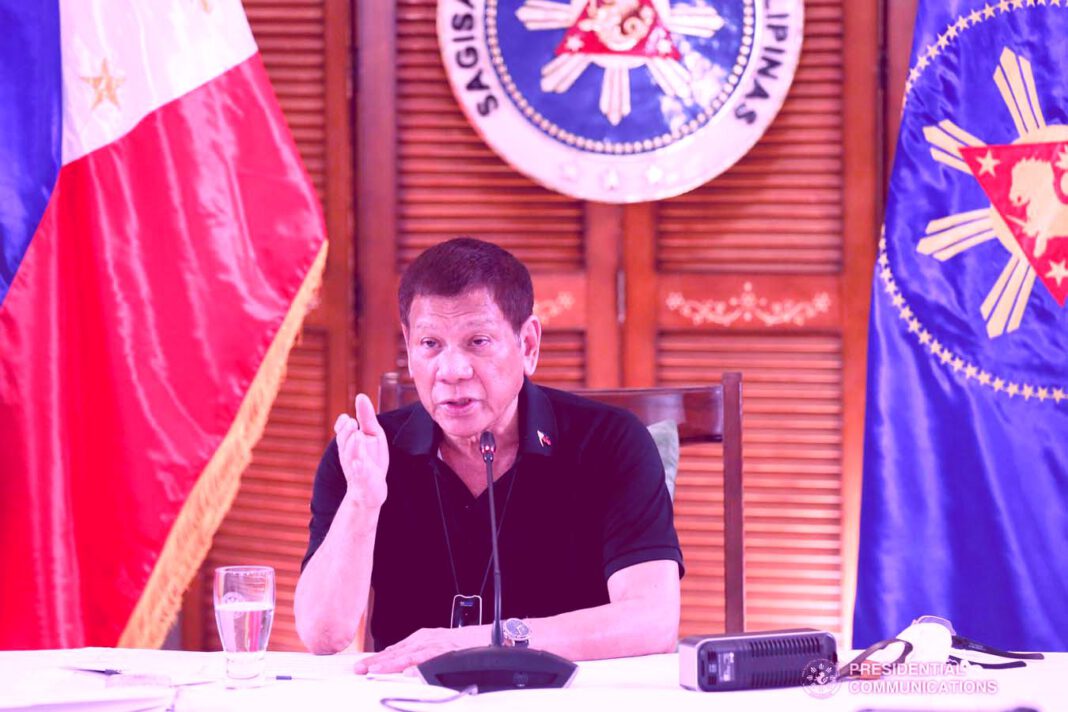 Late night of August 17, the recorded address of President Rodrigo Duterte to the Filipino people again opened with his explanation about the vaccine as the “only salvation available to humankind at this time of our life.” Not a doctor or scientist at all, he again took it upon himself how a vaccine will work in a human body. Although, Duterte recognized that acquiring the vaccine would come at great expense.

We did not need Duterte explaining to us about the vaccine; he is not the expert on that. The Philippines is not even in the race to produce one. But that he could not say what the concrete steps are to acquire this vaccine yet to be mass produced and tested locally—that’s what he was supposedly needed for. This has become regular repetitive, useless talk. The public has been asking for the government’s concrete plans to curbing the pandemic—which we have not and which has only increased tremendously after five months, with those who tested positive breaching the 200,000-mark on August 16—and plans to recovery which we will embark on with the pending government pandemic response legislation adopting the word ‘recover’ in its title despite not really recovering.

Duterte thanked the Presidents of Russia and China “for offering to provide us of the vaccine as soon as it is possible for distribution to the public.”

Duterte said, “Bibilhin natin yan, kaya lang kung mahal, if it is quite expensive, then I will ask my friend, (Russian) President (Vladimir) Putin and  (Chinese) President  Xi Jinping to give us a credit, parang utang, credit line that we will pay not in one payment but by installment, basta ang sinsabi ko, magbayad tayo, hindi ito libre…we are willing and if we are short of money by this time because all of the economy of the world individual country have fallen flat, lahat ngayon ay nagkaroon ng economic hemorrhage.”

The vaccine is not free. Finally, he mentioned it was not for free. He has been thanking China and Russia profusely for their promise to allocate vaccine supplies for us when they would be made available to the public as if they would be handing it to us like a cake on our birthday.

It is obvious that vaccines from Russia, China and other countries are not free. Duterte is just conditioning the people of accepting the fact that the country has to spend for this but the country has no money. In turn, he has to borrow and to borrow and be allocated supplies he had to be friendly with Russia and China—and entertain everything else they would ask in return. These foreign relations, like the vaccine, does not come free from ties or interests.

Duterte was trying to impress to the people there is no problem or shame with borrowing (again and again) because countries all over have experienced “economic hemorrhage.”

But the Philippines did not experience this economic crisis and this debt dependency only now. The economic crisis in the country has been brought on by the nature and character—the status quo—that  politicians were made to maintain. A backward economy made to export its raw materials but import finished products many times more expensive from countries who are our “friends.” An underdeveloped industry mostly now in service and manufacturing coming only second. A big agricultural potential lost to land conversion and intensive foreign agri-business for export products like banana, pineapple, rubber, palm oil, cacao and others. Before COVID-19, the Philippines has a worsening economic crisis with PhP 7 trillion domestic and foreign debts. The SWS joblessness survey also showed that half of the jobless 45.5% (27million) have lost their jobs even before the pandemic.

The Department of Finance Secretary disclosed that “the pandemic has already forced the government to borrow P1.22 trillion from January to April.” In June 2020, the Philippines has a total of Php 9.05 trillion local and foreign loans. As of June 2020, every Filipino (out of 108.7 million) has a share of P83,239 of Php 9.05T debt.

“The repayment will come from our taxes in the future. And our taxes will come from healthier Filipinos working from returned economic growth starting next year. So the debt is very manageable and it is affordable for us,” Sec. Dominguez said on July 8, 2020.

Paying the interest of the loans alone is burdensome. The Philippines is still paying the loans plundered by ousted dictator Ferdinand Marcos.

Before the pandemic, the people are suffering with heavy taxation imposed in all aspects of basic commodities. These sufferings are aggravated with corruption and plunder that siphon money away from social services, all at the expense of the basic masses. Corruption in PhilHealth is just one of so many long-ingrained corruption in all government agencies. However, in the case of PhilHealth, corruption stank went out and there are some who can exploit it in their interest (especially those who are planning to run for the 2022 elections), thus out the smoke went. Out went and fizzled also Duterte’s strongman declaration of not hesitating to remove from office officials in agencies where he head even a whiff or whisper of corruption. P15 billion in a few months is neither whiff or whisper! P200 billion in years is neither whiff or whisper! It is akin to that explosion in Beirut. This makes the oft-repeated declaration ‘wala nang pera’ (no more money) all the more enraging.

So many other departments controlled millions or billions of funds during the pandemic. They, too, should be placed under special audit and investigation, especially as many whispers have been heard. When the government likened the giving of COVID-19 emergency subsidy to what is done during the elections, the picture of vote buying comes to mind. Like ‘flying voting,’ we could only hope the dead were not among those listed eligible and have received the government’s Social Amelioration Program!

As the country will continue its lockdown policy until December 2020 or beyond, the economic crisis will be felt not only by the basic masses but by the whole Filipino people. Only the operators and implementers of National Task Force COVID-19 or National Action Plan for COVID-19 will not be hurt. They would continue to get their hefty salaries, work with government resources, control the people’s funds from the national budget, and they would also continue to get frequent (weekly) RT-PCR COVID-19 testing.

The more than 7 million people (according to DOLE in June; 14M according to Ibon in June; 27M according to SWS in July) who lost their jobs during the pandemic will increase as days go by. As the number of individuals infected by COVID-19 increase day-by-day, the despairing situation of helplessness, joblessness and hunger must be turned into the hope of changing the operators to “flattening the curve” of COVID-19.

The Department of Health (DOH) public information campaign “Takot Ako sa COVID-19” is trying to scare people into submitting to their health protocols—which the people cannot be blamed for being unable to do due to the government’s lack of aid and lack of concrete plans and services to be there for the people during this time, the police/military double standards in enforcing the government’s guidelines, the Health agency constantly changing definitions to make its data look better and several spokespersons spinning interpretations for the numbers. But numbers – even those not “confirmed” yet but only positive – don’t lie.

Duterte, for his part, continues in his administration’s counterinsurgency program that targets activists and critics with their advocacies and opinions instead of revolutionaries who like his state forces have guns. The petitions against the Anti-Terror Law are pending at the Supreme Court, but state forces are now on a rampage. It seems that the policy of planted evidence and filing trumped-up charges is now shifting to a “take no prisoners” policy with the killing of Randall Echanis on August 10 made to look like a common crime and the August 17 killing of Zara Alvarez in the Gloria Arroyo regime (another idol of Duterte) style of extrajudicial killings.

Duterte cannot help but ramble against human rights groups and defending his war on drugs in his speech. He threatened to deal with those who deal with drugs, and asked them to chose between Manila Bay and “China Sea”–and then cursing who he is cursing for making that slip of the tongue “China Sea.” But the war on drugs methods are today being committed against activists and critics, common among them were being red-tagged by this government prior their deaths.

However, the people must be reminded that August is a “revolution” month. On August 26, 1896, the Katipuneros tore their cedulas and cry for “Kalayaan, Kalayaan, Kalayaan!” The same awakening must be felt. The “revolutionary spirit” of the heroes of the Philippine revolution must live through Filipinos today regain the democracy and independence they are fighting for. The churches would be with the people this time.

“As I have stated time and again repeatedly that the only salvation available to humankind at this time of our life is if you are stricken with a virus, the answer is always vaccine,” Duterte began. But there were so many loans, so many money lost to corruption and no money for the vaccine yet to be produced–what now, Duterte?

If the government who has squandered hundreds of billions of pesos could only offer a solution that is not there yet, the people must be then take charge for how this story shall go and how it will end. The end of this administration might become the only respite from the worst COVID-19 situation in the region and the worse economic and unemployment crisis in history yet.

No to Popularity, No to Dynasty

On the removal of ‘subversive’ books