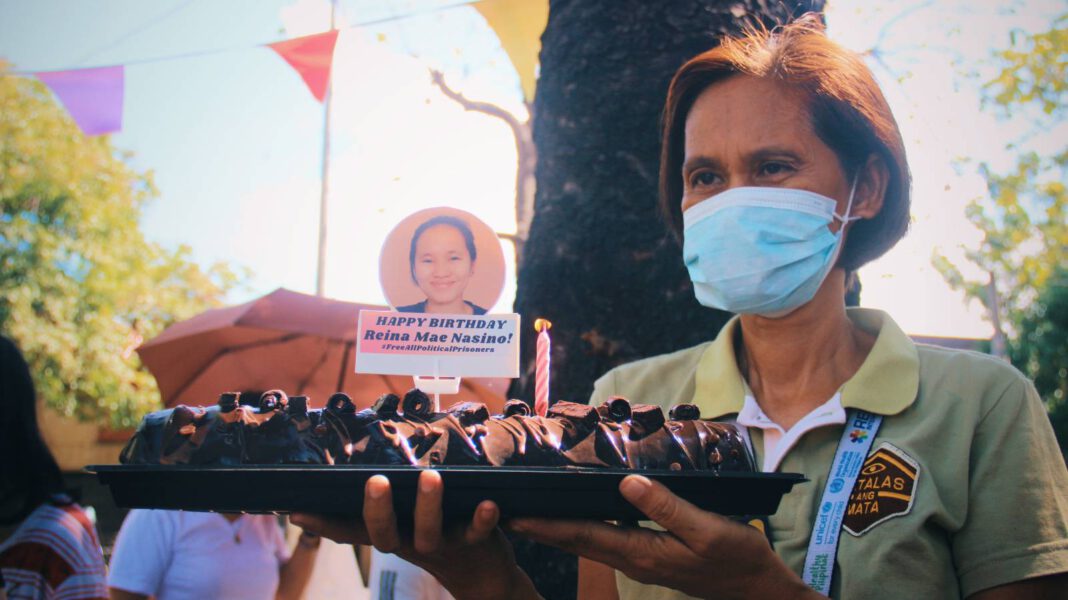 Asis volunteered in a community pantry initiative at Bacood, Manila. That was a way that she thought of ‘representing’ her daughter’s deeds on her birthday.

She led the distribution of goods to show her gratitude to all those who supported and campaigned for Nasino’s immediate release and for the support and empathy people showed during the wake of her grandchild Baby River. River died at only three months old and only a month after she was separated from Nasino.

Nasino turned 24 on June 5. This was the second year she spent her birthday at the Manila City Jail (MCJ) Female Dormitory.

It was on the eve of Ina’s birthday that she video-called her Tita Vicky to request pansit and biko (rice cake).

Asis said she would only weep if she was the one who receives Nasino’s video calls, usually limited to at least 5-10 minutes.

Jails under the Bureau of Jail Management and Penology had implemented e-dalaw (e-visit) or video calls since physical visits were prohibited since the jails were placed on lockdown, following also the lockdown due to the pandemic since last year.

Despite Nasino’s cheerfulness in her calls, she knew as a mother how difficult the situation had been for her daughter.

[As a mother, I do not like seeing my daughter in jail.]

But it was only Nasino’s sister Alex who usually tells Asis how the video-call went.

Nasino would joke around and she would always say they are okay, and that they are finding ways to while away their time.

Asis said she would still prefer if she can hold Nasino in her hands, hug her and see her face in person.

Asis said she remembered how she gave birth to Nasino as if it was just yesterday. A mother could never forget, it seems, the pain and joy of giving birth and the pain and joy she saw her offspring endured.

The activist mother affirmed that the pain has doubled: from Nasino’s detention to Baby River’s passing. She said she still cries when she remembers what happened to Nasino and Baby River.

But then, she would worry what more pain could Nasino have been feeling.

[My wish is for her to be free, of course. She shouldn’t spend her life time there. She needs us and we need her.]

She also wished Nasino could visit Baby River at the Manila North Cemetery.

[I am not brave like my daughter. I am only trying to be brave now to seek the justice she should have long received.]

They relayed they were sleeping at the BAYAN Manila office when the policed barged in on them on November 5, 2019. Nasino and Moran were together in the same room, they were made to lie on the ground and had no vision of their surroundings for about an hour. Only after such time has passed when the police said the search will commence and then the planted evidence of firearms and explosives were found.

They were charged with illegal possession of firearms and explosives, known as the usual cases slapped against activists who were arrested via search warrants or apprehended on the road or moving vehicles with no warrants during the present administration.

Progressive groups coined the term ‘Villavert warrant’ after the issuing judge of several search warrants against progressive groups in Quezon City or outside, such as Manila, Mandaluyong and Bacolod City.

Burgos-Villavert is also the same judge who issued the search warrants which led to the arrest of activist couple Cora Agovida and Michael Tan Bartolome inside their home with their 10-year old and barely 2-year old sons, happening only five days before Nasino’s arrest.

Agovida and Bartolome’s arrest happened on the same day as the arrest of 58 activists, workers, peasant leaders and a journalist in Bacolod City, also through police raids via search warrants issued by Villavert.

The most recent Villavert warrant led to the arrest and detention of the Human Rights Day 7 before the end of 2020.

At least two Villavert warrants have been declared null and void.

The warrants against Manila Today editor Lady Ann Salem and Samahan ng Manggagawa sa Quezon City (SMQC) organizer Rodrigo Esparago, among the HRD7, were declared null and void by Mandaluyong court on February five and the two were released on March 5. The judge granted the motion to quash filed Salem and Esparago’s camp.

However, other judges deemed to accord the issuing judge ‘presumption of regularity’ or saw it did not need a new determination of probable cause in the issuance of the warrants

Nasino’s trial judge in Manila did not subpoena the records on the application of the search warrant from Villavert which would include the transcript and documents that Nasino’s counsel needed to be able to file a motion to quash warrant.