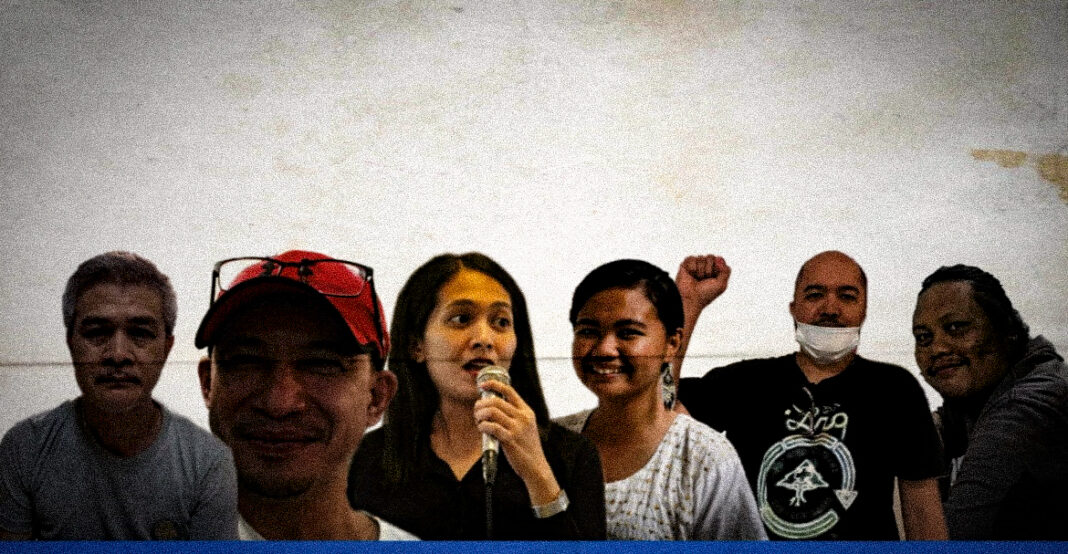 Alleged guns, grenades, and ammunitions were confiscated by elements of Criminal Investigation and Detection Group (CIDG) National Capital Region and Philippine National Police (PNP) during the wee hours, at about 2:00 am, under the so-called “intensified campaign against loose firearms and criminal gangs”. Barangay officials are said to be witnesses ahead of the conducted raid operations.

It must be noted that Villavert is the same judge who issued the search warrants following the wide crackdown last year which led to the series of arrests among activists in Manila and Negros.

Velasco is a member of Defend Job Philippines; while Astudillo, Cruz, and Gregorio are members of labor group Kilusang Mayo Uno – Metro Manila.

Demate is a member of Solidarity of Labor Rights and Welfare. Esparago, meanwhile, is an organizer of Sandigang Manggagawa sa Quezon City.

The seven were charged with violation of the Comprehensive Firearms and Ammunition Regulation Law (Republic Act No. 10591) and the Illegal Possession of Explosives Law (RA 9516).

‘Because MT was red-tagged‘

At around 9:00 am, a building caretaker called the staff of Manila Today (MT) informing that a raid operation took place with which the elements of the Philippine National Police (PNP) and Criminal Investigation and Detection Group (CIDG) National Capital Region have conducted.

Afternoon came, Karapatan Metro Manila confirmed that Salem is found along with other three individuals whom are also declared missing in the CIDG-NCR headquarters in Quezon City. Soon as the legal counsels arrived and got inside the headquarters, the SWAT vehicle with Icy inside sped off and reached the Pasig City Police Headquarters along C. Raymundo Avenue in the municipality of Pasig.

Icy’s brother-in-law and sister, Jasma Salem, fled onto the highways in what seemed like a tail following the tracks of the vehicle along EDSA to C5 Road for more than an hour until it reached the Camp Bagong Diwa in Taguig City as its final destination.

“Hindi totoo ang mga ibinibintang sa kanya. Pumupunta po ako sa bahay ng ate ko, wala po talagang (baril),” Jasma further decried the allegations made by state authorities against Icy. She also worried as to what Icy would eat or even wear after the police did not approve them to give food and decent clothes for her sister.

In Camp Bagong Diwa at 5:24 p.m., Jasma was able to talk to a police officer and told her that Icy is about to take her swab test in Special Care Facility 3.

Icy has worked with the alternative media community and is one of the founding members of Altermidya Network. She is an alumna from the UP College of Mass Communication and a fellow of the Lopez Jaena Community Journalism Workshop. She is also recognized as a board member of Tudla Productions and the current communications officer of the IAWRT. Further, she became part of the Metro Manila chapter of National Union of Journalists of the Philippines (NUJP).

Along with various alternative independent media outfits in a Senate Hearing on December 1, Manila Today had been red-tagged by the controversial National Task Force to End the Local Communist Armed Conflict (NTF-ELCAC) and even branded the online news platform as “communist fronts”.

“Her abduction, on Human Rights Day no less, is another proof of the dangers of the administration’s vile practice of red-tagging,” Altermidya said in a press statement. Furthermore, the IAWRT Philippines with which Icy had worked as a member officer found her being “a good friend and hardworking colleague”.

“(Lady Ann) has demonstrated strong commitment to her work as a journalist and as communications officer of IAWRT International.” IAWRT Philippines said.

Trade Union Organizer Dennise Velasco was initially reported to have been raided in his house at Lagro, Quezon City.

His wife, Diane Zapata, was able to put up a Facebook live an hour after since the raiding team had arrived. Accordingly, they were informed that there was a warrant of arrest for Velasco. Zapata also said that they were asked to drop to the floor while facing down for about an hour prior to the search conduct.

In Zapata’s Facebook post, she firmly denied the accusations being brought by the police against her husband with which firearms, grenade, and ammunitions as well as “assorted suspected subversive documents” were recovered on Velasco’s possessions.

Velasco has been actively campaigning various labor demands against contractualization and disputes among workers in PLDT, Jollibee Foods Corporation, Regent Foods Corporation, Super 8, Pepsi, among others. Along with this, he also participated in several disaster relief efforts for the victims of Typhoon Ulysses in various areas in Metro Manila.

Defend Jobs Philippines (DJP) lambasted these accusations, citing that the charges against Velasco were based on fabricated evidences.

“These kind of attack and harassment against trade unionists and labor rights advocates must end. We cry foul over Velasco’s arrest being done in time of Human Rights Day,” DJP said in their statement.

“We call for the immediate and unconditional release of Velasco as this is a clear harassment against labor rights advocates amid the crackdown being executed by the Duterte government against its critics, progressive groups and human rights defenders,” the labor group concluded.