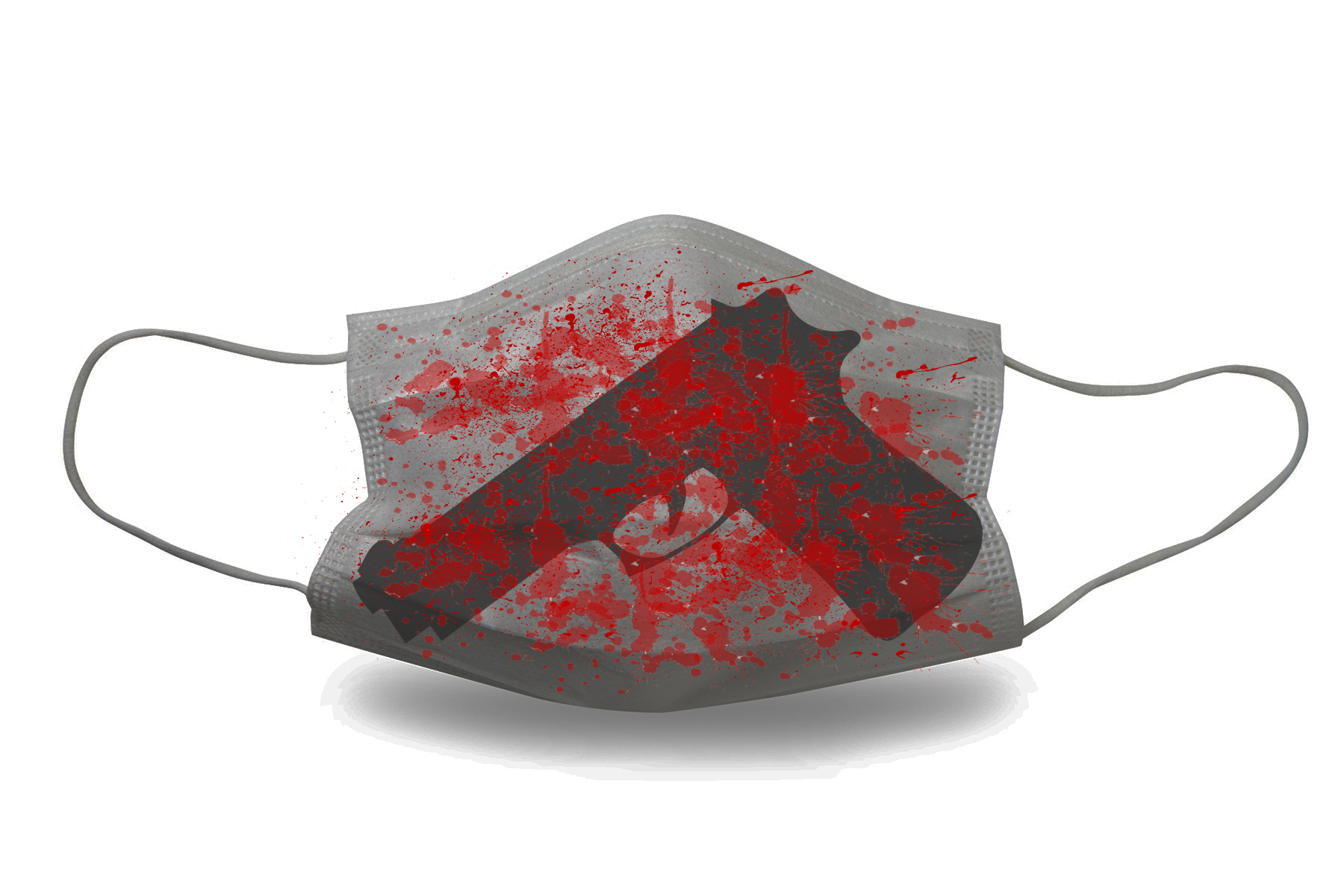 It’s been a year since the pandemic ravaged the world. Many countries are now implementing mass vaccination programs and slowly regaining their pre-pandemic day-to-day lives. The Philippine’s case, on the other hand, went full circle.

Although the vaccine has been developed and has arrived in the country, the government is still stuck in the same paradigm: a response that does not aim to prevent the transmission of disease but to punish, intimidate, and suppress people in varying forms — from arbitrary detention, humiliation, to outright violence.

Injury or death by ‘quarantine violation’

On April 1 at around 10pm, two residents of Brgy. Paliparan III, Dasmaricas, Cavite were shot by a volunteer of Bantay Bayan Foundation, an organization that serves as quarantine enforcement in the area. Based on a social media post by Mark Datul, son of one of the victims, his mother was pleading with Bantay Bayan volunteers to let their neighbor go while the latter was being apprehended for not wearing a mask. One of the volunteers fired a gun that inflicted on his mother and uncle some minor wounds.

Following this is the case of Darren Manaog Peñaredondo, 28, who died after being forced to do 300 body pumping exercises—also called knee-bender and a known sanction handed to persons-deprived of liberty for small incursions in jails—for violating curfew rules. He was arrested on Maundy Thursday, April 1, was released on Good Friday and died later that day.

This kind of corporal punishment is still taking place although the Department of Justice (DOJ) ruled that there should be no sanctions for curfew violators. The Commission on Human Rights is set to probe his death and appealed to all Local Government Units (LGU) to refrain from using similar methods.

These deaths via ‘quarantine violation’ did not start this year.

When panic and confusion brought by Enhanced Community Quarantine (ECQ) broke out in March last year, President Rodrigo Duterte himself told the military and police to shoot violators if they feel that their lives are at stake.

This very proclamation trickled down to the ground – to the stooges of LGU’s – which gave restrictive powers to a typical barangay volunteer. This new power conveyed a hostile notion of authority which of course led to abuses. Whether it’s ECQ, Modified ECQ, or General Community Quarantine, there are always reports of harassment and violence towards “quarantine violators”.

The nation was shocked by the murder of retired soldier Winston Ragos, who was shot dead on the spot for allegedly violating quarantine protocols and allegedly carrying a gun. The gun was ruled out by the National Bureau of Investigation as ‘planted.’

According to different grassroots and human rights organizations, several forms of power abuse perpetrated by government officials and their hirelings became more widespread ever since the country was placed under quarantine and lockdown.

The administration and the police repeatedly warned about arrests of quarantine violators, resulting to thousands or arrests and detention.

These are usually warrantless arrests, usually for being ‘caught in the act,’ which even the Department of Justice defended citing Republic Act 11332 or the Mandatory Reporting of Notifiable Diseases Act, that punishes “non-cooperation” in a health crisis.

However, different criminal cases under the Revised Penal Code are being slapped against quarantine violators, such as disobedience to authority and resisting arrest among others, usually when those apprehended are reasoning out against their apprehension.

Even concerned citizens who try to help the impoverished were subjected to the same treatment. On the first of May, members of CURE-COVID, a community-based volunteer group, were arrested while distributing food in Marikina.

A friend of mine, Kevin Martija, who currently teaches in the University of Makati, experienced a similar scenario. While trying to buy food in broad daylight last April 4, he was taken to a precinct and his was taken a mugshot by policemen because he did not have his name written on his quarantine pass.

Martija said that it was ridiculous because there was no actual violation since he was wearing a mask that time. The Inter-Agency Task Force (IATF) said there should be no corresponding criminal offense for being outdoors despite not being an ‘Authorized Person Outside of Residence.’ This should only make sense especially as the quarantine restrictions were being relaxed.

In a press briefing two days before the 2nd ECQ started, Presidential Spokesperson Harry Roque announced that quarantine passes will no longer be issued. He assured the public that old passes are still valid and one can simply explain the need of procuring essential goods when passing through checkpoints. This statement was met with skepticism because the people are already wary of checkpoints and with Martija’s case and many others, they have guessed correctly.

Few days after, a barangay chairman in Parañaque was lambasted for forcing people to sit under the heat of the sun which can be considered as a form of torture.

In the following month, another barangay chairman drew sharp criticism after coercing three LGBT persons to kiss, dance, and do push-ups for violating the curfew.

A good example here is the “lugaw” incident in Brgy. Muzon, San Jose del Monte, Bulacan where barangay officials denied the entrance of a food delivery guy. Officials of Brgy. Muzon proudly exhibited their ignorance to the point that the Palace itself has to declare ‘lugaw’ an essential.

But despite this declaration, the Philippine National Police added fuel to the fire and released an official statement implying that a dish can be only considered ‘essential’ if it is “legitimately delivered.” Whatever that means.

One more incident that sparked online outrage took place in a checkpoint where Task Force Disiplina members blocked another delivery guy from passing through, telling him that “food is allowed to enter but people are not”.

Most people will say that it is only right to reprimand those who violate rules and regulations especially during these troubling times and we couldn’t agree more. But we should ask: “to what extent?”

Should non-wearing of masks in public correspond to inhumane treatment? To imprisonment? To further difficulties in the none-as-difficult situation we were forced during the pandemic and lockdown. No, no, no and no. What would be needed is neither public humiliation nor physical punishment, but the distribution of masks and food and financial aid, accessible health care, and compassionate public service.

Sure enough, some would say that a mask is cheap, a reusable one roughly costs 10php and below. Then, if it becomes an individual’s choice not out of circumstance due to economic incapacity or availability, what would be necessary is education – that we can lower and prevent the transmission of the disease by wearing a mask (and that COVID-19 is real, for those who deny its existence like a Youtube conspiracy theorist).

The hostile and persecuting climate of following health protocols during lockdown or quarantine is nothing new.

Since the beginning of Duterte’s rule, his dictatorial tendency was very imminent. First, he hunted down suspected drug users which victimized and terrorized thousands of poor communities while actual and self-confessed drug lords were on the loose.

Then, with a U.S. COIN (counterinsurgency) style creation of a terrorist bogey, he placed the entire Mindanao under Martial Law. Shortly after that sham “war against terrorism,” he cracked down dissent. Although these examples are primarily political in nature, it set a precedent that the government response on nearly everything will be ‘repression.’

This punitive approach was quickly adopted by almost every figure of authority from top to bottom. It was even amplified due to the pandemic. With their power to enforce curfew regulations and physical restrictions, they show force and intimidate people in their checkpoints and elsewhere. There are even cases where barangay watchment trespassed homes and forcibly drag “violators” out (i.e. for disobeying liquor ban).

Given these circumstances, people find it impossible to feel safe whenever they step out of their door, not only due to a possible contraction of the virus, but also the danger of running into some small-man-big-mouth government henchman, like those Bantay Bayan volunteers. Or police officers who fire at will, or with Duterte’s backing.

The repressive character of LGU’s during lockdown earned ire among constituents. People argue that these officials employ fascist measures while there is no concrete plan for mass testing, mass vaccination, and assistance for the poverty-stricken. They dispute that anyone can be arrested and tortured for simply not following their protocols but when it is them who needs help, the government is nowhere to be found.

But of course, we cannot solely blame them since they are just “following orders” which are not clear enough if not confusing, even among the IATF’s yes people. Underlings only echo what they hear from their masters and it does not matter whether their acts are sound or not because that’s how it’s supposed to be under a fascist rule. Little do they know that they are expendables in the eyes of their superiors; that they are just being used not only for dividing the people but to enforce repression. And when the time comes that they are found ineffective, they can be sacked without remorse.

Every tanod, barangay official, IATF volunteer, and every person participating in the COVID-19 response should realize that they are among the 99% who suffer and will suffer more due to the government’s neglect and mismanagement. Their mini-powers should not deceive them as they are minute and temporary. Instead of being a mere appendage to the rotten system, they should rethink their values and politics and join the people’s call for a better alternative.

Mass testing should be implemented in place of lockdown in order to isolate those who are COVID-positive because otherwise, it is pointless to have people stay at their homes without addressing the health concern. Government funds should be reappropriated to the health sector, not only to increase the compensation for its workers, but to employ more. Huge part of this should include the budget for the Build Build Build program which can be channeled into building hospitals and medical facilities because the lack of it is an already-existing problem.

Simply put, a health crisis requires not punishment-based but a health-centered response. The cure or prevention of the disease never depended on sanctions, torture, or abuse.