Home OPINION Duterte grants absolute pardon to US soldier as ‘parting gift’ to US... 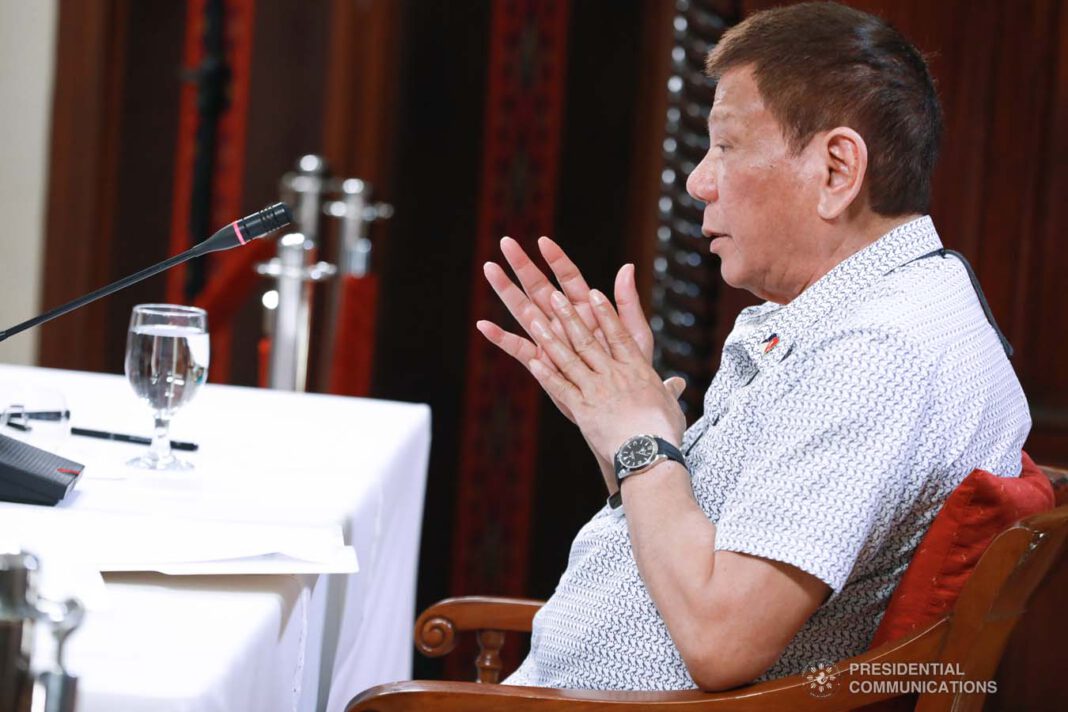 The announcement was first made by Department of Affairs Secretary Teddy Locsin Jr., around three hours after Duterte went on air and explained his decision. Unlike previous once-weekly speeches that centered on COVID-19 vaccine and corruption issues hounding his administration, Duterte’s speech mainly focused on this.

It even overshadowed his announcement that the curve has flattened—not that this would stick with people anyway, with 2,000+ or 3,000+ cases per day still, and 23% of total cases are active cases despite the tens of thousands of “mass recovery” implemented by the Department of Health in almost two months.

“The coronavirus curve flattened. Meaning to say that there are now less people with contaminated disease called COVID-19. Recent scientific studies have shown that COVID-19 curve in the Philippines has flattened. Walang mga — no significant contamination has been noted by government. This means that the government efforts that were guided by the best interest of public health and the crucial data provided by medical science paid off,” Duterte said.

Duterte had a lot to say about Pemberton:

So Pemberton is now poised to be released due to a presidential pardon he did not apply for, and previously due to GCTA despite the proper agency filing the reports for him to qualify for the law.

Despite no application, the pardon was exercised on the president’s prerogative.

The move was thought of by Duterte and announced on the same day as US Ambassador Sung Kim paid a farewell call on Duterte and Duterte conferred him with the Order of Sikatuna.

“The President simply felt that it was not Pemberton’s fault that there was no way of recording his behavior in a military detention center all alone by himself. So, since I stated that granting executive clemency was the President’s constitutional prerogative, 15 minutes into our meeting, the US Ambassador arrived for his farewell call on the President,” Department of Justice Menardo Guevarra said.

The absolute pardon is like a parting gift of the US Ambassador and a welcome gift to the new one—a gift of goodwill, rendering more special privileges to US than the current Visiting Forces Agreement (VFA) ‘equal protection,’ despite the VFA almost getting cancelled during Duterte’s term. But Duterte only has bravado to speak against the VFA when Senator Ronald ‘Bato’ Dela Rosa’s US visa cancellation due the former Philippine National Police chief’s part in the bloody ‘war on drugs.’ But just like one on a drunken stupor “who said things he did not mean”, the Duterte administration eventually took back the cancellation of the VFA—the first true act towards an independent foreign policy that he could have done four years into his term.

The President, last night, in justifying his unpardonable action had invented a story that Penberton was detained at “Marines garrison.” The camp of the Marines is located at Fort Bonifacio not in Camp Aguinaldo. Pemberton after his conviction had benefitted with the privilege on “equal protection clause” stipulated in the US-RP VFA. The Supreme Court in 2015 “allowed Pemberton to be kept in Camp Aguinaldo to honor the agreement under VFA,” when the Laude family petition the highest court questioning Pemberton’s detention at Camp Aguinaldo.

But last night, the family, relatives and friends of the late Jennifer Laude of Olongapo City, who was killed by Penberton and he was sentence with 10 years imprisonment, were shocked and saddened by the granting of absolute pardon of Penberton.

Duterte lied when he said that Pemberton’s detention has no record. The Olongapo court had given a perfect GCTA score (from whatever it based it on) and ordered Pemberton an immediate release, despite it not being the proper agency from which such evaluation should originate. But because of some irregularities in the procedure, many had spoken about questioning it and would cause the delay of Pemberton’s release. Duterte put all of US and Pemberton’s worries to rest with the absolute pardon.

Duterte lied when he said, “I am not favoring anybody — neither Pemberton, nor (the family of) Laude.” He is not telling the truth that by granting absolute pardon to Pemberton. He favored the US serviceman who violated the dignity of transgender woman six years ago. He favored the VFA that continue to trample upon the dignity and sovereignty of this nation.

Duterte will continue to lie barefaced and invent stories as long as he remains in power.

A day after Duterte’s speech, Defense Secretary Delfin Lorenzana said that he has signed a deal with China-backed Dito Telecommunity Corp., which would allow the telco to build cell sites inside Philippine military camps—another issue of sovereignty and security being contested by various groups and sectors in the country.

Pardoning Pemberton one day as the US ambassador exited and signing a huge deal with China-backed business the next is like “hedge betting” on these two foreign superpowers.

This is Duterte’s idea of an independent foreign policy again illustrated—harking back to the famous Vilma Santos line in the 1985 film Palimos ng Pag-ibig (Begging for Love): “Para kang karinderyang bukas sa lahat ng gustong kumain.” [You are like an eatery that is open to all who would like to eat.]

Granting absolute pardon to Pemberton diverted the attention of the public on the hottest issue which is the graft and corruption in the government. In the meeting, Duterte and Duque trifled about each other. Duterte talked of his continued trust in Duque and Duque talked of his gratitude to Duterte and his innocence in the alleged crime in front of Guevarra, head of the task force investigating corruption in Philhealth. Duterte gave his absolute trust to a public official included by the Senate Committee of the Whole to be filed with criminal charges in his position and involvement in questionable release of billions of funds under PhilHealth’s emergency cash advance measure.

The President recognized the efforts of the local government units, that they “played a vital role in the implementation of anti-virus or virus measures in their localities.” The public knew what is really happening on the ground. The hungry people because of 6 months lockdown cannot really feel the happiness of hearing a report that COVID-19 curve has “flattened.”

Other issue that was mentioned by Duterte which is not really new to the ears of the public is the corruption in in the implementation of infrastructure projects in relation to negotiations and bidding processes. The President as Mayor knew the standard operating procedure or SOP in a bidding system of government projects.

How long that we will be given information with a “controversial” issue that would cover up the most important issues? How long that the people be urged to listen a repetitive news and statements from the President who is known in inventing stories to please his listeners?

How long that we wait O Lord for your deliverance from the evil ways from unlawful servants?