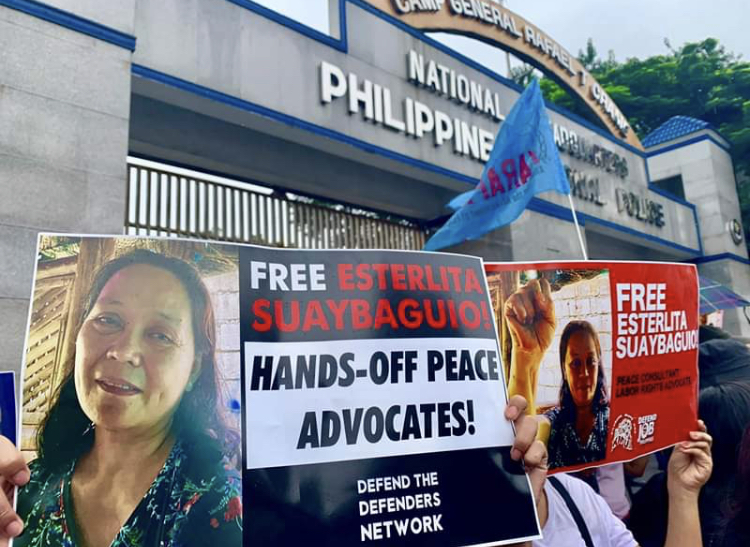 Oplan Kalasag is an Oplan Kapanatagan in National Capital Region. Oplan Kapanatagan is a joint operations of the Armed Forces of the Philippines (AFP) and Philippine National Police (PNP) as a counter-insurgency program of the Duterte regime. The task to maintain “peace and order” in the community is no longer the work of the PNP but with the support of the AFP. The AFP in supporting the PNP employs harassment, red-tagging, intimidation, coercion and offering of “livelihood program” of the leaders and members of progressive organizations.

The Defend the Defenders Network is an effort of the people in Metro Manila to gather, unite and promote the human rights of the people and in whatever means resist this “de facto martial law” scheme. With the implementation of Oplan Kalasag, peace and human rights advocates and progressive organizations like Kadamay, Gabriela, Anakbayan and other people’s organizations are target of suppression and repression by the Duterte regime.

The Iglesia Filipina Independiente (IFI) as a Church whose mission and ministry are to be in solidarity with the people who are poor, distressed and oppressed joined in the formation of the DDN. The leaders of Isaiah Ministry, an ecumenical group of church people and professionals in Metro Manila, which aims to promote a genuine and lasting peace and human rights of the people, took the initiative to be part of the DDN hoping that the presence of church people in the DDN would inspire the people’s organizations to stand firm and resist Oplan Kalasag.

On the same day, National Democratic Front of the Philippines (NDFP) peace consultant Esterlita Suaybaguio was arrested. She is the latest target to fall victim to Oplan Kalasag.

She is the 8th NDFP peace consultant to be arrested following the Duterte administration’s termination of the peace talks, after the arrests of Vic Ladlad, Adelberto Silva, Rey Casambre, Renante Gamara, Ferdinand Castillo, Frank Fernandez and Rafael Baylosis who were similarly charged with non-bailable cases. Baylosis was released after the judge who handled his case against illegal possession of firearms and grenade was dismissed because the police who arrested him could not establish beyond doubt that Baylosis was walking along a busy avenue with a gun and a grenade that hung on his pants conspicuously. NDFP staff Alex and Winona Birondo have also been arrested and detained.

Police reports quoted in media cited that she was arrested from a condominium in Quezon City at around 1:50am with a search warrant from Quezon City Regional Trial Court Branch 89 Executive Judge Cecilyn Burgos-Villavert, citing violations on Comprehensive Firearms and Ammunition Regulation Act and Unlawful Manufacture, Sales, Acquisition, Disposition, Importation or Possession of an Explosive or Incendiary Device. The report also cited that the suspect is facing cases of multiple murder, multiple frustrated murder, and murder of Patrolman Ronald Napalan, Jr. of the Regional Mobile Force Battalion Police Regional Office Caraga, as well as multiple attempted murder. The report also cited to have found with Suaybaguio a 9mm pistol, magazine with 7 bullets, a hand grenade and subversive documents.

According to the NDFP Negotiating Panel, “Suaybaguio is covered by the Joint Agreement on Safety and Immunity Guarantees (JASIG) with Document of Identification (DI) Number ND 978447 as second consultant for Mindanao.”

With Oplan Kalasag, the Duterte regime is trying to suppress the people’s dissent and assertion of their rights for life, human dignity and development. It must be noted that the same version on this counterinsurgency plan in Negros island called Oplan Sauron had already claimed almost 90 lives; most of them were farmers. There were also lawyers, human rights advocates and even a one-year old child who were killed. The rampage continues.

In some areas, the leaders are approached by the military and offered with “livelihood program.” One glaring scheme of the AFP-PNP operation is the using of the mothers of student activists to counter the activities of their sons and daughters and vilify their organizations.  The AFP-PNP are mobilizing government agencies, from city and provincial governments down to barangay officials for Oplan Kalasag, as it is the task of the “whole-of-nation aproach” strategy to “end communist armed conflict.”

Since the dictatorship of Ferdinand Marcos until now, the counterinsurgency plans of different regimes failed to stop the revolution of the people of Filipinos in the countryside and they failed to destroy the revolutionary organizations lead by the Communist Party of the Philippines (CPP). The regime that gave importance of the peace talks was the administration of Fidel Ramos. It was in his time that the agenda for peace talks (The Hague Agreement), the JASIG, Comprehensive Agreement of the Respect of Human Rights and International Humanitarian Law (CARHRIHL) and other supplemental agreements were drafted and signed, except for CARHRIHL that was signed by Ramos’ successor Joseph Estrada.

But the succeeding regimes disregarded the peace talks and used a militarist policy as dictated by the United States. The United States tagged the CPP and New People’s Army as “foreign terrorist organization” and the Duterte regime’s Executive Order 70 tagged progressive organizations as “communist fronts.”

The NDFP Negotiating Panel said, “The ‘anti-insurgency’ campaign of the Duterte regime continues to wreak havoc to the human rights of the Filipino people. Duterte’s Proclamation 374 designating the CPP-NPA as so-called terrorist organizations is also used to tag critics of the Duterte regime and social activists as ‘terrorists’ and justify the most brutal attacks against civilians and whole communities marked as bases of the revolutionary movement.”

It is in this context that the Oplan Kalasag is being implemented in Metro Manila and all over the Philippines, the implementation of Oplan Kapanatagan.

The illegal arrest and detention of Esterlita Suaybaguio is an indication that the Duterte regime would not heed to the people’s call to resume the peace talks.

The Iglesia Filipina Independiente, the Isaiah Ministry and the Defend the Defenders Network deplore Oplan Kalasag and strongly urge the Duterte regime to resume the peace talks now. The peace talks is a humane option to resolve armed conflict in the Philippines.

The IFI stand firm on its statement issued on January 23, 1987, “On the Search for a True and lasting Peace”. It states:

“We are committed to peace. On this matter, there can be no equivocation on our part. It is a commitment that is not born out of the practicalities of political adjustment, or of the vagaries of military strategy.

“It is a commitment that is rooted in our being as Christians and in our calling as Churches. Peace is what the ministry of Christ is all about. It is for peace that Christ came and gave His life of the world. It is at the heart of God’s own work in the world. “He shall… writes the prophet Isaiah, “judge between the nations, and shall not lift up sword against nations, neither shall they learn war anymore.” (Isaiah 2:4).

“We are inheritors of this work of peace. We believe in the vision it projects of a society and a world in which people need no longer to learn the ways of war.

“As such, we are ambassadors of peace; our task is to be peacemakers, and to help in building the foundations of a true and lasting peace.”

Esterlita Suaybaguio and other NDFP Peace Consultants and all political prisoners should be released and the government should resume the peace talks.