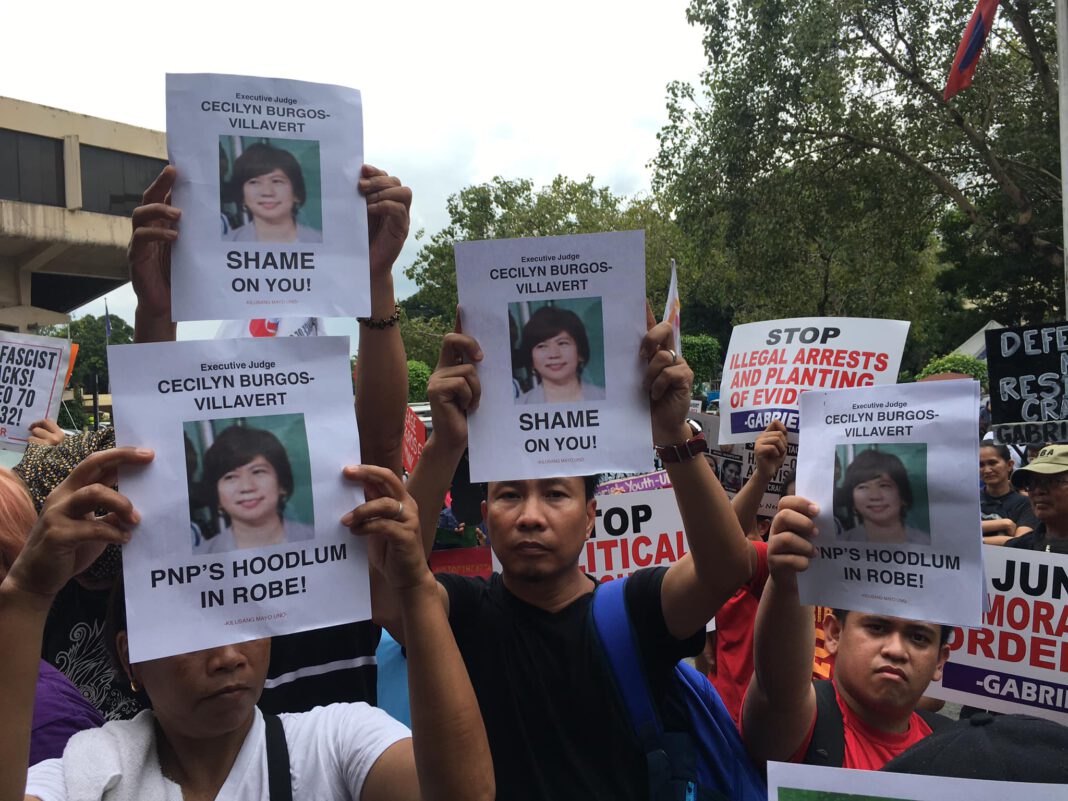 Cecilyn E. Burgos-Villavert is the Executive Judge in the Quezon City Regional Trial Court (RTC) Branch 89 who is notorious for issuing search warrants that led to string of raids operations among offices of progressive organizations and eventually arresting activists over alleged possession of firearms and explosives.

Human rights groups lambasted these arbitrary arrests citing that the evidences were indeed planted. Villavert’s “factory” of warrants, in fact, have been served not only in Manila but also in Negros.

Here’s a timeline of arrests of activists enabled by search warrants released by Villavert:

October 31, 2019 – Simultaneous raid operations took place in the offices and residential homes of progressive individuals. These were made, obviously, on the basis of search warrants issued by Judge Villavert which led to the arrest of 59 activists in Manila and Negros, respectively.

Gabriela Metro Manila spokesperson Cora Agovida and KADAMAY Metro Manila Education and Research officer Michael Bartolome were then brought to the Manila Police District after alleged .45 calibre pistol and two grenades were recovered from their residence of the couple.

In Negros, the Philippine Army’s 3rd Infantry Division (3ID) along Negros Occidental Police Provincial Office (NOPPO) and Criminal Investigation and Detection Group (CIDG) carried out raid operations in the offices of party-list group Bayan Muna, Kilusang Mayo Uno (KMU), and Gabriela in Barangay Bata, and two other offices of National Federation of Sugar Workers (NFSW) at Barangay Taculing and Barangay 33. All three organizations have long been red-tagged and labelled as “fronts” of the communist movement. High-powered firearms and explosives were also said to be recovered at the offices of the said groups.

No basis for investigation.

“She conducted the hearing to determine the existence of probable cause, conducted required searching questions – extensive questions and when she was satisfied with the existence of probable cause, she issued the search warrant. When the search warrant was served, she required the certain policemen or military men to report to the court within 10 days from receipt…and she followed. So, can we now take the initiative to investigate her? There is no basis. But if there will be a complaint and there is a basis of the complaint, rest assured that we will refer this to the court of administrator for investigation.”

It is true that the Administrative Circular No. 03-8-02-SC allows executive judges of the Manila and Quezon City Regional Trial Courts to issue search warrants that can be served outside their jurisdictions; however, it should follow certain procedures like on Chapter V, Section 12 of the circular:

Who endorsed the application of warrants?

January 11, 2019 – Sinas denied involvement on the series of the crackdown against progressive groups or any influence on the issuance of warrants. In a radio interview, Sinas said that the visit was a mere “courtesy call”.

On January 10, progressive groups and individuals protested in front of the Commission on Human Rights to call for the immediate release of the #HRDay7. One month after the arrest, the families, colleagues, and supporters of the six trade unionist and journalist Lady Ann Salem gathered together to launch the “Free HR Day 7 Network”.

The groups also called for the resignation of now PNP Chief Debold Sinas. PNP is in hot water after a series of controversy involving police violence, planting of evidence, filing of trumped-up charges, and merely spreading ambiguous narratives in relation to Christine Dacera case. The recent brutal police killings in Tarlac also ignited a ‘call for change’ from various groups. No less than 80 cops were dismissed since the start of Sinas’ leadership in PNP. Sinas was also known for his quarantine violation when he conducted a ‘“small mañanita”.