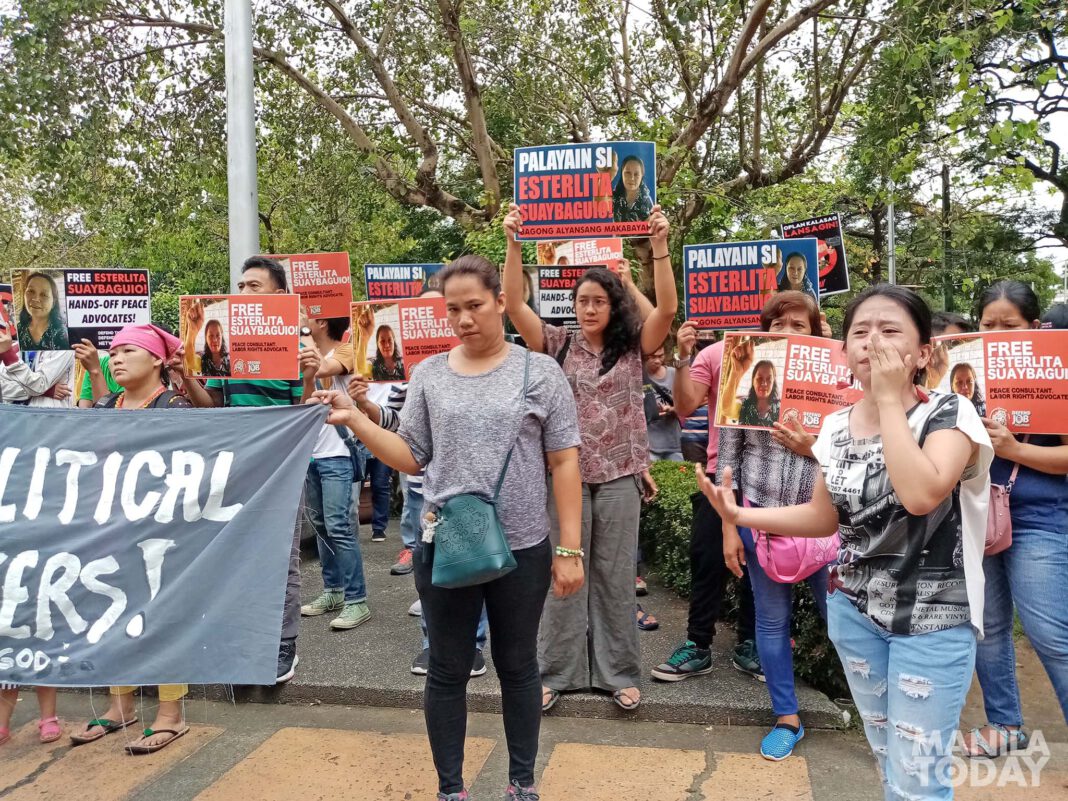 At the first hearing on the charges filed against peace consultant Esterlita Suaybaguio, rights alliance Defend the Defenders Network (DDN) held a picket protest in front of the Quezon City Hall of Justice to demand Suaybaguio’s immediate release.

Suaybaguio was arrested on August 26 in a condominium in Quezon City. She was charged for violating the Comprehensive Firearms and Ammunition Regulation Act and Unlawful Manufacture, Sales, Acquisition, Disposition, Importation or Possession of an Explosive or Incendiary Device for guns and explosive said to have been found where she lived, the police using a search warrant. DDN said evidence were “planted.”

She has turned 60 inside the Women’s Dorm of Camp Karingal that had very restrictive conditions, such as limited hours and days of visit and only for relatives, according to DDN. Suaybaguio, who suffer various health difficulties, also could not get her own food supplies inside detention.

[The Duterte regime is adept at trampling our human rights and those who defend human rights. It presents illegally-arrested activists, human rights workers, and peace advocates to the public as common criminals and enacts orders that restrict the political rights of the people such as Oplan Kalasag and the McCarthy-inspired Executive Order 70.]

Suaybaguio is covered by the the Joint Agreement on Safety and Immunity Guarantees (JASIG) as second consultant for Mindanao. The DDN emphasized that peace consultants under JASIG are supposedly guaranteed immunity from surveillance, harassment, search, arrest, detention, prosecution and interrogation thus Suaybaguio’s arrest is a clear violation on this.

[There is no truth on the charges they filed on Suaybaguio and was all part of government’s tradition on planting of evidences to those who fight for the genuine peace.]

Some of these charges, such as those against peace consultant Raffy Baylosis in 2018, were dismissed and Baylosis walked free after months in jail.