Home OPINION Through a hail of bullets and a storm of soldiers, a little... 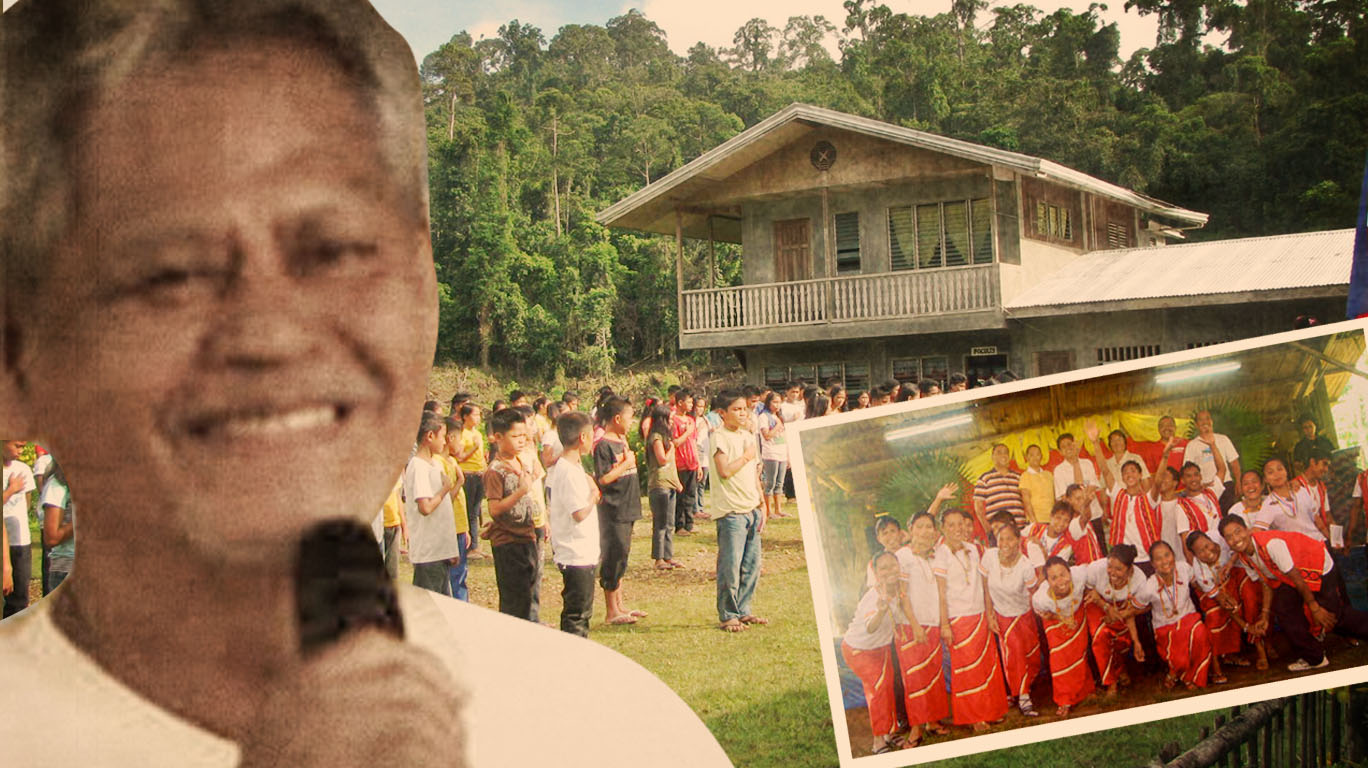 A diminutive school carved out of the wilderness of Lianga, Surigao del Sur. Such was the humble atmosphere of the Alternative Learning Center for Agricultural and Livelihood Development, or ALCADEV, a multi-awarded alternative learning system established for and by the indigenous Lumad people in the region of CARAGA in Mindanao. The school is known to be alternative due to its beginnings and management—Lumad people themselves and volunteers who endeavored to bring literacy to their far-flung areas that are barely reached by any government service or official. The school also classifies itself as an alternative to the basic education provided by government, for its goes beyond the rudimentary formal education to teach the Lumad to develop their agricultural livelihood, promote health and sanitation in their underserved areas, uphold their basic human rights and care for the environment—all that would enrich their culture.

But these days, ALCADEV is known for its dead.

Emerito Samarca, ALCADEV’s executive director endearingly known to many as ‘Tatay Emok’, was murdered last September 1, 2015 by elements of the Magahat-Bagani, a paramilitary group attached to the 36th Infantry Battalion of the Philippine Army.

The narrative from rights group Karapatan’s documentation of the murder is heartrending. Throat slit open, stomach stabbed, and face bruised almost beyond recognition, Samarca was last seen alive in the custody of armed Magahat and military personnel, his hands, feet, and neck all tied up.

Within the day, the rampaging soldiers and paramilitary goons had also killed Dionel Campos, chairperson of MAPASU, the partner indigenous people’s organization of ALCADEV, and and MAPASU member Datu Aurelio Sinzo, in a public execution in front of community members, in front of children.

Such was the bloody crescendo of the military’s heightened militarization in the municipality of Lianga. Children and community members relate to various national media outfits how armed men illegally occupied the function hall and school grounds of ALCADEV, threatened the community with massacre, and burned down the community cooperative store of MAPASU.

The military’s atrocities triggered the massive evacuation of the Lumad communities, a humanitarian crisis that has at present displaced more than 3,000 people who have evacuated to Tandag City, all in desperate need for food, water, and sufficient sanitation and shelter.

Mining as motive to mayhem

What did the Lumads ever do to spark the murderous ire of the Armed Forces of the Philippines and its equally murderous paramilitary groups? The clues are on the ground—and also below it.

ALCADEV, the Little Lumad School That Could, stands not only on fertile soil, but on highly mineralized land as well. The entire region of CARAGA, infamous as the mining capital of the Philippines, holds the largest nickel and gold deposits in the country upon which 23 different large-scale mines currently operate. The largest foreign and local ‘comprador’ miners in the country such as Philex, Anglo American, Nickel Asia, Sumitomo, Marcventures, BHP Billiton are leading this miner’s rush, some of them armed to the teeth with militias in their payroll.

The country’s largest coal reserve is also said to be found in CARAGA’s Andap Valley Complex in which the town of Lianga is situated. As of 2012, nine (9) coal operating contracts cover 58,000 hectares of lands in the region.

Aside from mines, greedy corporations have their eyes trained on monocrop plantations, with current areas and expansions of oil palm and banana plantations covering a massive 50,700 hectares.

The Lumad schools present a unique challenge to the entry of these big mines and other ‘development aggression’ projects. These widely acclaimed learning institutions are situated in the midst of these areas contested by different corporations.

But more than being a physical impediment to the entry of mining infrastructure, the cultural pride and social consciousness that ALCADEV’s brand of education brings to the countryside are empowering young Lumads in opposing big mining’s land grabbing and environmental destruction.

By building the capacity of young Lumads to sustainably utilize their lands for agriculture and alternative livelihood, they are in fact asserting their right to determine how their ancestral domain will be utilized.

For this, it is being met with a hail of bullets and a storm of soldiers from the military “investment defense forces” and their paramilitary augmentations—mining is the apparent motive to the military’s mayhem. Indeed, militarization is the bloody pill that the Aquino administration has always been prescribing to mining-related conflicts over its entire administration.

“Those in power deny us Lumads education because it would empower us to protect the environment,” said Michelle Campos, daughter of slain MAPASU chairman Dionel Campos.

Five years after Pres. Aquino came into power and 50 recorded cases of killings of environmentalists later, that prescription has clearly and miserably failed.

In a country where opponents to various forms ‘development aggression’ that are driving resource plunder and environmental destruction are considered enemies of the state, who defends the environmental defenders?

Only through the people’s resolute actions can we defend our own rights, and hold accountable the violators, in the same way the ALCADEV will stand strong if its students, teachers, and supporters will continue Tatay Emok’s legacy.

The unwavering struggles of ALCADEV’s students, staff, and supporters have been brought to Metro Manila, to the doorstep of Malacanang to raise awareness over their current plight. While in the rest of the country, thousands upon thousands of Filipinos in protest actions and people’s barricades, collectively struggle and successfully oppose mining plunder and destruction.

We owe it to Tatay Emok, Dionel, Aurelio, and many other fallen environmental defenders before them, to continue demanding for the pull-out of military investment defense forces and the disbandment of paramilitary groups. We must persist in our calls to immediately arrest and prosecute the murderers in the Magahat-Bagani and their superiors in the Philippine Army.

We must dedicate our lives, as the martyrs of Lianga did, to defending the people and environment from the relentless assault of plunderers and polluters.

The little Lumad school carved out of the wilderness in Lianga, Surigao del Sur still stands, despite its community cooperative and parts of a room that were burned down the day Tatay Emok was killed. But it is, for now, empty. It finds temporary dwelling in the evacuation center of the Lumad people, where the children’s education continues. Where it will continue to teach agriculture, health and sanitation, defense of human rights, care for the environment—all that would allow for the Lumad culture and life to persist.

Leon Dulce is the campaign coordinator of the Kalikasan People’s Network for the Environment, and the spokesperson of the Task Force – Justice for Environmental Defenders. 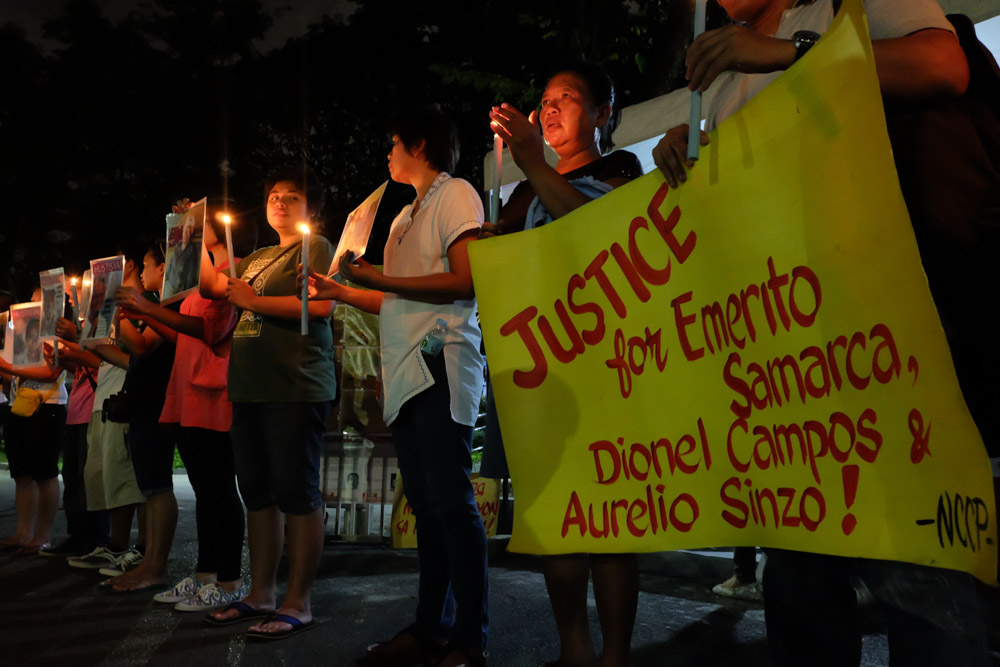