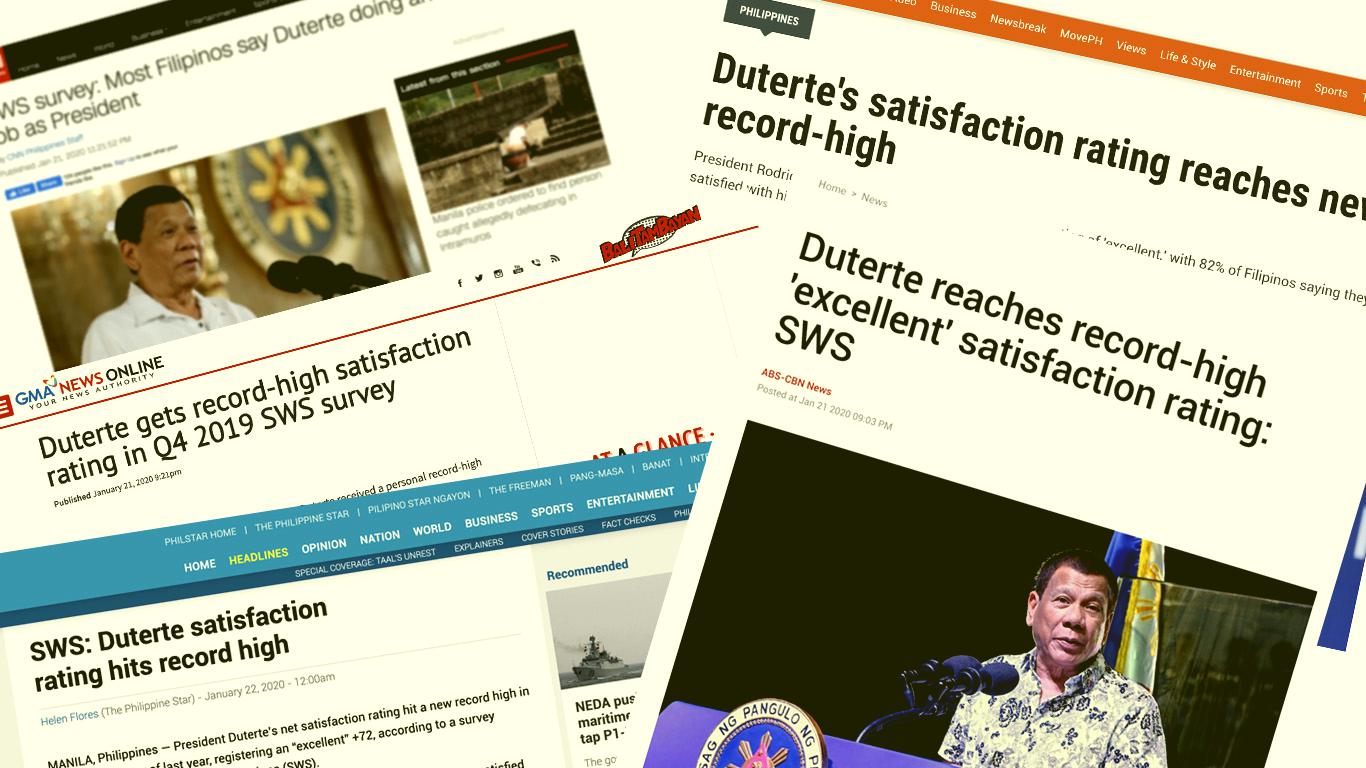 It is impossible to avoid some observation on the contradictions caused by the recent survey conducted by Social Weather Stations (SWS) which renders the current regime an overwhelmingly favorable disposition with widespread support and tolerance—“The  poll, taken from Dec. 13 to 16, 2019, showed 82 percent of adult Filipinos satisfied and 10 percent dissatisfied with the performance of Duterte.”—despite the irrefutable counter factual evidence that the general situation in the country is far from satisfactory. 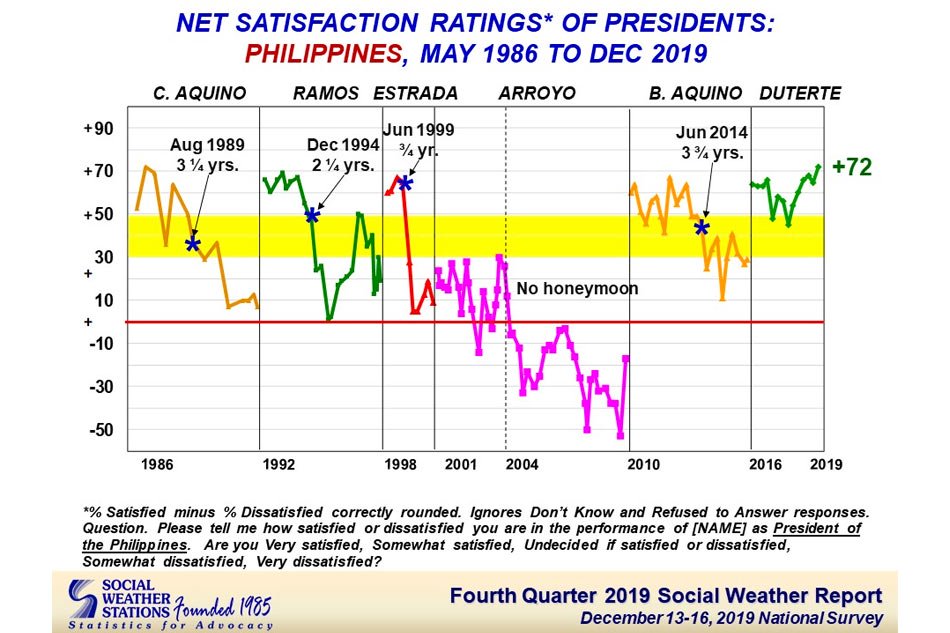 Despite “President Duterte’s net satisfaction rating hit a new record high” studies after studies, investigations after investigations, reports after reports of numerous internal disasters and unabated chaos have flourished under his wing. How do we reconcile the sanguine calculation of the SWS survey and the undeniably contradictory reality we live in?

While “His latest net satisfaction rating was seven points above the very good +65 registered in September 2019, and a new personal record that surpassed the previous record of ‘very good’ +68 in June 2019,” the same SWS conducted a survey on poverty which concludes that “at least 54 percent of Filipinos are considering themselves as poor.” “Most of the people who rated themselves poor are in the Visayas (67 percent), followed by Mindanao (64 percent), Balance Luzon (47 percent), and Metro Manila (41 percent).” The compliment “very good” seems to be out of place considering that the 54 percent “translates to 13.1 million families who self-rated themselves poor—a big jump from the 10.3 million in September 2019.”

Perhaps there is no contradiction. Perhaps we Filipinos are born with a natural predilection for poverty which moves us to thank our oppressors for it. Something of this nature renders this whole survey a complete mystery.

Transparency International reveals in its Corruption Perceptions Index (CPI) that “a staggering number of countries are showing little to no improvement in tackling corruption.” The Index suggests Philippine corruption at its worst in 2019. But that doesn’t deter the president from gaining a considerable amount of approvable from the populace.

A recent Oxford study discovered that the Duterte regime has been quite extravagant in financing “cyber troops” that champion in “verbal abuse, hate speech, discrimination, and/or trolling against values, beliefs or identity of a user or a group of users online.” The study reveals that around P10 million was spent in these specious online machinery which includes fake accounts that swarm “social media networks with spam and fake news—propaganda made to seem like legitimate news articles—and inflate the number of likes, shares and retweets.”

This is hardly surprising. No other government in the history of this country has been excessively enthusiastic in promulgating falsehoods, absurdities, exaggerations, offences, and abuses than this current one. Haven’t we been fooled and ridiculed enough by the unprecedented nastiness of the phenomenon called Mocha Uson and her army of trolls? And yet the satisfaction survey seemingly suggests that we thrust laurels at the feet of falsifiers, deceivers, and fabricators.

The recent calamity caused by the Taal volcano eruption exposed usual anomalies on the part of the government’s rescue and relief operation.

The research group IBON said that the “government’s preparation and response to disasters remained poor,” and made poor by the depraved Congress that depleted the calamity fund by 11 billion pesos in 2019, and, moreover:

“While the government is decreasing the calamity fund, it is increasing the 2020 budget for oppressive and self-serving expenses… For instance, around Php9.3 billion went to confidential and intelligence funds, which are widely suspected to be used in attacks against the poor and the administration’s perceived critics and opponents. These are funds better spent on the public interest.”

As a consequence of this outright and deliberate corruption the president, so far, deserves a laudable record high satisfaction rating.

A report conducted by Global Witness entitled Enemies of The State, How governments and businesses silence land and environmental defenders states that “The Philippines had the highest number of killings of any country this year (2018), with at least 30 defenders murdered.” Replacing Brazil “as the most murderous country in the world for people defending their land and environment.”

Add to that the countless deaths mined from the War on Drugs and other domestic policies that have very much the complexion of a genocide. The Philippines is becoming world famous for beauty pageant winners and dead farmers and activists.

It is difficult to fathom without feeling a mixture of weariness, wonder, and terror this so-called satisfaction survey which lifts the dear leader in such high regard. By what questionable standard can we judge a nation satisfied? Have our society reached the point of that Orwellian Dystopia in which War is Peace, Freedom is Slavery, and Ignorance is Strength? That despite our suffering and oppression we willingly congratulate the hand that crushes us. How can one explain this paradox?

Is it mere charisma of the dear leader which exercises with utmost force upon our minds? Or is it the Filipino inclination that is infatuated with a savior who will do the work of redemption for us? What political deception, economic drudgery, and cultural degradation it has cost us to arrive at our present mode of submission and resignation!

It somehow strikes one the notion whether Filipinos are still capable of making rational decisions and critical judgments. Doubtless that poverty and the daily drudgeries of life disable men to think coherently and critically, but I know an awful lot who are in a relatively privileged disposition and yet prone to willful blindness. I am not talking about the army of fanatics of the dear leader to whom human reason and argument are particularly distasteful and whose infatuation with bloodthirsty settlements mirrors the very authority they worship. I am referring to educated semi-middle class who despite the proven facts and studied evidences insists on, and even admires, the cold bloodied recourse of this office. Perhaps their secured ground and immunity inclines them to side on the powerful? Or just simply a case of willful blindness?

What this satisfaction survey show is one thing, what it means is another. The truthfulness of a survey doesn’t necessarily enlighten us of the condition of the surveyed. A survey can sometimes conceal itself in a specious appearance of optimism despite the reality expressing something quite the opposite. A rating of any sort, particularly on the measure of satisfaction, may exist without a proportional degree of wisdom. A survey is not futile but it is inadequate; it can only show so little of what is really out there.

Carlo Rey Lacsamana is a Filipino born and raised in Manila, Philippines. Since 2005, he has been living and working in the Tuscan town of Lucca, Italy. He regularly writes for journals in the Philippines writing on politics, culture, and art. He also writes for a local academic magazine in Tuscany which is published twice a year. Some of his articles have also been published in small magazines in the U.S. and UK. Visit his website at https://carloreylacsamana.wixsite.com/carloreylacsamana. or follow him on Instagram @carlo_rey_lacsamana