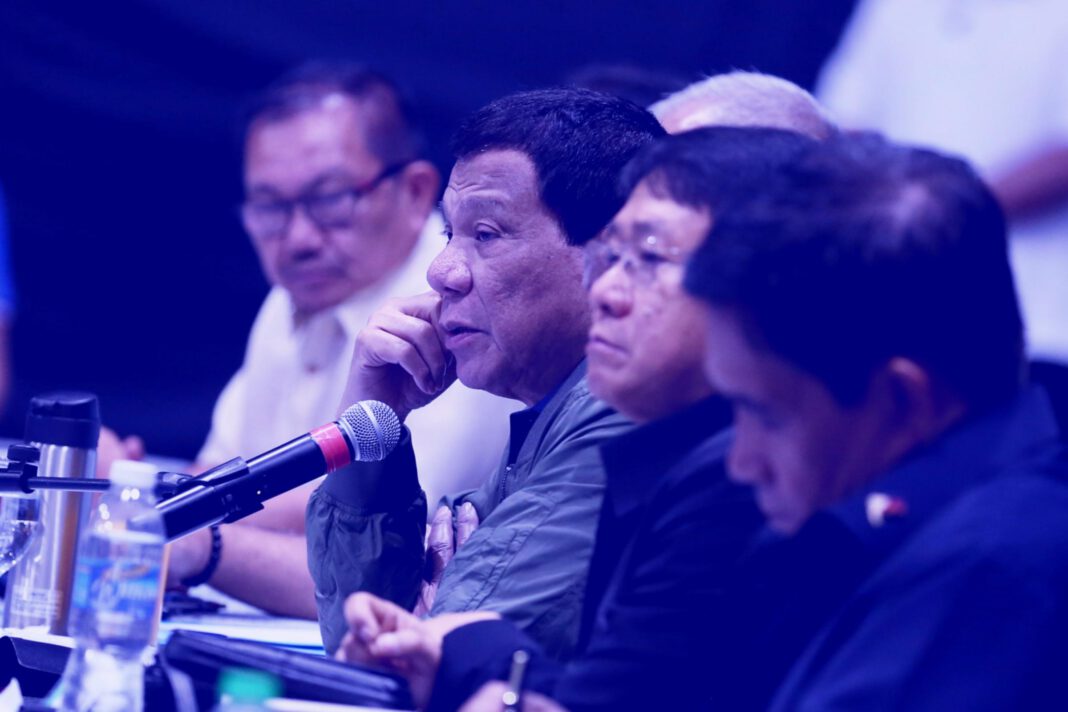 It is an order from the President Rodrigo Duterte not only for the “abusive” priests, but for all priests.

Duterte once again issued an order to kill the priests after the Roman Catholic Church (RC) had apologized for the “sexual misconduct” committed by a few members of its clergy, but not all clergy. The recent “sexual abuses” that challenged the RC Church gave Duterte the opportunity to continue attacking the Church and its clergy.

Duterte on March 14, 2019 in a “peace and order meeting” in the Joint Armed Forces of the Philippines-Philippine National Police (AFP-PNP) Command Conference at the Arcadia Active Lifestyle Center in Davao City, said:

(I don’t care if you all die, our cemeteries are still spacious. Sons of bitches, making me feel guilty about my – you started it.)

Before this pronouncement, Duterte insulted the priests as stupid and warned the women not to go near to them. This vilification among the clergy was first made by Duterte and now the command to shot the priests was uttered by the infamous and fascist President himself.

The death threats received by Caloocan Bishop Pablo David and other RC priests were sent through text messages. But Duterte himself is openly ordering to kill the priests. Surely, Duterte’s lapdogs will be busy to find excuses if someday one of these priests will be killed.

The death threats are not only received by the RC clergy, but also received by the clergy of the Iglesia Filipina Independiente or Aglipyan church and other churches. Missionaries of the Rural Missionaries in the Philippines are also persecuted, threatened and detained.

Duterte wants the people to live in fear. If he can threaten the clergy, how much more to the ordinary citizens.

Who are the priests in the Philippines?

It is good to understand the priest and his/her ministry, especially in the context of the Philippine society.

A priest is an ordained person, commissioned to be an intermediary between the people and God. His/her function is basically to represent the people or offer the people to God. The priest stands between God and man/woman. He is God’s representative and ambassador. Priests perform sacred rites, administer the sacraments, preach, make intercession, pronounce absolution, and safeguard sacred buildings and treasures of the Church.

The dignity of a priest is the highest on earth. His/her act of sanctifying the sacraments denotes the highest degree of sacredness. A priest is authorized to pray, bless and convert bread into the Body of Christ by the power of the word and action and can sanctioned to forgive sins.

The honor and respect to a priest or convey to the priest, it is also render to God Himself. To become a priest is a serious decision and a sacred duty to do or actualize it in his/her life. The life of a priest is a calling to serve God and people, especially those in need.

To become a priest entails a lot of sacrifices and dedication to God. Though, most of the priests in the Philippines enjoy a certain level of comfort, luxury and leisure, they are aware of the sufferings and hardships of the people, especially the poor and marginalized, they have served.

The Church canons, in general, enjoin priests to live a simple way of life and avoid living in worldliness. They have to experience living with the poor. They have to have immersion and solidarity among the poor people. Just like other vocations, priesthood is not an easy vocation. Many are called, but few are chosen.

The present context of the mission and ministry of the priests where many people are suffering and living in poverty and want should not be taken lightly. It must be seriously considered by the priests who took a vow of serving God and His people.

The priests’ calling is a challenge.

Priests cannot back out from their calling just because their lives are threatened or they received death threats. They are even prepared to accept sacrifices and death as Jesus had offered his life to redeem the world. They have to face the risks and attacks as part of their mission and ministry.

The order made by Duterte to shot the priests though condemnable and deplorable, must be accepted by the priests who are truly working and preaching the truth, justice and peace. But this does not mean that they will or should not take any measure and precaution. This is a struggle. It is actualizing the theology of the struggle. The Church is a sanctuary, but communities of people, especially in the countryside, are also good sanctuaries.

The calling of the priests in the Philippines is a great challenge. The Philippine is a backward and decadent society. The activists attribute these characteristics to the conditions in a semi-feudal and semi-colonial society. The activists had upheld an analysis that the worsening poverty and continuing suffering of the people in this kind of society are brought about by problems of imperialism, feudalism and bureaucrat capitalism. As a result of these three basic problems, the country is ruled by the comprador-landlord class, the 1% who hold 99% of the country’s wealth.

Christian activists also recognized that the Christian churches in the Philippines is a product of a colonial and feudal history and continue to serve mainly the exploiters and oppressors of this country.

This churches’ present condition is an opposite to the true Christian adherence to the tenet of loving the least of the brethren and accepting the challenge that the Christian faith gives, a challenge to liberation and love, unto death if necessary, so that others may live and live fully.

The need for democratic reform within the Churches is necessary and imperative. The church leaders, church people and Christians in general must think, accept and decide to help re-build the Church of the poor.

Thus, the challenge is not only living and exercising the priestly functions inside the church. The large number of Christians are living and working outside the Church. The priests must go out and participate in the struggle of the people to realize a better world of freedom, justice, progress and peace. By doing it, the Church will eventually be reformed or re-built by the power of the people with the sanctification of the Holy Spirit.

The mission and ministry of the priests and other church people shall support the struggle of the people, especially in raising the consciousness of the people, help them organize and support their mobilizations to advance their struggle.

In fulfilling the mission and ministry of Jesus Christ, priests shall help in giving flesh and blood to the Christian faith. The priests and other church people shall incarnate themselves in the deepest possible way to link to the life and death struggle of the people.

This path is not easy. This is, therefore, a call to sacrifice, up to the shedding of blood as many revolutionary and progressive church people martyrs have offered.

However, this challenge must be filled with realistic hope. The sacrifices and deaths, like those of the people who have laid down their lives, will not be in vain. Others will continue the struggle, in the same way that they carry forward the struggle begun by those before them.

The experience of church people in participating in the mass movement imbues the faith of the church people who carry on the struggle with fresh meaning. They believe that the people are rising up. It is the meaning of the resurrection at present.

Church people, especially the priests, and the people will achieve a common liberation and experience the liberating power of the Christian faith in the realization of the reign of God on earth as it is heaven.