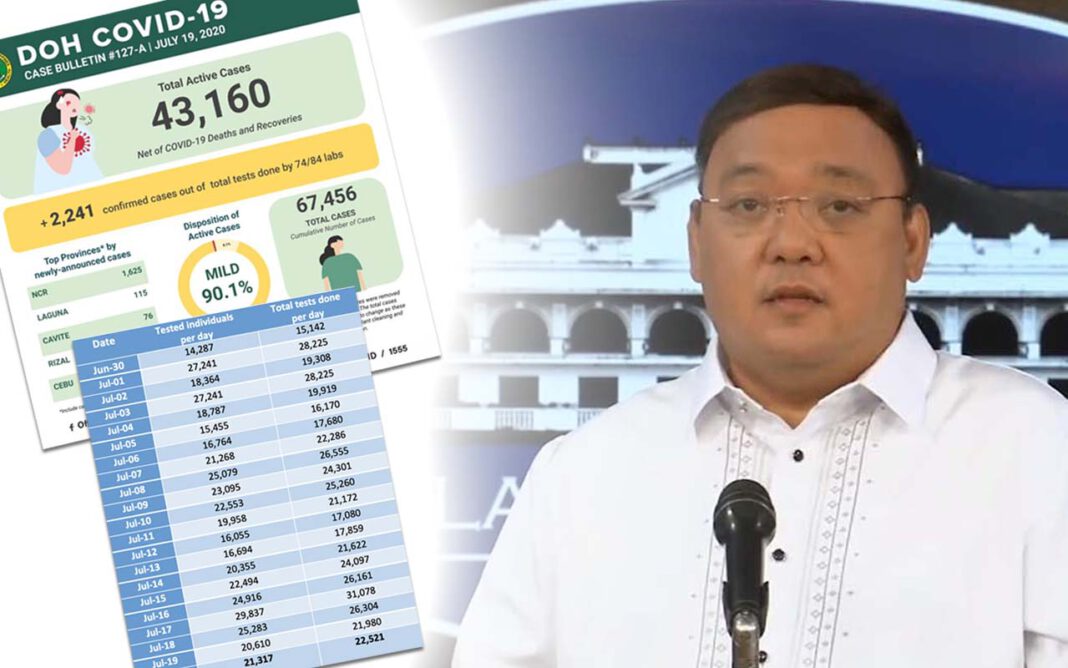 “We find it unfortunate that some quarters cannot seem to see the forest for the trees when they cite the cumulative number of cases and blatantly ignore the rest of the COVID-19 data,” said Presidential Spokesperson Harry Roque in a statement on July 19.

Roque, who returned to his post a month into the lockdown implemented in Metro Manila and the rest of Luzon, defended the government’s COVID-19 response despite the continued rise in cases.

“The community quarantine that the Administration imposed has helped us improve our health system capacity, and in turn, save thousands of lives at a huge cost to our economy. We earlier took the bitter pill of choosing health above economic activities,” said Roque, citing that the University of the Philippines (UP) earlier predicted three million cases if government did not act decisively.

As of July 19, there are 67,456 confirmed COVID-19 cases reported by the Department of Health (DOH), while there are 92,380 individuals who have already tested positive.

The DOH noted in its Situation Reports that the discrepancy between confirmed cases and positive individuals does not necessarily reflect backlogs in case validation—whereas before, the difference between the two has been considered validation backlogs of the agency.

Roque received flak for his ecstatic declaration of “beating” the UP prediction of 40,000 cases by end of June. The confirmed cases DOH reported then were 37,514, but those who have tested positive reached 46,355, a difference of 8,841.

The discrepancy between confirmed cases has also become bigger, now at 24,924 by July 19.

“While it is true that cases are still increasing, this is foremost attributed to our aggressive testing that we now have,” said Roque.

The government, however, is still way below its June target of 50,000 actual tests done per day, while DOH said that they have reached 50,000 tests but only as ‘rated capacity’ a week before June ended. The government fails to meet even its May 31 testing target of 30,000 per day.

In its reporting, the DOH decided to highlight active cases more than the total confirmed cases.

As of July 19, active cases are at 43,160, representing 64% of total cases and almost twice as many as the recovered cases.

Those who died from COVID-19 are at 1,831 by July 19. The reported number of deaths does not include suspected cases who died but were not tested.

National Task Force COVID-19 Chief Implementer Carlito Galvez, Jr. said on July 5 that there were 3,500 who died but were not tested, during a time that there were only 1,297 confirmed COVID-19 deaths.

295 COVID-19 cases among health workers reported in the last week brings total to 3,938