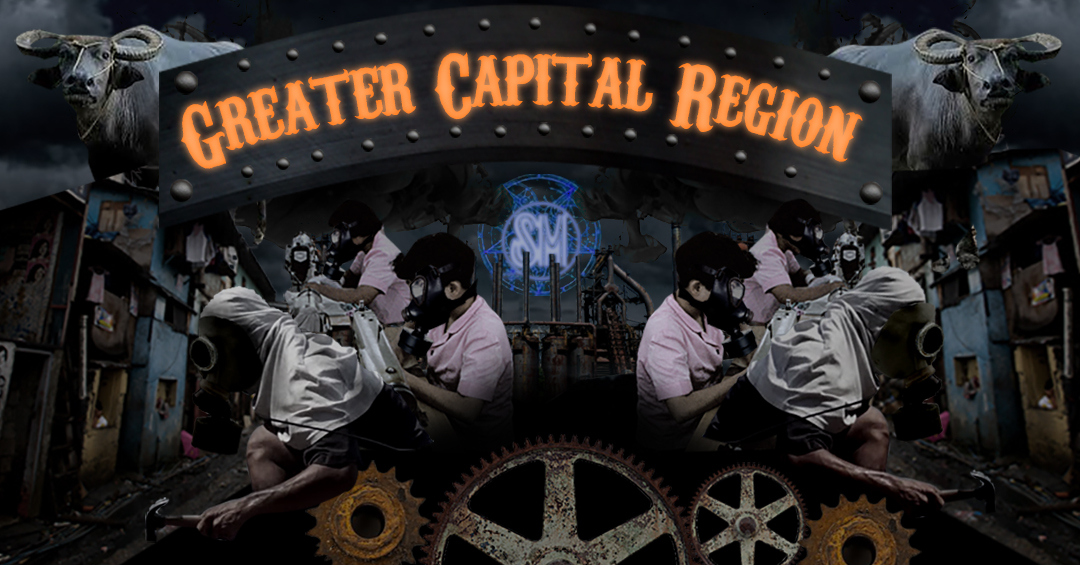 Is the ‘Greater Capital Region’ (GCR) the new National Capital Region (NCR) of the Philippines? This geopolitical category refers to Metro Manila, Southern Tagalog, and Central Luzon. Though it has yet to be officially acknowledged in the bureaucracy, some development planning institutions are already using the term GCR in their feasibility studies.

It reflects the spread of urbanization, the congestion in the NCR, and the continuing in-migration phenomenon. For economists, GCR represents the rapid growth of the local economy. Its share in the country’s GDP is enormous and it reportedly has promising investment potential.

What they fail to mention is that GCR, like NCR before it, embodies the fundamental weaknesses of Philippine political economy such as uneven geographical development, overconcentration of resources in the capital region, neglect of the countryside, backward rural economy caused by land monopoly, extraction of rural wealth by Manila-based dummy companies, unequal distribution of productive capital, and profit accumulation of oligarchs through rent-seeking and violent eviction of the rural poor from their lands.

It will not be long before GCR becomes part of popular discourse, especially when politicians and Local Government Units start to concoct various instant money-making schemes based on this new spatial division.

This is actually how the capital extended its frontiers in the past.

During the long Spanish era, the capital was restricted inside the walls of Intramuros. Then, Old Manila was expanded by absorbing the districts surrounding it. In the 1930s, a new capital city was envisioned which was named Quezon City. After World War II, Manila remained the country’s premier city but the capital region encompassed the suburbs and some towns of Rizal province.

The previously peripheral increasingly became near-center. Greater Manila Area was conceived in response to the changing socio-economic dynamics. Finally, the NCR as we know it incorporated Manila, Quezon City, and 15 other municipalities which later become cities except for Pateros.

In the past two decades, Metro Manila reigned as the official political capital region of the country; but when people talk about the urban economy, they use the term Mega Manila to include Cavite (the country’s most populous province), Laguna, Rizal, and Bulacan.

GCR is the expanded version of Mega Manila. But it is smaller compared to Gloria Arroyo’s Luzon Urban Beltway.

Identifying the political center is mainly an act of politics which means it is being done to pursue the economic interest of the ruling class. The rise of ‘Imperial Manila’ is a legacy of colonialism. That it continued to be the supreme city even after the country gained its independence in 1946 can be attributed to the neocolonial blueprint. The development masterplan didn’t espouse the unleashing of the productive potential of the countryside to spur genuine industrial development. Then and now, the designated role of the Philippines has been to produce raw materials and cheap labor for the benefit of transnational corporations and imperialist countries.

There has been no state-led economic planning program that pushed for the country’s comprehensive development. It must be emphasized that urbanization is not part of a government strategy but the consequence of haphazard development. Capitalists are always seeking to maximize profits which means they are ready to inhabit any place where cheap labor is available. Thus, the sudden transformation of small towns and rural villages into commercial and manufacturing hubs outside NCR. This process intensified when the anti-labor neoliberal doctrine became the most influential discourse in mainstream society.

It is not openly admitted but GCR was conceptualized to boost the opportunities for profit-making of big business in cahoots with corrupt bureaucrats. It seeks to legitimize the invasion of new spaces which requires government approval.

Invoking the ideology of supporting the business agenda ostensibly for the benefit of the greater good, the government has bulldozed its way into erstwhile peripheral areas. Land dispossession is called real estate development, environment plunder is reported as rural productivity, and assembly line sweatshops are hailed as export processing zones.

Progress is equated with corporate upsizing which explains why the initial plan for the GCR requires massive spending on high-impact infrastructure and transportation projects. Again, this is intended to serve the financial elite.

The framework is flawed because it assumes that chronic poverty in the countryside is mainly the result of infrastructure deficiency. Indeed, poor communities can ideally benefit from tollways and ports (unless they are targeted for demolition) but these vital infrastructures will be rendered meaningless if the roots of underdevelopment are not addressed. For instance, an expressway is necessary because it facilitates the faster transfer of goods from the rural to urban; but who will earn more from this type of investment: landlords or their tenants? Build highways and bigger ports to expand mining operations, but for whose benefit?

The so-called GCR is simply another mechanism to extract surplus value from the laboring classes. It is not a neutral description of a geographical space but a partisan mapping and re-territorialization program in favor of big business. It is bound to reproduce, if not worsen, the structural weaknesses of the present. There’s nothing to celebrate if it would only expand the urban poor enclaves and gated subdivisions of the NCR.

It is inevitable that the corporate version of GCR will trigger different degrees of defiance from the grassroots. For example, will farmers and indigenous peoples easily surrender their ancestral homes so that Manila-based executives can live in a green city? Will the fisherfolk accept the rezoning of their communities into a tourism hub? How long will workers endure the unscientific and arbitrary imposition of different minimum wage orders in the GCR?

It is true that colonialism was a brutal force that shaped the semi-feudal characteristics of Philippine society. But the tyranny of the system also generated resistance among the local population. There’s always an interplay between competing forces which often leads to political conflicts. Hegemony is never achieved.

Technocrats, bureaucrats, and their overpaid consultants can never successfully realize their ‘city of dreams’ (remember, too, the Marcosian ‘City of Man’) without the aid of state fascism. They have to contain community opposition, address labor demands, and respond to the clamor of residents. They cannot ignore that people are always moving, displaced families are settling in available open spaces, the destitute are disrupting the fantasyland of the luxurious, and various sectors are ready to fight over small and big grievances.

Unfortunately, they view the actions of the grassroots with suspicion. They fail to recognize how past acts of injustice, institutionalized inequality, and intergenerational poverty can provoke intense reactions among the people. They cannot empathize with democratic movements since they have been inured to reject any initiative that undermines the interest of capital.

But surprisingly, the idea of GCR also offers a rethinking of how people’s struggles across the three biggest regions in Luzon Island can be coordinated in a better and more effective way. Progressives should grasp the political sense of the GCR before politicians are able to coopt the notion for their selfish goals.

The economic aspect of real existing GCR necessitates a review of how some sectors are waging their campaigns. The fact that the biggest concentration of manufacturing workers is no longer in Metro Manila should lead to greater deployment of labor organizers in the Southern Tagalog.

How best to mobilize workers in the service sector? What are the appropriate types of organizing in suburban residential subdivisions? How to link urban community struggles across cities and provinces in a single regional grouping? How to coordinate territorial campaigns that cover the rural and urban? Where would people converge in the GCR to raise their political demands?

For NCR-based activists, the GCR is another reminder that workers’ organizing is no longer confined in 16 cities and a municipality. Due to the oppressive political and economic setups of processing zones, workers have spread and the urban has grown wider.

In many ways, the mass movement in the Philippines is already adjusting to the growing size of the urban in the country’s capital. The organizing among call center workers, the emergence of Lakbayan (caravan) as a frequent tactic to unite rural and urban struggles, and the protest of contractual workers in Laguna are some of the signs of the new normal in political organizing in the urban. Communication and networking logistics are partly provided by information technologies which are already ubiquitous today.

The mass movement also has built-in mechanisms to ensure the unification of people’s campaigns like the program enjoining the youth to live with the masses in peasant communities.

Even the Communist Party of the Philippine’s old regional division of Manila-Rizal was a prescient organizational structure that seemed to anticipate the formation of the NCR.

Once the GCR becomes an official category in the bureaucracy, the political struggle in the country’s capital will also undergo some rebranding.

Today in the NCR, the parliament of the streets represents the most visible form of protest against repressive institutions. But in the GCR, would the world finally take notice that the New People’s Army is waging war right in the heart of the capital?

Political struggles in the NCR are seen by many to be distinct from the conflicts in the remote regions of the country. But in the GCR, the armed revolution is no longer a ‘distant’ reality. The exploiting classes have to contend with the presence of rebels in the political center of the ruling order.

The GCR is an uncritical, celebratory concept of urbanization. It is a bourgeois innovation until it encounters the dynamics of the revolution in the interstices of the rural and urban.