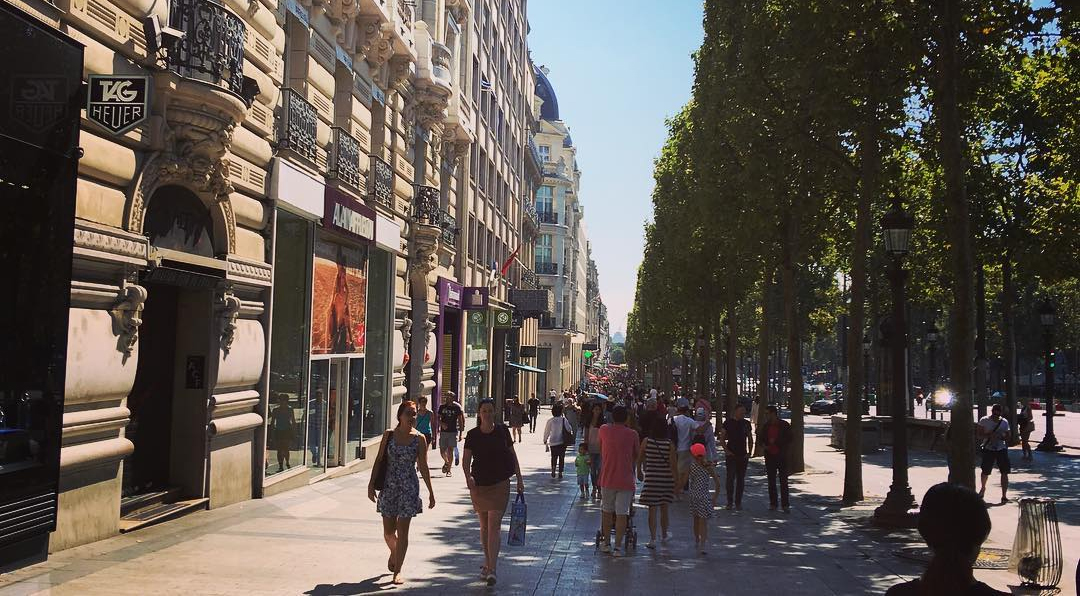 Champs-Elysees in Paris is among the famous streets in the world for upscale shopping. It is located in the 8th arrondissement of Paris from Place de la Concorde to the Place Charles de Gaulle (where the Arc de Triomphe is located). It is home to French world-renowned luxury brands such as Louis Vitton, Chanel and Hermes.

But what’s a more delightful sight on this very popular avenue? Two months have passed when a strike was held at one of the biggest shop here. Staying longer to observe the ongoing strike, a man was wearing a sign board containing their demands, it was of course written in French so a newcomer like me didn’t understand it immediately. A lady was giving away fliers so I got one and translate it using Google Translate online. I found out that they were fighting for just wages, better benefits and an end to the discrimination of employees in their corporation.

It was quite interesting and surprising to have witnessed the scene as there were no policemen on sight to arrest or intimidate the protesting workers. I can’t help but feel shocked about how these French people enthusiastically fight for their rights and how they seem to have more freedom to do so. What’s even more shocking is they do gain a lot of sympathizers even from people they don’t personally know. It dawned to me that fighting for human rights is just but normal to French culture. They don’t tag strikers as ‘bayaran’, ‘reklamador,’ ‘tamad’ or ‘panggulo lang’ but have a common understanding of how no one should be cowered in the face of injustice, no one should keep silent. People here take time to listen and interact. They take these actions seriously. One can see the manifestation daily, even in the metro or in the roads, how French people do struggle to live up to their national slogan Liberté, égalité, fraternité (liberty, equality, brotherhood).

A friend of my mother who works to help Overseas Filipino Workers (OFWs) in Paris get work permits said that working conditions in France is probably the best in the whole of Europe. She herself has gone to work as an undocumented OFW in many European countries in the past, but decided to stay in Paris for it being most generous to the workers. Even if she is not a fan of these protests and strikes, she does recognize and attribute the “best working conditions in Europe” in France to the workers’ militant struggle.

I recognized how far behind the working conditions it is in the Philippines, the reason I am here to work. Minimum wage is lower than half of the cost of living. Contractualization is prevalent, where workers were paid lower than minimum wage or required to work longer than nine hours or have no social benefits or retirement benefits. Many workers work in hazardous conditions, those that were only found out in the case of the fire in Kentex factory in Valenzuela that killed more than 70 and the fire in HTI Complex in an export processing zone in the Philippines where an independent fact-finding mission show that more than 1,300 workers are still missing after the fire.

The appreciation for workers standing up for their rights is also so far behind. In the Philippines, when you visit an ongoing picket, policemen or security guards also gathered maybe 5 to 10 meters away or trying to break up the picket, like the terrible acts of opening fire at unarmed farmers at Hacienda Luisita in 2004 and Kidapawan in 2016. Workers are always also intimidated to not fight for their own interests—even if it meant their own subsistence and survival—by saying that the economy would fall and businesses would close if the workers were given even a bit of a wage raise. Then after days or weeks of strike, you will read news about harassment happening or strikers being assaulted and for some instances it can go to a much worse news like a leader or member of the union being killed, like the long-drawn out picket of Nestle workers in Laguna where two successive union presidents were killed. These events happened even Supreme Court ruled in favor of the demands of the peasants and workers.

Curious as always, I checked the Facebook page of the strikers I have witnessed in Champs Elysees to get an update on how they are doing.  Based on their post last February 13, 2017, after 60 days of struggle of the Fnac employees in Champs Elysees they received good news since an agreement has been reached but according to them, there will still be a meeting with the management to address their other demands.

Compare that to the more than 400 striking workers of the Manila Cordage Company and Manco Synthetics in Calamba City, Laguna who after four months of launching their strike was reported attacked by at least 60 armed guards in their picketline. Their only demands were regularization on the job and wage increase.

Contractualization and very low wages remains to be a huge problem in our country. Last May elections, then presidentiable candidate Rodrigo Duterte vowed to put an end to contractualization. Now that he has assumed power and is in office for more than six months, we have yet to see him keep his promise.