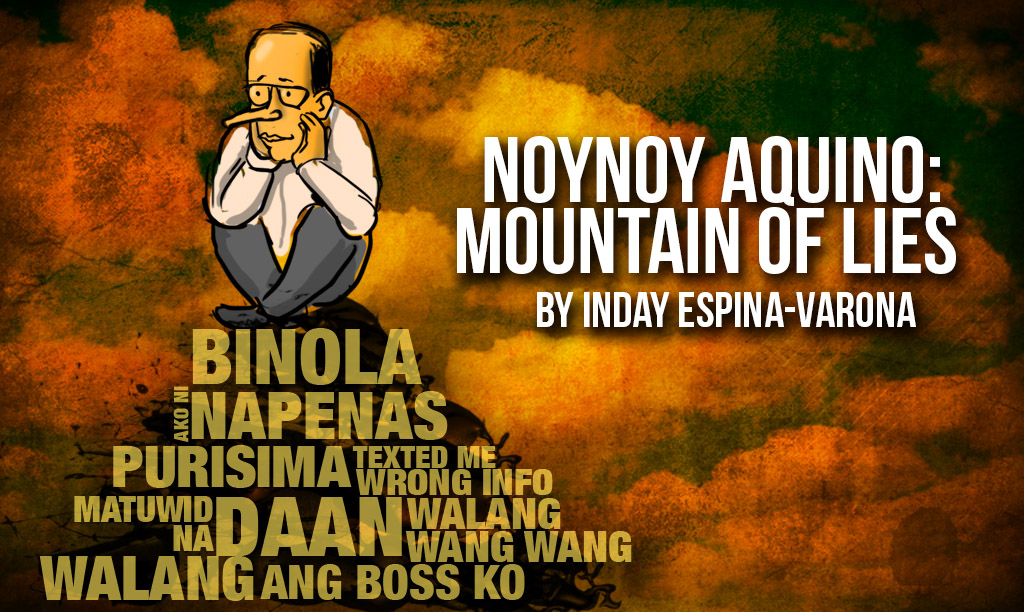 President Benigno Simeon Aquino III snubbed the invitation of the Board of Inquiry created by the Philippine National Police. Instead, he chose to deliver his latest outrageous speech under very controlled conditions.

“Christian leaders” gathered this afternoon on the grounds of Malacanang to pray for the President’s deliverance from his critics.

His speech came just a day after the nation commemorated the 40th day of the Mamasapano deaths. His speech came a day after widows of the SAF’s Fallen 44 begged him to tell the truth, and days after a surviving SAF hero of Mamasapano said the only justice he wants is to know who allowed his comrades to die. (Read: ‘No One Asked For Coordinates’ )

What did Mr. Aquino have to say this time? That Napenas tricked him.

(Napenas was indulging in wishful thinking, instead of focusing on reality. It is now clear to me: he tricked me. Napenas operated as a lone wolf. He decided alone and those decisions were wrong. When he left me on January 9… I now know that he had no intention of obeying my order for him to coordinate.)

Mr. Aquino today claimed, that as early as the January 9 briefing in Bahay Pangarap, he already told Napenas that the SAF cannot deploy just 160 SAF troopers in Mamasapano to take out Zulkifli bin Hir, alias Marwan, and Basit Usman when there were 3,000-4,000 potential hostiles in the area.

(He told me, we will coordinate on jump off. I told him, you can’t do that because you need to position artillery and tanks, personnel, gasoline, ammunition and bombs from planes.)

Aquino betrays his desperation with this new tack.

The Commander in Chief now presents himself as a fool, just to evade accountability for the tragedy that has torn the peace process into shreds and sent tens of thousands of Maguindanao residents escaping from clashes.

It’s exactly what the #TruthAndAccountability Network forecast in its statement last week.

“Various officials, from the Secretary of Justice to the Senate President, have tried to downplay the President’s role. Drilon has the gall to preempt the Senate’s investigative report, insisting no blame should be ascribed to the President.”

“Misguided, misled, misinformed. While he may have been all that, we warn lawmakers: Do not shield the President. Napenas answered only to Purisima and Mr. Aquino — because the President willed it.”

The lies are so bad they fly in the face of logic.

Today’s lies also show that he lied in his earlier speeches to the nation, when he claimed not to have dabbled into operational details about Mamasapano.

You wonder how his advisers – who must have monitored everything that has gone before – allowed him to mouth off in this fashion. Anyone can access news reports of the Senate Mamasapano hearings and related incidents.

But then accounts of the President’s willfulness are legion. Mr. Aquino has always had a problem dealing with reality – other than that which exists in his mind.

The fact is, the President is scared. Very scared. And he has a lot to be scared of, starting with the fact that the men he sacrificed in Mamasapano, and the men left holding the bag of blame, refuse to be silent.

The ship of state has so many leaks. Men in uniform themselves are punching holes in the President’s tall tales.

What the Senate did not bring to light was leaked last week: a video of Napenas, the morning after the Mamasapano clash, briefing Interior Secretary Mar Roxas and Defense Secretary Voltaire Gazmin and a roomful of officers.

Napenas, in response to Roxas’ questions, said the President knew that coordination would be time-on-target. Did Napenas lie? If he did, so did BFF Purisima, who repeatedly defended to senators his concept of time-on-target.

Not Napenas. Only Purisima. (The President barely acknowledged Roxas’ text on the morning of January 25. And he did not bother to talk to Roxas – who shared the same Zamboanga City-bound plane – until things got so bad around noon.)

If, indeed, Mr. Aquino warned Napenas of the need to marshall all possible personnel and equipment for Mamasapano, then he lied earlier in denying any operational responsibility.

But did Mr. Aquino really play the general in advising Napenas of what was needed in an operation where the SAF could face 3,000 to 4,000 enemies?

That is pure bull.

What commander in chief would ask a SAF director to initiate a powwow with the AFP chief of staff?

Had the Commander in Chief informed Napenas that thousands of enemies were waiting for the SAF, he would have at least checked with the AFP chief of staff and PNP OIC and DND secretary. (Never mind, Mar Roxas, whom he apparently blamed for Purisima’s woes.)

Killing his own legacy

If Mr. Aquino ordered the prepositioning of artillery and bombs from planes, why was there no rescue of the hapless SAF? As a SAF survivor notes, they provided coordinates regularly. Every time they moved. They could have given the coordinates of the enemy had these been requested. There was no rescue until very late in the afternoon. (Read: ‘No One Asked For Coordinates)

If the President was willing to pour fire and brimstone on the enemy, he would have told his AFP officers to bomb away. Those poor men, blamed for the deaths of the SAF, had the peace process in mind as they scotched tactics that would have scorched Mamasapano communities.

(That is said with sorrow, because I truly believe the Bangsamoro deserve the right to self-determination. )

All of Mr. Aquino’s lies are attempts to coverup the main question of accountability.

He has failed to answer this: Why did you insist on appointing a disgraced police chief to head such a sensitive operation (thousands of enemies!) with the potential to wreak death and destruction?

Purisima’s role was not limited to advise. He directed Napenas. He reported directly to Aquino during planning and as the bitter truth unfolded.

You lied, Mr. President. You deliberately created a shadow chain of command.

Spare us the old claim of having noble intentions. Even a global terrorist like Marwan is no excuse for whole-scale upending of systems aimed at defending our fragile democracy.

Shadow chains of command are the domains of tyrants and rogues. Especially when these are headed by people accused of serious crimes.