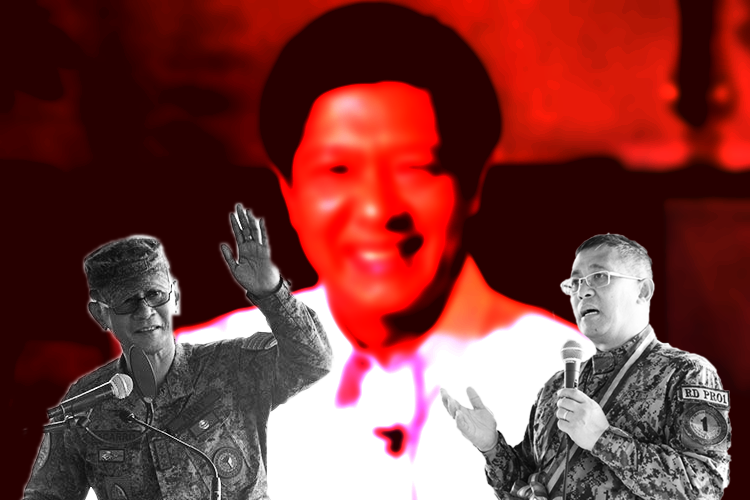 The Marcos Jr. administration has no plan to resume the legitimate peace talks between his government (GRP) and the National Democratic Front of the Philippines (NDFP). As a matter of fact, he will continue the program to “solve” the armed conflict through “localized peace talks” as implemented by the National Task Force to End Local Communist Armed Conflict (NTF-ELCAC) initiated by his predecessor Rodrigo Duterte. The weapon for this program is the Anti-Terrorism Act of 2020 and other repressive laws, rules and regulations.

This policy of no peace talks actually would not cater unity among the Filipino people. Armed conflict is not an issue of insurgency but an issue related to genuine land reforms, industrialization amid the country’s continuing cycle of having an import-dependent and export-oriented economy, liberalization, privatization and deregulation, contractualization of labour and destruction of environments by foreign mining corporations, among others.

The chief implementors of NTF-ELCAC in somewhat Marcos style are Gen. Rodolfo Azurin Jr. and Gen. Bartolome Vicente O. Bacarro as chief of the Philippine National Police (PNP) and Armed Forces of the Philippines (AFP), respectively

It must be noted that both are not new to their tasks. In fact, during the Duterte regime and even before Duterte, they were engaged in combat operations against the revolutionary organizations led by the Communist Party of the Philippines (CPP).

Who is Rodolfo Azurin Jr?

Azurin, a graduate of the Philippine Military Academy (Makatao Class of 1989), was a former provincial director of Benguet Province, regional director of the Police Regional Office in Ilocos, and the commander of the Northern Luzon Police Area composed of the regions of Ilocos, Cagayan Valley, Central Luzon, and the Cordillera Administrative Region. He was involved in the planning and implementation of the counterrevolutionary activities mainly in Northern Luzon.

As a former director of the PNP Directorate for Comptrollership which assists the Chief PNP in the administration and management of financial resources, Azurin knew then how to maximize the budget of the NTF-ELCAC.

As the director of the Directorate for Information and Communication Technology Management, Azurin set policy agenda on Information and Communication Technology (ICT) Management and Development; while formulating, reviewing and supervising the implementation of programs and projects in consonance with the PNP ICT Master Plan, the Information Systems Strategic Plan (ISSP), and existing ICT policies which are important in “counter-insurgency” of the PNP.

As a director of the Maritime Group he had also served, he performed all police functions and ensure public safety and internal security over Philippine territorial waters and rivers including ports of entry and exit; and sustain the protection of the maritime environment; of course, the “counter-insurgency” was included.

Azurin also served as the Chief Task Force Limbas of the Highway Patrol Group which is responsible in the apprehension of alleged criminals whom they tagged as members of robbery-holdup, carnapping, gunrunning and gun-for-hire. Such “crimes” are in the same manner as trumped-up charges against activists of firearms and explosives possession.

Azurin also served as deputy organizations officer of the Presidential Anti-Organized Crime Task Force created in 1988 through Executive Order No. 8 issued by President Joseph Estrada. Under this post, they were tasked to investigate and prosecute all criminal syndicates and their protectors. Meanwhile, it is imperative for the task force to carry out substantive results with regard to their campaign against criminality and corrupt practices but even put up to consider revolutionaries as “criminals.”

By any all means, Gen. Azurin is but a relentless lapdog that will continue the prevailing culture of violence, red-tagging, and impunity with the implementation of anti-insurgency campaigns. He will use a “Marcos style” tactic to divide and rule. In fact, what he wants is a collaboration between the Church and his quad concept in addressing the illegal drug problem under his Malasakit+Kaayusan+Kapayapaan=Kaunlaran (Compassion+Order+Peace=Progress) mandate.

The role of the Church under Azurin’s new mandate is its participation in the “Kasimbayanan (Kapulisan, Simbahan, at Pamayanan) program which sought for religious leaders to conduct counselling treatment among police forces to boost morale improvement and credibility.

[If we talk about Metro Manila, let’s admit that police here have poor credibility. If a police officer or personnel says he or she wants to change, no one will believe that, right?]

Azurin even assured the public that the PNP will continue NTF-ELCAC programs with “more vigour and enthusiasm.” And this would probably mean a more vigorous red-tagging, false accusations, illegal arrests and detentions, trumped-up charges, and even more extra-judicial killings.

Who is Bartolome Vicente Bacarro?

As a Medal of Valor awardee over such “conspicuous acts of courage, gallantry, and intrepidity at the risk of his life above and beyond the call of duty” in a 10-hour so-called encounter with “a 150 fully-armed red army troops who attacked the town of Maconacon, Isabela on Feb. 26, 1991”, Bacarro will continue a widespread of lies and fearmongering antics alongside the outnumbered killings and arrests of activists which will, later on, be tagged as members of the NPA.

Bacarro, who served the 5th Infantry Battalion of the Philippine Army as “platoon leader, company commander, administrative officer, intelligence officer, operations officer, civil-military operations office,” he surely will oppose any call of the people to resume the GRP-NDFP peace talks. Like what he did at the height of the “counterinsurgency” campaign in the Isabela region from June 1988 to 1995 where many human rights violations have been committed.

As the Philippine Military Academy (Maringal Class of 1988), with a privilege to serve the AFP until 2025 (even if he reaches the mandatory retirement age of 56 this year) under the fixed term of three years as mandated by Republic Act No. 11709, Gen. Bacarro will further implement a three-year program of “counter-insurgency” which definitely means a premonition to a spate of human rights violations, extra-judicial killings, and or enforced disappearances.

That his experiences as spokespersons of the Philippine Army and Camp Aguinaldo, Gen, Bacarro will not hesitate to sow intrigue among the revolutionary forces and issue “fake news” to win over the masses of the people in the name of a bogus, fake, and illegitimate “peace” for the country.

In 2014, Bacarro was designated to be the chief of the 4th Infantry (Diamond) Division which has jurisdiction in provinces like Misamis Oreintal, Bukidnon, Agusans and Surigaos. As a chief, his troops have instilled fear among peasant and Lumad communities through militarization, landgrabbing and conversion that these minorities are forced to evacuate from their ancestral lands, farming communities and self-administered schools.

Being the successor of Lieutenant General Antonio Parlade of the AFP Southern Luzon Command (Solcom), Gen. Bacarro was responsible for the continuing red-tagging of personalities and progressive leaders of the people’s organizations Parlade was notorious in doing so.

Both Azurin and Bacarro as implementors of NTF-ELCAC will just follow and obey their commander-in-chief Marcos Jr. in the propagation of historical distortion and denialism against vocal critics, the oppositions and progressive partylists and organizations.