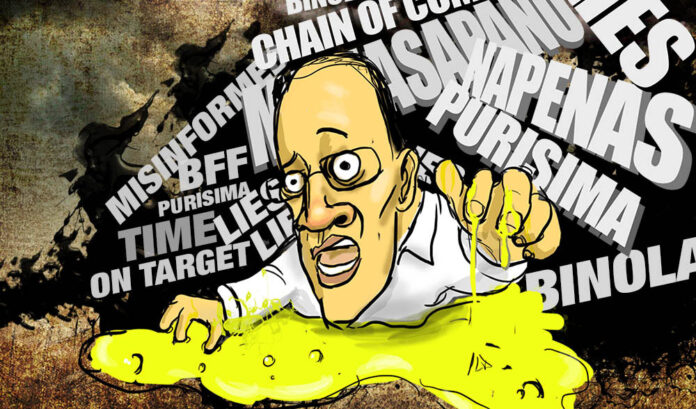 For probably the first time in the teflon presidency of Benigno Simeon Aquino III, the bosses are cracking the whip, telling the self-righteous little emperor that he truly has no clothes.

And it’s a sordid sight.

Who could have imagined this proud son of icons being hoisted by his yellow ribbon, now splattered with the blood of those who fell in Mamasapano, Maguindanao on January 25.

Pulse Asia has released results of an approval and trust survey conducted from March 1 to 7. Results show the President’s approval rating dropping from 59% in November 2014 to only 38% in March 2015, a drop of 21 percentage points — the lowest for Mr. Aquino since he assumed power in 2010.

The report comes just days after Mr. Aquino claimed more Filipinos believe the country is worth dying in his speech at the Philippine Military Academy (PMA) graduation rites.

The survey was taken before Mr. Aquino’s surreal, mad-hatter performance before a tame, handpicked audience from a religious sect.

Since then, the Philippine National Police Board of Inquiry report into the Mamasapano carnage has come out.

Just today, Sen. Grace Poe released a damning report on a probe convened by the Senate commitees on Public Order and Dangerous Drugs, Peace, Unification and Reconciliation, and Finance.

The report states that the President knowingly allowed a suspended police chief to continue exercising official functions. It refutes government claims that Americans had no direct involvement in the Mamasapano operation.

The Poe report goes beyond the BOI acknowledgement of the presence of six Americans in Napenas’ command post. It bares details from executive proceedings, including an exchange that had an American ordering the head of the reinforcing military division to rain artillery fire on hostile forces.

Worse, it strongly hints that Mr. Aquino’s over reliance on Purisima even as the Mamasapano tragedy unfolded, may have hampered the search for a solution to save cornered the cornered SAF.

While Filipinos, especially those serving in military and the police, may believe the country is worth dying for, they may be wondering if Mr. Aquino is a commander in chief worth fighting for. The reference to the line made famous by his murdered father, Ninoy Aquino, was unfortunate — uttered by a man who has refused to accept any blame for the deaths of 44 elite. US-trained cops in Mamasapano.

The problem is, Mr. Aquino conflates “country” with himself. That autocratic streak and sense of entitlement that upends everything “People Power” stands for, are at the root of his current woes.

The President campaigned in the 2010 elections, pledging to be the opposite of his predecessor and waving the banner of “tuwid na daan” (straight path).

Mr. Aquino has led the charge against corrupt allies of former president Gloria Macapagal-Arroyo, who is under hospital arrest as she awaits the outcome of plunder raps. Yet the incumbent Chief Executive and Commander in Chief has shown a persistent refusal to hold friends to the same standards of integrity he demands of the nation.

The BOI pointed out that Mr. Aquino, as Commander in Chief, bypassed the PNP chain of command by entrusting the suspended Purisima with the Mamasapano operation.

The report, of course, also found Purisima and Special Action Forces Director Getulio Napenas guilty of the same. Purisima also usurped authority that was not his to wield.

The BOI rejected de Lima’s claim that the PNP, a civilian organization, does not have a commander in chief and that the break stopped with Purisima and Napenas.

The Justice Secretary reiterated her position following the release of the BOI report. Mr. Aquino’s spokespersons echoed that line. Even the Interior Secretary, who supervises the PNP and publicly mourned for the 44 fallen SAF, said Mr. Aquino holds no blame for the debacle.

The PNP probers have refused to blink and are standing by their report.

The BOI head, CIDG Director Benjamin Magalong said they ignored Mr. Aquino’s speech before his religious friends. This was where he gave a convoluted narrative of his supposed effort to warn Napenas against potential disaster.

The BOI report actually highlighted the President’s conflicting statements as the Mamasapano probe underwent various twists and turns. The Palace’s no-commander-in-chief defense has also been squashed by former president Fidel V. Ramos and former PNP chief and senator, Panfilo Lacson. The latter pointed out that the Constitution clearly states that the President of the Republic is Commander in Chief of its armed forces, to include the PNP.

Commander in Chief at his own whim

Mr. Aquino himself caused the greatest damage to the official Malacanang spin. In at least two speeches, he referred to himself as Commander in Chief of the police. The first was during the2014 graduation rites of the Philippine National Police Academy, where he vowed to come down heavy on corrupt, abusive cops.

The second, more recent one, was his televised address to the nation last February 6.

The President’s speech was all about Mamasapano, which was purely a SAF (police) operation since Purisima and Napena failed to coordinate with the military – or only did so with a curious interpretation of “time-on-target” as to mean after the fact.

This was the speech where he reluctantly, even angrily, accepted the resignation of Purisima as PNP chief, lauding the latter’s history of personal loyalty, including restoring his confidence — via an improved VIP protection program — after an ambush that led to the deaths of three of his aides during the 1987 coup attempt

Mr. Aquino was forced to accept Purisima’s resignation after Napenas exposed Purisima’s order to withhold information from PNP Officer in Charge Leonardo Espina and Interior Secretary Mar Roxas. The President had earlier claimed  that Purisima had merely offered advice on the nuances and intricate points of the admittedly high-value operation.

Even as Mr. Aquino’s aids struggled to undo the damage done by the BOI report,  Poe released her draft report on the chamber’s Mamasapano probe.

“The President must bear responsibility for giving assent to and failing to prevent the unlawful exercise of official functions by PDG Purisima in connection with Oplan Exodus. “

The report cited  a text exchange between Purisima and Mr. Aquino a day before the Jan 9 meeting with Napenas and PNP Intelligence Group Director Fernando Mendez. It shows Purisima arranging for the briefing on Oplan Exodus.

The suspended cop chief then escorted the two police officers to the Jan. 9 meeting, made them wait after the briefing while he had a private chat with Mr. Aquino, and then ordered Napenas to keep the operation from Espina and IRoxas.

“… even before 8 January 2015, Purisima was already “barred from performing the functions” of the Office of the Chief of the PNP. Yet, he personally took charge over the presentation of the updated plan to get Marwan and Usman before the President and accordingly made himself present when Napeñas gave the briefing and mission update on Oplan Exodus to the President at the 9 January 2015 meeting held at the Bahay Pangarap in Malacañang. Being on preventive suspension, Purisima should not have been at this meeting, where a highly classified police operation was being discussed. The President should have excluded Purisima from this meeting. “

Much speculation swirls around the President’s trip to Zamboanga on the day of the tragedy. His cops were dying as he did the rounds of hospitals to convey sympathies for victims of a bomb blast. Reporters waited for hours for a mysterious briefing that never happened. And then he went back to Manila the same night, without any acknowledgement of Mamasapano.

Both the BOI and the Poe reports note that Mr. Aquino — known as a lover of all things that go bang — was involved in tactical details and giving orders like a commander. The Senate report notes that he “gave instructions to PDG Purisima as to the conduct of Oplan Exodus on 25 January 2015, as when the President sent PDG Purisima a text message reading, “Basit should not get away.”

The families of the slain SAF and the surviving members of the assault Seaborne unit have stressed that in their search for justice, they want answers on why no rescue happened till it was too late.

While the Poe report raises the possibility that the military could have done more, it lays the blame squarely on Mr. Aquino.

All of the President’s officers in Zamboanga say he did not consult them. Neither did these officials assert themselves. The report posits that had information been shared during those crucial hours, rescue could have been hastened and lives saved.

As the Commander-in-Chief of all armed forces of the Philippines, the President exercises supreme operational command of the nation’s military forces. The President also controls all the executive departments, bureaus, and offices. He wields the awesome powers of government, and has its vast resources at his disposal. The President’s decision not to use these resources at that instance, must be explained by him. The President is ultimately responsible for the outcome of the mission.

Command responsibility. The coddling of a friend facing grave charges of corruption. The wilful refusal to consult other security officials even during a crisis. The green lighting of an operation where the Americans played such a key role that they dared order military rescuers.

As the nation grieved for the fallen cops, the fallen rebels, the slain civilians, Mr. Aquino and his aides tried their best to keep the lid on these ugly truths.

The pus has bubbled over, spreading an ugly yellow stain on hopes for peace in Mindanao. The avalanche of poison from festering wounds threaten to swamp Mr. Aquino. And he has only himself to blame.