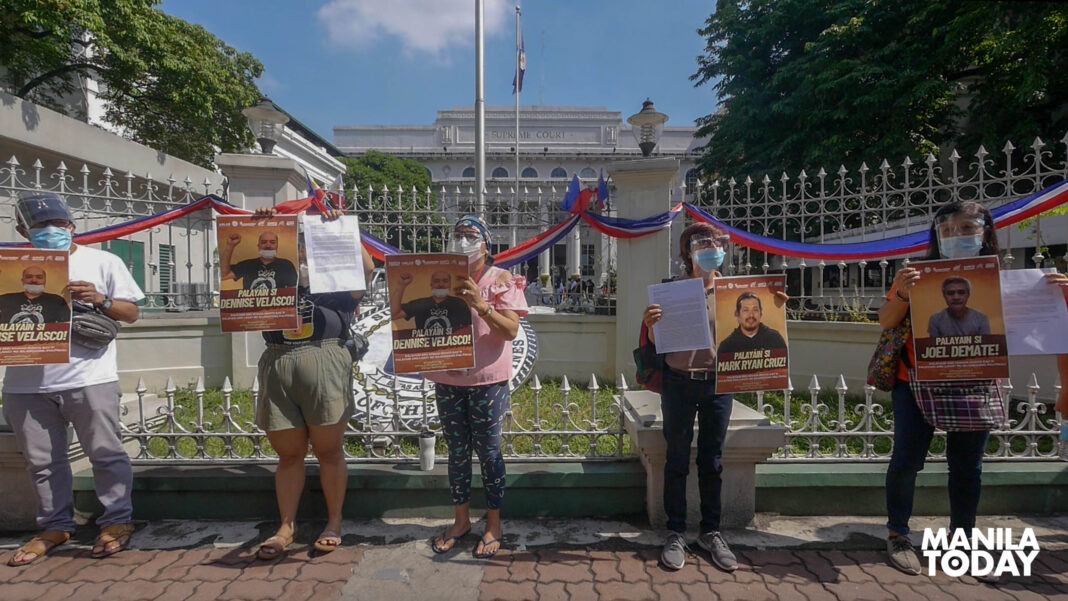 In time for the sixth month of detention of five labor unionists from Human Rights Day 7 (HRD7), their families and supporters and rights group Karapatan Metro Manila trooped to the Supreme Court (SC) to write to Chief Justice (CJ) Alexander Gesmundo.

They urged the new CJ look deeper into the irregularities of the search warrants, police raid operations and detention of all detained trade unionists, activists and political prisoners in the country. Gesmundo started his term of office as CJ on April 5.

QC Executive Judge Cecilyn Burgos-Villavert issued warrants to four locations of the HRD7 upon one hearing and police narrative that the seven are part of a gun-running syndicate. Falsehoods and material inconsistencies in such narrative had also been exposed in the Mandaluyong court case dismissal of Salem and Esparago.

Ella Durana, wife of Mark Ryan Cruz, decried that the continuing weaponization of search warrants and criminal cases have been used to systematically target and silence activists.

[Since 2019, the police have been so good at weaving stories, with Executive Judge Burgos-Villavert, to use the law and issue search warrants of questionable bases.]

The “script”, as families would call it, is the police enforcement of the search warrant via a midnight raid and “tanim-ebidensya” (planting of evidence) on activists’ homes or offices. There have too many cases like this, this has become so repetitive, almost like a cruel joke and yet this continues, lamented the families of HRD7.

Durana recalled Gesmundo’s statement before he sat in the post, saying that judges who are issuing the search warrants cannot solely rely on affidavits of the complainants as it would be tantamount to violation of constitutional rights.

[From the issuance of the search warrant from Villavert to the denial of the motion to quash in the trial courts, these are clearly violations of human rights and the Constitution.]

On May 28, the families submitted an appeal letter to SC Court Administrator Jose Midas Marquez to demand investigation on the irregularities of warrant implementation and the subsequent baseless detention of the HRD7 activists.

They also requested that records and information of the search warrants against activists must be released to or requested by trial judges by the issuing courts.

Some such requests were granted by lower courts, like in the case of Salem and Esparago, to give the defense a chance to scrutinize how the search warrants against them were obtained.

Some have been denied like in the case of Reina Nasino, Ram Carlo Bautista and Alma Moran, who were also raided on November 5, 2019 via a search warrant issued by Villavert. Nasino lost Baby River only a month after she was separated from her.

From Nasino’s case to the HRD7, the families also questioned how the police narrative of “gun running syndicate” against the accused on the application of warrants with the same judge has been conveniently reused.

Durana emphasized the consequences of these search warrants and police raids, such as the deaths of nine Southern Tagalog activists in what is now known as Bloody Sunday on March 7. Police reasoned that the killings were due to those arrested “fighting back” or “nanlaban”, another overused narrative in the Oplan Tokhang drug war killings that has

All these, Durana noted, were brought about by the issuance of search warrants as well as the tanim-ebidensya plot.

The group also held a “bike ride for freedom” protest from Liwasang Bonifacio to the SC before submitting their letters.