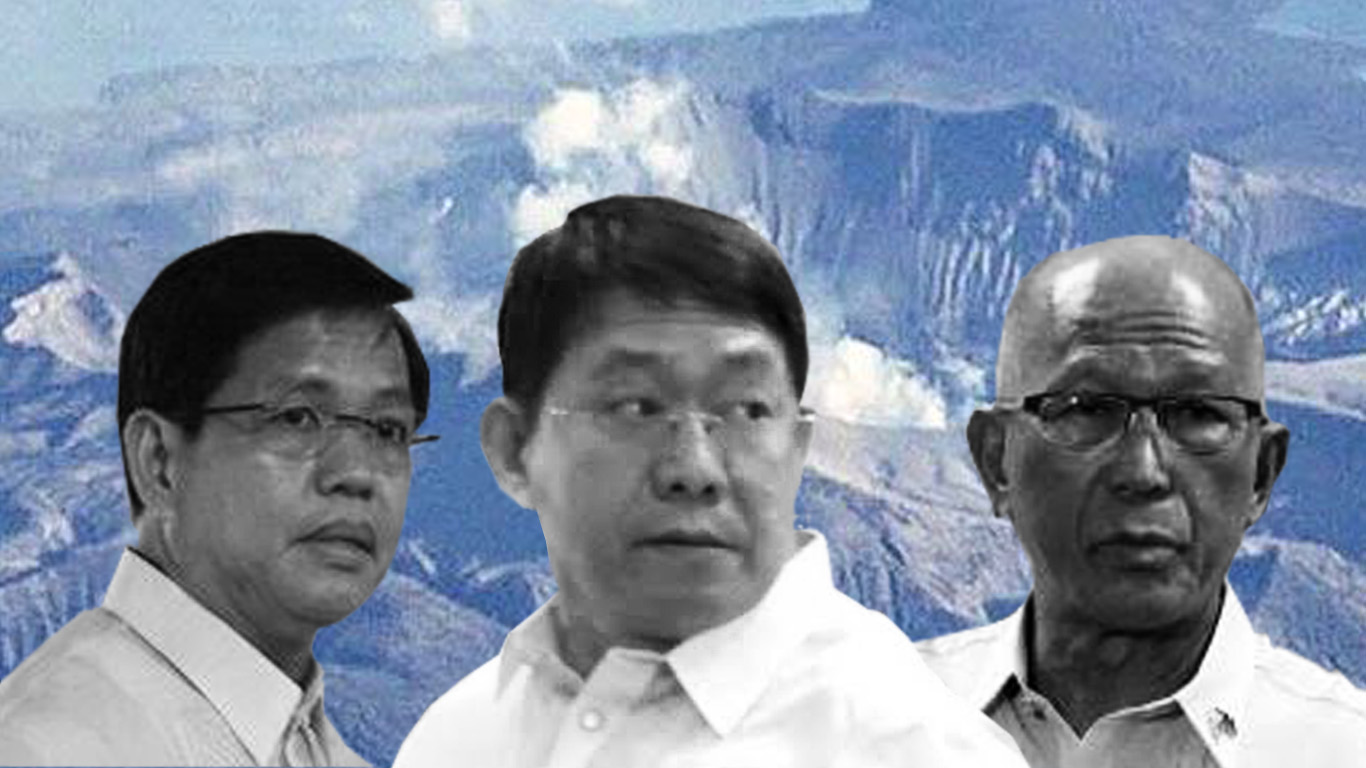 The lockdown order, a state of isolation or restricted access instituted as a security measure, hails from the militarist mindset of the very much militarized bureaucracy of President Rodrigo Duterte’s administration.

It is an easy order than to find ways to save the properties, even the small valuables and important documents of the victims of the Taal volcanic eruption. The lockdown is implemented within the 14-kilometer radius of the volcano, considered as its danger zone.

That cabinet officials of the government are military retirees now becomes a problem of the people when the government is on this mindset, one prone to insensitivity to the victims.

Because of this, the top NDRRMC officials are also former top brass.

The officials of the Disasters Risk Reduction Management Council (NDRRMC) is composed of the following:

The important government offices that would handle the rehabilitation programs in the affected provinces is the Housing and Urban Development Coordinating Council to be assisted by Technical Education and Skills Development Authority (TESDA). These agencies are headed by former military generals. What happened to Marawi now after the military siege?

DILG Secretary Año said, “98% of the residents in the barangays located within the 14-km high risk danger zone have been fully evacuated and the rest are undergoing evacuation.”

The towns of Agoncillo, Talisay and San Nicolas, Tanauan City are the areas where the lockdown was implemented. Tagaytay City had been ordered to temporary close shop.

Año ordered “window hours for some residents,” but depending on the instruction of the Philippine Institute of Volcanology and Seismology (PHIVOLCS). There are still more residents who are insisting to re-enter in their places to find and save their animals and other properties.

Who can blame the people who are defying the lockdown order? They need to re-enter the “prohibited areas” because their belongings had been left in their homes and farms. If the military and police who are manning the checkpoints and the authorities themselves are sensitive enough to the needs of the people, they can implement a limited and assisted re-entry. But because they are military/police officers, they follow orders, these easy, plain, and outright orders.

The Taal volcanic eruption victims claimed that they were not aware of any government announcements or warnings before the eruption. In fact, as reported, the tourists who were caught by initial “tremors” and caught the initial smoke out of the volcano videos had been visiting the crater of the volcano. Taal has been profitable for tourism and leisure for residents of Tagaytay City, Batangas, and even Laguna and the upland towns of Cavite.

The unexpected eruption of Taal volcano showed how government and the people are unprepared. The people—while living in an active volcano island or its lake or nearby towns—have left their homes, animals, farms, fish cages and other properties.

The NDRRMC estimated more than 200,000 individuals have been affected but it could be more of this number considering of the wide range of impact of the eruption. Not all of the victims went to the evacuation center and more were unaccounted.

The evacuees are safe in the evacuation centers for now but how long can they endure?

Duterte on Monday (January 20, 2020) urged Congress to provide a supplemental budget of Php 30 billion “for the construction of massive evacuation centers in disaster-prone provinces across the Philippines”, especially in provinces facing the Pacific Ocean.

If the towns covered by 14-kilometer radius are no longer suitable for the people to live, then the Php 30 billion pesos are not enough. Surely, many churches, humanitarian and non-government organizations, business people, investors and even foreign countries would want to help for rehabilitation and recovery. Still, in the course of rehabilitation for Taal Volcano victims, we must be reminded of the “rehabilitation” of Marawi City.

Even if these areas would be declared not suitable to live in, it does not mean that these places would be left idle. The investors are still eager to engage in developing the fertile land of the towns near Taal for profits.

As reported, the Department of Agriculture’s High Value Crop Development Program and Bureau of Plant Industry “are currently assessing damage on crops as it aims to also provide planting materials like coffee mother plants and cacao seedlings for replanting once everything is all cleared out.”

The tourism industry will still flourish because Taal will still open to tourists for temporary visits.

The so-called “disaster-resilient and sustainable plans” of the Duterte government are still in the long term, or what might not be realized during Duterte’s term. The long-term plans include the permanent relocation of the residents of the affected areas of calamities like Taal.

Senator Bong Go’s proposed bill’s explanatory note: “It is high time that the State establishes evacuation centers in all cities, provinces, and municipalities, which will cater to the basic needs of the victims of these disasters and provide them with temporary shelters that will guarantee their safety, promote their social well-being, and guard their welfare while they recover and rebuild their homes and their lives.”

Senator Erwin Gatchalian is also pushing for Senate Bill No. 747 “An Act Establishing Evacuation Centers in Every Municipality and City, Providing For The Necessary Facilities, Ensuring Their Structural Capacity, and Appropriating Funds.”

But addressing the relief and recovery of the affected people of Taal volcanic eruption is far from over.

(Other victims of calamities throughout the Philippines need also utmost attention. We should remember the victims of Yolanda, Marawi siege, Earthquakes in Mindanao, Tisoy in Bicol, Ursula in Panay, Mindoro and Samar, and many other victims of natural and human-made calamities.)

The suffering of the people of the towns of Batangas affected by Taal volcanic eruption of course started with the unexpected eruption, but it worsened when they are prohibited to re-enter their places. And it will become worst in the relocation and rehabilitation in the future if these plans do not take the people’s concerns first and foremost.

The Duterte regime would come up with many plans for Taal. However, the original residents of the towns that surround Taal would be prohibited to return, depriving them of a part of this imagined or planned development for the areas on lockdown.

March 29, a Sunday, no celebration of Holy Eucharist but still a fruitful one