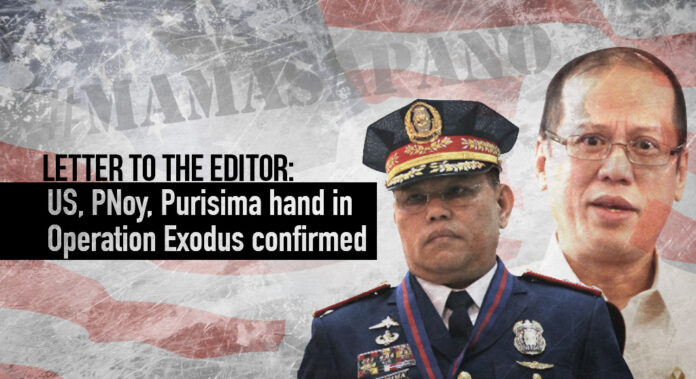 The Senate hearing on February 23 confirmed the knowledge and participation of no less than President Benigno Aquino III or PNoy in Operation Wolverine/Exodus. Suspended police chief Alan Purisima’s sharing of his text exchange with PNoy confirms that PNoy knew of the execution of Operation Exodus as early as 5:45 am. Following text messages would confirm that PNoy gave orders to Purisima, for example to go after Basit Usman. Purisima also appeared to be the one who coordinated between the president and the commanders on the ground. Today’s hearing also confirmed that relieved Special Action Force (SAF) chief Getulio Napenas reported and received orders from Purisima, even after the latter’s suspension. These are simple, commonsensical truths that were being confused in last week’s hearings.

[quote_center]Allies of PNoy now find it hard to defend him, but try very hard to shield him from being linked to any accountability to Operation Exodus[/quote_center]

Allies of PNoy now find it hard to defend him, but try very hard to shield him from being linked to any accountability to Operation Exodus. But that would take the fabrication of so many lies between different government institutions and its leaders who are at this point disunited, disgruntled or unwilling to take the blame. That would take more of PNoy’s friends and allies to be sacrificed—first Napenas, now (apparently) Purisima. That would take facing the public with still no straightforward answer to the question “Who is responsible for the Mamasapano bloodshed?”.

The said hearing also featured a blanket denial of US participation made by the Department of Foreign Affairs (DFA) and assented to by government officials present in the hearing. A display of utter stupidity is in order for the senators, Cabinet officials, AFP and PNP generals to continue denying and ignoring US hand in Operation Exodus. Some Special Action Force commandos, Mamasapano residents and Maguindanao mayor have already described the many ways the US engineered and participated in the operation.

If (these) government leaders continue to obscure and deny US transgressions to Philippine sovereignty with their readings of laws, rules and unilateral treaties, they should be made responsible as well for the lives lost in Mamasapano and the lives that will be lost in the future in US’ rabid pursuit of their war on terror in our territory or at the expense of Filipino lives.

After three public hearings and a few executive sessions, only Senator Gringo Honasan asked after the residents in the communities that were affected. The civilians killed were unnamed; they were not decorated as heroes. But they died when US brought its own war to our doorstep and we let it in.

Instead of peddling old school chauvinistic anti-Moro sentiments, government leaders would do well to recognize that the peace process means not only armistice, but also more importantly addressing the roots of conflict—poverty, hunger, and the lack of social justice.