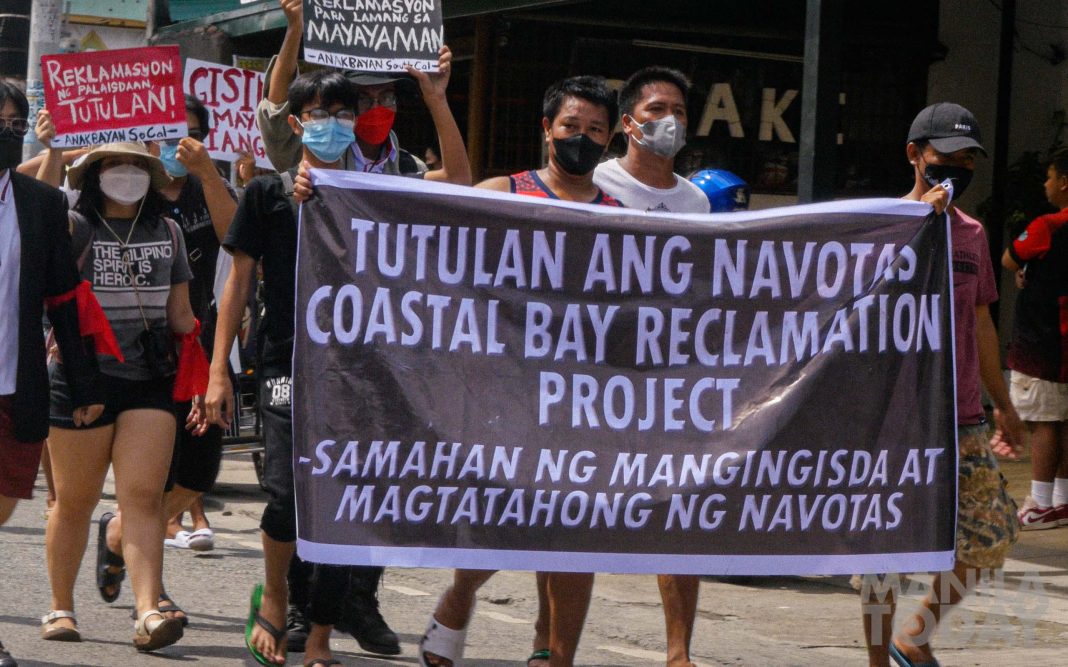 [The sea waters that will be dumped for land conversion? It would only destroy more than 576 hectares of land for such an ambitious project. They have no heart for those who would lose jobs, especially during the pandemic]

Fisherfolks and mussel growers in Navotas stormed the streets near their local City Hall to request a dialogue with Mayor John Rey Tiangco regarding their firm opposition against the Navotas Coastal Bay Reclamation Project (NCBRP) but had only fallen on deaf ears and police blockade.

The livelihoods of residents and fisherfolks will be severely affected should the local government pursue the ambitious 576-hectare reclamation project. More than 200 mussel farms and several fishing structures are threatened to be dismantled along with its abundant fisheries and marine resources.

[Thousands of families will be in deep poverty, starve in hunger, and lose their jobs. When these mussel farms and fishing structures are removed, the fish will really lose their sanctuary]

Environmental activists and fisherfolks strongly opposed these projects which would only displace the fishermen from their livelihood and destroy the environment.

However, the Department of Environment and Natural Resources issued environmental certificates (ECC) to the reclamation projects in Manila Bay, including the NCRBP.

Dubbed as the “Southern Gateway to the Manila International Airport” in Bulacan, the Philipppine Reclamation Authority envisioned NCRBP as a self-contained mixed-use community with industrial, commercial, institutional, and residential areas.

Navotas town has the San Miguel Corporation (SMC) as a proponent of the NCRBP.

According to BAYAN NCR, It is unfair that Navotas LGU consistently denies the renewal of fishing permits among fisherfolks even though the fishermen submitted and followed the requirements.

BAYAN NCR noted that the Navotas LGU alongside SMC and DENR has ultimately violated the 2008 Supreme Court Mandamus ruling. In fact, thirteen government agencies were directed under the SC Mandamus to clean up, restore, and rehabilitate the body of water for recreational use and fishery resources development.

And with NCRBP at work with its intent to dismantle the fish pens, the fisherfolks have nothing to expect from the government which also paved connections to big businesses like SMC owned by Ramon Ang.

Just last August, such public-private partnerships (PPPs) are what the Marcos Jr. administration pushed for LGUs to explore in the so-called promotion of infrastructure and services development. Even the house speaker, who is also Marcos Jr.’s first-degree cousin, Martin Romualdez expressed his support for this call.

[What the local fishermen in Navotas need now is the Navotas LGU’s immediate response to the fishermen’s right to livelihood, housing tenure, and not reclamation]

In the end, the group and resident fisherfolks reverberated the call on Navotas Mayor Tiangco to heed on their dialogue request with the local fishermen.