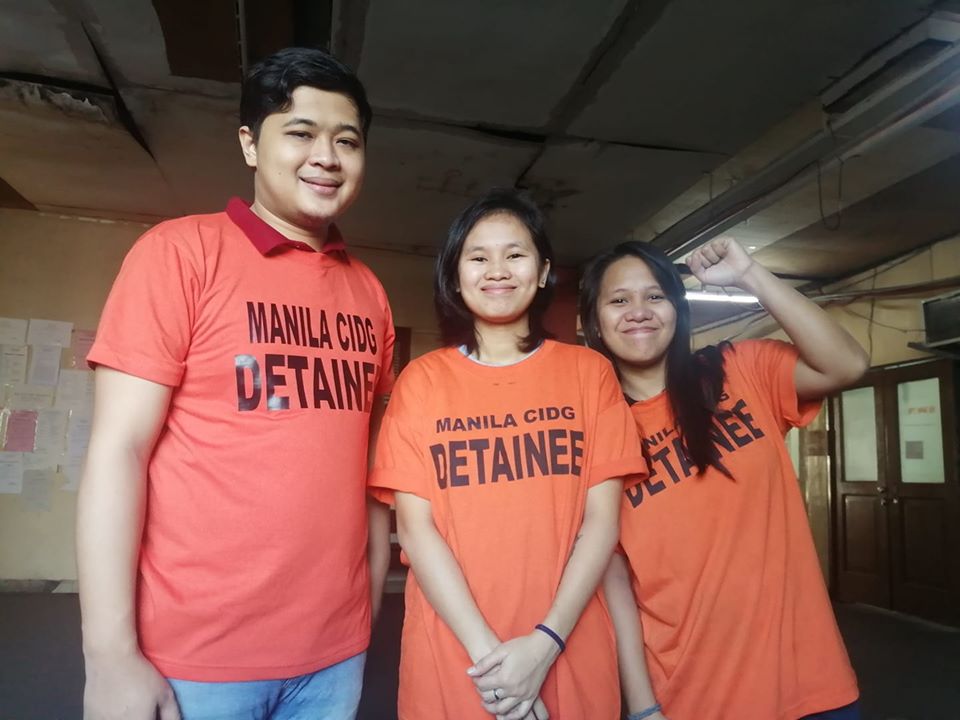 The Court of Appeals (CA) junked the trumped-up cases against Reina Mae Nasino, Alma Moran, and Ram Carlo Bautista who are collectively known as Tondo 3. They were arrested in a midnight police raid crackdown at the BAYAN Manila office in Tondo on November 5, 2019.

For nearly three years, they endured jail confinement due to accused police of planting guns and explosives, in which to reiterate, a distinct narrative in almost all illegal possession of firearms and explosives charges police filed against activists.

The CA Twelfth division noted in its 36-page decision the doctrine of ‘fruit of the poisonous tree’, implying that the planted evidence allegedly seized from the Tondo 3 failed to meet the standards and hence cannot be used against them for which it is deemed inadmissible.

“Search Warrants Nos. 5944 (19) and 5945 (19) are declared VOID for failure to meet the standards of a valid search warrant, and all evidence procured by virtue thereof are deemed inadmissible,” it read in the appellate court decision.

According to the National Union of Peoples Lawyers (NUPL), who also stood as the legal counsel for Tondo 3, the CA underscored the glaring inconsistencies in the address and description of the search warrants which “could not have been missed by the ordinary eye.”

“The decision also emphasized that these inconsistencies further indicate the lack of probable cause as it readily shows that probing questions were not propounded to the police applicant and his witnesses, where such important details relating to the description and location of the place to be searched would have been clarified,” NUPL added

All these series of search warrants came from Quezon City Executive Judge Cecilyn Burgos Villavert. And according to the CA, these warrants are deemed irregular thus being subject to fruits of a poisonous tree with obvious remarks of more than enough to debunk the presumption of regularity of performance of official duties.

On the other hand, a group of political prisoners kin KAPATID said that there should be no means of Nasino, Moran, and Bautista to stay in jail because of the CA decision, exposing that these is but a narrative of “pure police invention”.

“We ask the courts to order their prompt release. Let Reina Mae now visit the grave of her baby daughter and mourn her in peace, which was so cruelly denied her during the wake and burial of River,” said KAPATID spokesperson Fides Lim in a statement.

Nasino gave birth to her child named baby River on July 1, 2020 while inside the prison. After almost a month, they were both separated on August 13; clearly disregarding the fact that her baby needed adequate maternal care as though it was born with low birth weight, yellow skin discolouration and diarrhea. Unfortunately, baby River passed away on Octover 9 due to complications in pneumonia.

Nasino was in fact able to see baby River once more, but only inside the coffin already. She was granted a three-day furlough so that she would be able to visit the wake of baby River. But at least 47 police escorts, forced their way to assist Nasino while she was already garbed in personal protective equipment (PPE) with hands still in shackles.

At that time, rights groups said that Nasino in fact does not need an assistance from cops. As a grieving mother, what she needed was the time to process and mourn for baby River along with her family who had just lost a loved one. Especially on her behalf, that she had just lost her baby because of the fact that she also lost her liberty.

“While the decision now spells freedom from almost three years of unjust imprisonment for these activists, it could not bring back the days and months lost for them that they could have spent with their families, colleagues and for the legitimate advocacies for the workers, the urban poor and the marginalized that they have always been promoting,” NUPL added.

KAPATID saw a trend of court releases of activists since the Mandaluyong court decision to release Manila Today editor Lady Ann Salem and Samahan ng Manggagawa sa Quezon City labor organizer Rodrigo Esparago among the apprehended individuals in the Human Rights Day crackdown in December 2020. The couple were among the seven arrested and they were collectively known as HRD7.

Charges akin to the rest of arrested, firearms and explosives item were allegedly seized but from the couple but were deemed inadmissible and fruits of the poisonous tree by the regional court presided by Judge Monique Quisumbing Ignacio.

“The dismissal of Villavert search warrant cases picked up following the Supreme Court circular issued in July, which responded to appeals of human rights lawyers and groups to scrap the power of Manila and Quezon City judges to issue search warrants outside their judicial region,” Lim added.

Lim further appealed to release the rest of the political prisoners including her ailing husband Vicente Ladlad, 73, and Alberto and Virginia Villamor, 68 and 70 respectively. They have been in jail custody for nearly four years charged with a similar arrest on November 2018.

“We appeal to all courts trying cases that also arose from the search warrant factory of Judge Villavert to take a hard look at the inconsistent and incredulous testimonies of police witnesses and likewise dismiss the cases for clearly being trumped up against activists,” Lim stressed.

Concerned Students for Justice and Peace slammed the infamous QC judge Villavert and Judge Balisi Umali who denied the urgent motion filed by Nasino as she requested to be moved to a hospital along with baby River for maternal care and protection from COVID-19.

[Burgos-Villavert should be held accountable for her wanton use of defective search warrants against activists alongside Judge Balisi-Umali because of her negligence and heartless decision to separate Reina Mae and Baby River. They are inutiles within the judiciary system that should be removed]

CSJP also aired that there should be no further reasons for barring the freedom of Tondo 3 amid CA decision.

[The Tondo 3 suffered almost three years in prison—a long period of harassment and violations of their human rights. There is no reason to keep them in jail any longer, they should be released immediately]