Home OPINION Ferguson to the Philippines 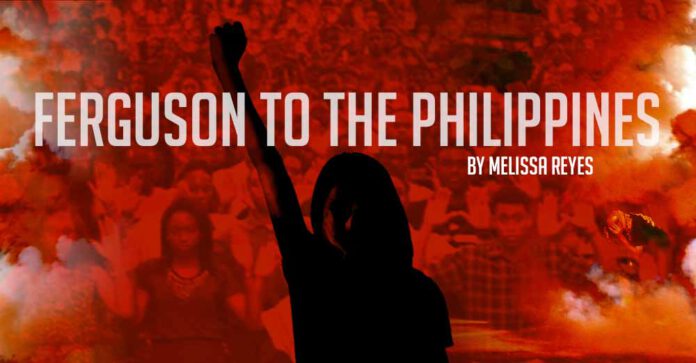 I am a Filipino American woman and mother. Like the rest of the United States of America and most of the world, I heard the grand jury’s decision. The non-indictment of Darren Wilson. This verdict spoke volumes and for communities everywhere, it reminded us that another young black man’s life is not valued in the United States. And like so many, I was not surprised. And as the case with so many, a flood of grief engulfed me. As I stared blankly at the television, my five-year-old daughter’s curious voice cut through the silence. She asked, “Mama, what happened? Why are you crying?”

I am enraged at this grand display of injustice because this verdict has been repeated over and over in the annals of history. Like many of my peers, I have been paying attention to the abundance of news and commentary on social media, having discussions with family and friends, participating in local protest actions and marches in honor of Mike Brown and in solidarity with his family and all of Ferguson, Missouri. Because far from a meaningless hashtag, I believe that black lives matter during this political moment that pushes the narrative that we live in a post-racial America.

As the deaths of countless unarmed, young black men continue to make headlines, it begs the question of accountability from their perpetrators, whose protection is often embedded in the law. I find that what is particularly painful about the grand jury’s decision is the global context it is placed in as civil unrest continues to rage around the world, largely in response to cultures of impunity connected to state-sponsored violence and militarization. There is a knot in my throat as my daughter’s question echoes in my mind and as I try to form the words to explain to her that another mother’s son was killed. That her son’s name was Mike Brown. That Darren Wilson, the man who killed him, did not have to apologize, or go on time out, or face the consequences of his actions.

I traveled back to the Philippines this past summer where I visited communities most affected by state-sponsored violence and militarization and came back to the US to the news of the death of Mike Brown. I stayed in a particularly contentious area called Hacienda Luisita, a sugarcane plantation during the time of Spanish colonization, now owned by the powerful and influential Cojuangco-Aquino family, the family of the incumbent Philippine president Benigno Simeon C. Aquino III. The people I met and stayed with have been struggling for land justice and democracy for decades, and 10 years ago state forces led a massacre, killing seven young men and wounding scores others. I reflect on my time there and I make the necessary connections across communities. Seeing images of Ferguson on fire and hearing accounts of looting and destruction of property from mainstream news outlets reminds me that those who feel the impacts of violence every day and most intimately are the same people who are on the front lines, fighting tirelessly against impunity and for justice, taking back their communities from Ferguson, to Mexico, to Palestine, to the Philippines.

I am a Filipino American woman and mother who calls for justice for Mike Brown, Ferguson, and all communities experiencing state-sponsored violence.