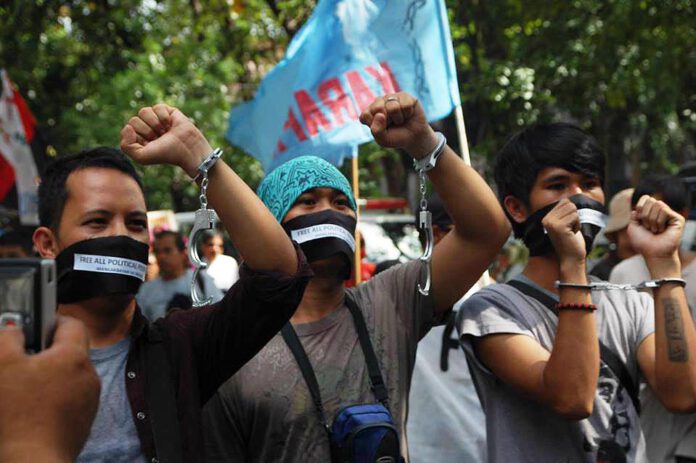 About 100 political prisoners from 11 provincial and city jails including detention centers across the country declared their participation to a week-long fasting starting Wednesday, December 3.

The week-long fasting called for the release of political prisoners and for the government to put an end to “criminalization of political acts.” Covered in the said “criminalization of political acts” is the jailing of human rights advocates, women’s rights activists, workers of non-government organizations and their family members among others.
“Activists and organizers among the poor are arrested, slapped with various charges, usually heinous crimes and usually crimes not connected with their political activities such as kidnapping or murder of soldiers who are actually killed in clashes with the New People’s Army. These political prisoners languish in jail until all those cases could be dismissed. By jailing these advocates, the government aims to silence and immobilize them for the years they remain in jail, plus they suffer the emotional torture and hardships inside decrepit government detention facilities,” said Loy Villarias, coordinator of Karapatan Metro Manila.

The said fast will culminate on December 10, the International Human Rights Day.

Various organizations, meanwhile, trooped to the Department of Justice (DOJ) in Manila, Wednesday, to call on the government to release the political prisoners and stop criminalization of dissent.
According to SELDA national coordinator Jigs Clamor the protest march was held in solidarity with the fast of
the political prisoners. SELDA said they have long opposed “the government’s practice of criminalizing political actions and filing trumped up charges against those perceived as ‘enemies of the state’.” SELDA is a group of political detainees, their families and supporters.

“The political prisoners are not the enemy of Filipino people. It is the plunderers and those who perpetuate

human rights violations, the killings, disappearances, torture and harassment who should be jailed,” Clamor said.

Clamor said the jailing of activists and human rights advocates has continued under President Noynoy Aquino.

The solidarity march from Liwasang Bonifacio stopped in the Manila Regional Trial Court (RTC), where the hearing on the cases of Benito Tiamzon and Wilma Austria-Tiamzon was held. The Aquino government arrested the Tiamzon couple, said to be the top leaders of the Communist Party of the Philippines, in Bgy. Zaragosa, Alouguinsan, Cebu on March 22 this year. They are now detained on charges of murder, multiple murder and frustrated murder. The Tiamzon couple identified themselves as peace consultants of the National Democratic Front of the Philippines (NDFP).

Hearings on cases of other detained NDFP peace consultants were also held in the Manila RTC today. NDFP has previously criticized the Philippine government’s non-compliance with existing agreements derived from the peace talks between the two parties, such as the Joint Agreement on Safety and Immunity Guarantees (JASIG) that assures the safe passage and non-detention of peace consultants.

From the Manila RTC and the DOJ, the protesters marched to the Philippine General Hospital where political prisoner Miradel Torres is confined with her newborn son.

Lumad and peasants from Mindanao, who trooped to Manila to call on the Aquino administration to pull out military forces operating in their communities, joined the protest march.

According to Karapatan, an alliance advocating for the protection of human rights, there are a total of 491 political prisoners in the country. Of the number, 220 were arrested under the term of President Noynoy Aquino under various charges.