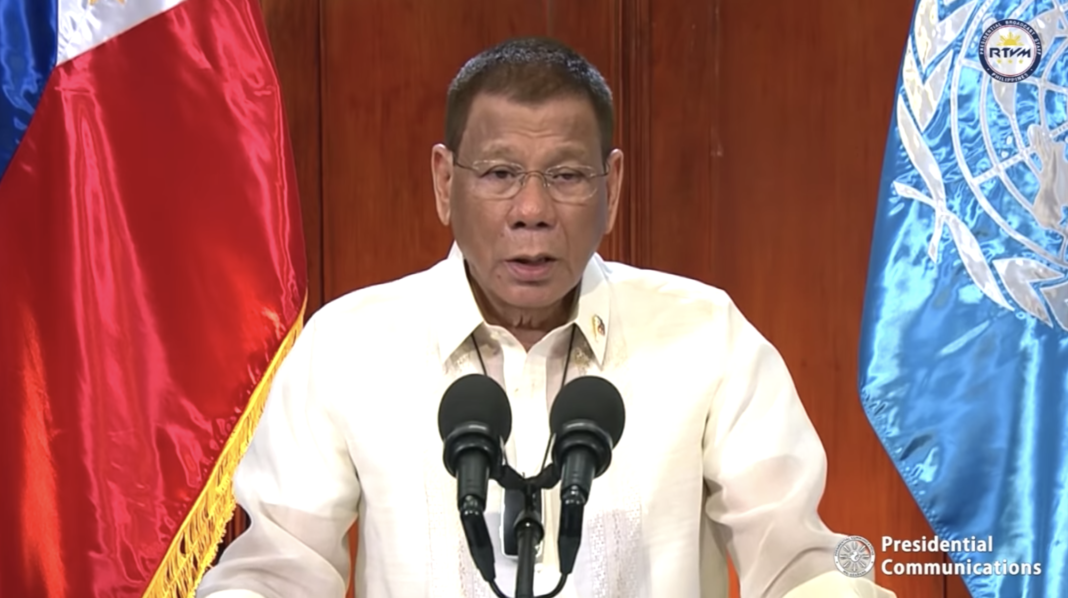 On the evening of September 22, the Address of the Philippine President Rodrigo R. Duterte to the 75th Session of the General Assembly of the United Nations (UNGA) was aired.

Listening to the speech is so much different, could have been refreshing from the weekly public addresses on COVID-19 that has become uninteresting for the lack of real, NEW updates and the plans for recovery the people need to hear, as well as that the pre-recorded and edited speeches have become a bit more candid again, including the cursing and profanities, tirades against select people, once more.

One would have wanted to give Duterte the benefit of the doubt. However, the biggest lies in his speech about his government defending human rights and upholding UNCLOS decision on West Philippine Sea were too nasty to ignore. There were also quite a few fibs or misleading statements here and there.

He was posturing as defender of human rights, human life and human dignity to the world, but could not also help but defend and justify the killings in the war on drugs, all the activist killings even during this pandemic–if only to consider them as enemies of his drive against illegal drugs, criminality, and terrorism that he said his government will protect people from.

In his address, he first made mention of the COVID-19 as “invisible enemy“, he expressed his grief of the death of people around the world. He said that “the Philippines grieves with all of the families all over the world who lost their loved ones to this horrible virus.” A sentiment that quite reflects a universal sentiment and a very polite extension of condolences to everyone who lost someone to COVID-19.

He thanked health workers, first and foremost, not just of the Philippines but of the world. That is quite diplomatic. He forgot to thank and recognize health workers in his State of the Nation Address and also forgot to mention that health workers would be among the first to be given the COVID-19 vaccine when the country gets it, but did not forget to say that he would give to the rebels but they must get it from the military camps.

He said, “We need a WHO that is quick to coordinate and quicker to respond. The Philippines will do its part in the pooling of global resources. Our health workers are among the best.” Swiping at the WHO, but look at our own Department of Health and IATF? We could not simply abide simple rules and “scientific” and internationally-practiced health protocols that we had to report making a distinction between late and fresh cases in daily cases reports, and there were even deaths reported as late as four months, implementing weekly “mass recoveries” where the tens of thousands added each week still surpass the mass recovery. Or the IATF lowering physical distancing to 0.75 meters, only to take it back due to public flak.

Duterte offered the Filipino health workers as the Philippine contribution to “a global health agenda with enough resources and policy space for the World Health Organization.” This was despite the total deployment ban in the country for health workers—lifted only partially to those who have perfected contracts until August 31, that would allow more than 1,000 to leave, but more than 200,000 nurses remain unemployed in the country, according to a nurses’ group.

The most controversial statement in his speech is this: “The Philippines will continue to protect the human rights of its people, especially from the scourge of illegal drugs, criminality, and terrorism.”

He discredited groups that criticized his records of human rights violations. He said, “A number of interest groups have weaponized human rights; some well-meaning, others ill-intentioned. They attempt to discredit the functioning institutions and mechanisms of a democratic country and a popularly elected government which in its last two years, still enjoy the same widespread approval and support.”

“These detractors pass themselves off as human rights advocates while preying on the most vulnerable humans; even using children as soldiers or human shields in encounters. Even schools are not spared from their malevolence and anti-government propaganda,” he said.

But the bodies of those killed in the drug war, of activists killed during the lockdown and pandemic just after they were red-tagged by state forces are no propaganda—they are only some of the evidence of Duterte’s terrible human rights record in four years as president.

He is “open” for a “dialogue and constructive engagement with the United Nations, however, he made a warning.

“But these must be done in full respect of the principles of objectivity, noninterference, non-selectivity and genuine dialogue. These are the fundamental bases for productive international cooperation on human rights,” he added.

This is just lip service. The Duterte administration said and acted to bar international investigations on the war on drugs. In fact, a simple criticism of his drug war has made Duterte livid and a bigot, calling former US President Barrack Obama, who called out his drug war, ‘black’ as if it was an insult.

Duterte boasted the Philippines’ Anti-Terrorism Act of 2020, better known as the “terror law”, even as a bill introduced in the US Congress sought to stop US military aid to the Philippines, as maybe he thinks the international community is unaware of the laws’ contents, how hastily it was passed, or that at least 34 petitions have challenged it in the Supreme Court, including former Supreme Court justices.

With the Anti-Terror Law, Duterte assured that “we remain committed to rebuild stricken communities and address the root causes of terrorism and violent extremism in my country.”

After presenting the concerns mentioned above, Duterte pledged to be mindful of the Philippines’ “obligations and commitment to”:

Another barefaced lie Duterte said: “The Philippines affirms that commitment in the South China Sea in accordance with UNCLOS and the 2016 Arbitral Award.”

This is the first time you would hear him say it. He cannot assert the sovereign right of the Philippines in the disputed West Philippine Sea. He said he cannot or we end up in a war we will lose. He has allowed further Chinese encroachments while blaming his predecessor for when these encroachments started. He also does not want to assert our sovereignty or the UNCLOS decision favoring us—especially now, so long as China promises to give him the vaccine. The plunder of the Philippines’ natural resources contradicted to his call for the preparedness and resiliency of the climate crisis.

His independent foreign policy meant peddling to all countries and not just the US—and during this time, anyone who promises to loan their vaccine to the Philippines—Russia, US, maybe a quid pro quo for the Visiting Forces Agreement no longer being cancelled or the killer of transgender woman Jennifer Laude being given an absolute pardon from the president just halfway through his reduced sentence even if his camp did not apply for it.

Duterte also talked about welcoming refugees. This would have been really believable had his administration not militarized peasant and indigenous peoples communities, especially in areas of business interests of multinational corporations from US, China and other superpowers, giving rise to internal refugees of our own. One such example is the China loan-funded Kaliwa and Kanan Dam set to displace the Dumagat and flood their ancestral lands and the resting places of their ancestors. Or the forced displacement of Lumad through bombings, militarization in the Pantaron Range, the last remaining old growth or primary forest blocks in Mindanao, closely losing out to nearby big, foreign plantation and mining interests. This has also displaced Lumad students from their community schools from where they have learned to develop farming and agriculture, care for the environment and most of all, their rights. Their human rights.

As the President was about to end his address, he said polite words aim to inspire and soothe to all nations and the Filipino people as well.

“We cannot bring back the dead but we can spare the living; and we can build back better, healthier, and more prosperous and just societies,” Duterte said.

“Let us strengthen it so it can fully deliver its mandate to maintain peace and security, uphold justice and human rights, and promote freedom and social progress for all,” he concluded.

Is this Duterte speaking?

Sticking to a prepared speech suited Duterte. However, he has already exposed to the Filipino people that he is capable of killing people and that he has killed. His presidency killed a lot of people, mostly poor and many also were activists, critics. There were also 17 journalists killed under his watch.

As the United Nations celebrate its 75 years of existence, Duterte mocked address us all, speaking of things that does not reflect his kind of leadership and the just reading out the opposite of the things he has done.