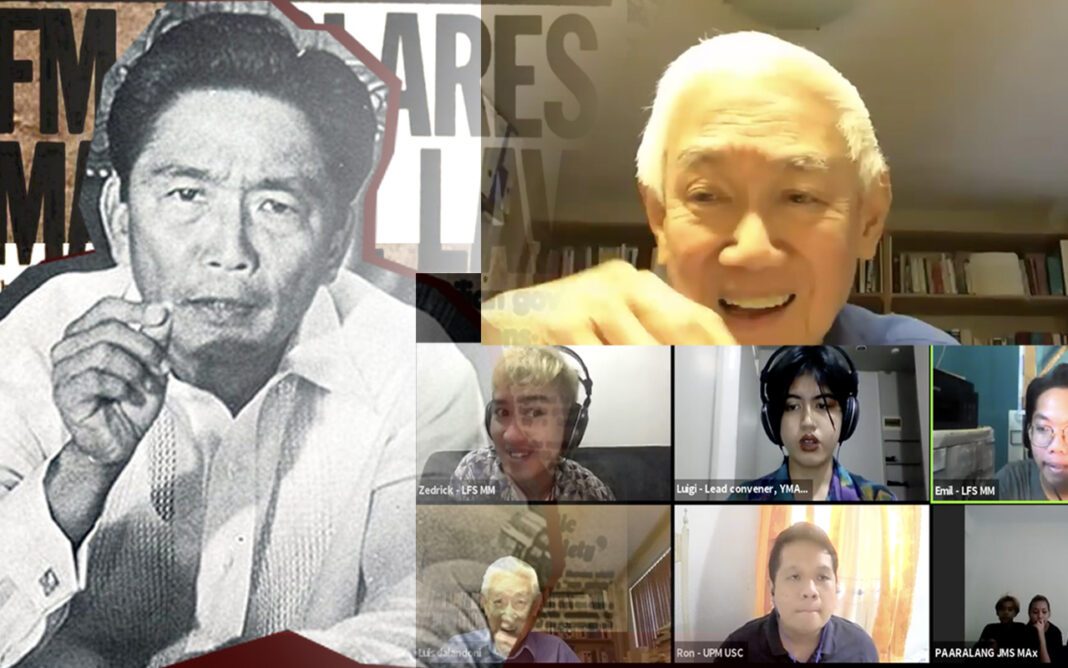 The UP Manila University Student Council (UPM USC) along with the Youth Movement Against Tyranny (YMAT), League of Filipino Students (LFS) Metro Manila, and Paaralang Jose Maria Sison launched a webinar entitled “Martial Law Noon at Ngayon: Dissecting the Marcos and Duterte regimes” as part of Kontra-Agos: Sa Paglaban at Paglaya, a week-long commemoration of the 48th anniversary of Marcos’ Martial Law.

The program started with opening remarks from YMAT UP Manila Convenor Ron Erasmo and then a cultural performance from SABAK with their rendition of “Upuan” by Gloc-9.

Prof. Joma Sison began his talk by giving praise and recognition to those who fought during Marcos’ Martial Law and encouraged people to emulate them.

“We must be inspired by the people’s resistance that ultimately overthrew the Marcos fascist dictatorship.” he said.

He also explained how the country’s semi-feudal and semi-colonial characteristics allowed both foreign and local oppressors to easily exploit the Filipino people and bring about a “chronic crisis” to the country. Moreover, he said that Marcos took advantage of the worsening economic and political crisis to justify his martial law and even exaggerating the number of communist rebels.

Sison compared this to Duterte and his militaristic approach and the passage of repressive laws and policies. He claimed that these acts are only for their self-interest.

“Like Marcos, his real objective in ruling with mailed fists is also to enrich himself from overpriced infrastructure projects and onerous loans.” he said.

He likened the way Marcos’ feigned interest in changing the semi-colonial setting of the country to Duterte pretending to be an ally of the national democratic movement.

“Prior to his election as president, Duterte took the same demagogic path of Marcos, pretending to be a sympathizer and ally of the patriotic and democratic forces and even of the revolutionary movement even as he became increasingly notorious for engaging in the extrajudicial killing of suspected common criminals and drug users and pushers.” he claimed.

However, in a positive light, he mentioned the growing force of the revolution in countering fascism.

“From one regime to another, these revolutionary forces have overcome all counterrevolutionary campaigns of suppression and have grown in strength through revolutionary struggle.” he said.

Ka Luis Jalandoni followed by sharing his experiences during Martial law. He remembered how the struggle of sugar workers and peasant settlers enlightened him as a priest. His involvement in their fight grew as he became a member of Christians for National Liberation.

He recalled how the rise of fascism under Martial Law forced him to go underground along with the others to continue the movement. Nevertheless, he says to have witnessed the growth of the revolutionary forces and activism in the country as years went by.

Furthermore, he tackled the issue of Duterte serving two imperialist powers, China and the US. According to him, Duterte showed which of the two his “absolute master” is when he gave absolute pardon to US Marine Joseph Pemberton, Jennifer Laude’s killer. He also proclaimed that Duterte has no intention in establishing just and lasting peace, shown by his termination of the peace talks.

At the end of his talk, he gave words of encouragement to the youth and reassured that they, with the people, will win against the repressive fascist regime.

“The youth can use its courage, its creativity, its energy, this is clear in history, its indomitable will to fight and win!” he exclaimed.

“The attacks of the Duterte regime against the democratic rights of the people will perish before the undying struggle of the youth and the entire people.” he added.

He said that the current administration has been normalizing violence in the country.

[Ever since then, violence has been normal as every day, and every night we hear news on the killings of suspected drug users or pushers.]

[Of course, it has been proven in these cases that the police are only planting evidence of drugs upon the victims to justify their violence.]

Fernando talked about Duterte using military forces as a resort to the pandemic during the lockdown and dubbed it as a “rehearsal” to a fascist rule.

He mentioned various policies created by the government that minimizes the space for democracy such as the Anti-Terror Law and the establishment of the National Task Force to End Local Communist Armed Conflict (NTF-ELCAC).

However, he reminded the audience that they must continue the fight.

[We must mobilize more and not let ourselves be afraid of Duterte’s fascist regime.]

The webinar proceeded with a question and answer portion and ended with closing remarks from Lou Trinidad of YMAT.