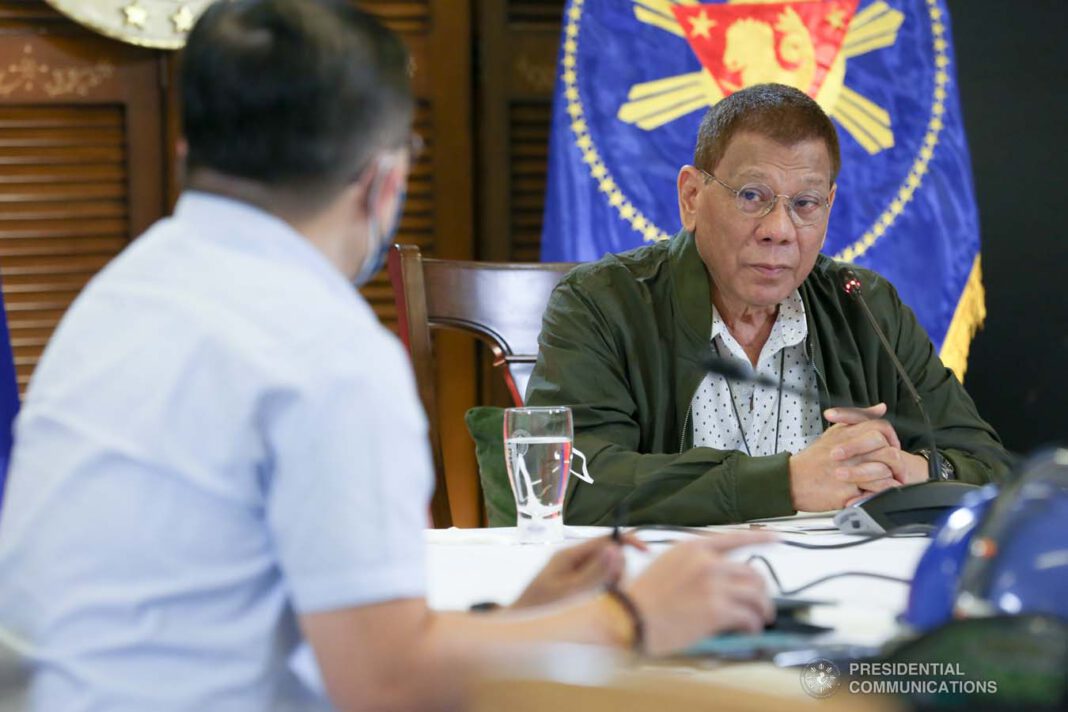 On late evening of September 21, President Rodrigo Duterte presided a meeting with members of the Inter-Agency Task Force on Emerging Infectious Diseases (IATF), with the following main pronouncements:

In all of these concerns, Duterte was elated with the performance of DENR Sec Roy Cimatu for bringing the crushed dolomite “white sand” mined from Alcoy, Cebu to Manila Bay. The praising of Cimatu was the opening statement of Duterte. Duterte claimed that Cimatu lived up his challenge of cleaning up the bay, and now the “people are really enjoying the reclaimed area” despite criticisms and that people are now enjoying the benefits.

The “dolomite beach” is a subject of criticisms because amid pandemic, the DENR loaded 500 tons of powdered dolomite ‘white sand’ mines from Cebu and dumped at 500 meters of Manila Bay, with a total of 190 kilometers of coastline. The first phase of piling is in the ‘priority area’ of the ‘beach nourishment’ project in its 120m x 60m area. The project cost P 28 million from the P389 million approved budget for the rehabilitation of Manila Bay for 2020.

The money could have been used for sorely lacking aid for all Filipinos, as all of us are affected by the pandemic and six months lockdown or community quarantine, yet aid has been selective and until now the aid for the last of two tranches for the month of May for a small fraction of the population is still being completed.

The DOH once said the crushed dolomite is a health hazard but retracted the statement the following day after accepting the DENR explanation that the particles are much bigger. Environmentalists have decried how the mining and dumping were both environmentally destructive to both Cebu and Manila, where in the latter it constituted reclamation yet ironically Duterte said he is not for reclamation.

The DENR publicized the opening, invited media and bloggers a day before the public opening. And when it was opened to the public on September 20, there was crowding, mass gathering and violations of physical distancing—which we could really say happened at the behest of this government. It may be remembered that the presidential spokesperson said that project would be good for mental health. The unfortunate crowding caused the Ermita PNP police station commander because of the health hazard this government-mandated excursion to the Manila Bay white sand of reportedly more than 20,000 people who went there posed.

And we all know, the “white sand” dumping is not cleaning up the bay, with the rehabilitation’s objective to make it swimmable. Even the DENR said so, this was just “beach nourishment.”

All the reports of the secretaries were nothing new and we have heard before from the daily public briefings of the DOH and the Presidential Spokesperson with the Presidential Communications Operations Office (PCOO) and have been repeatedly reported by various media outfits. The returning OFWs, the return to 1 meter physical distancing in public transportation, closure of cemeteries nationwide from October 29 to November 4, continuation of investigation and filing of cases on officials involved in SAP anomalies—these have all been reported before. NTF COVID 19 chief implementer Carlito Galvez, Jr. has been opening his reports with “adding to Duque’s”—on testing, quarantine facilities—really not much new here.

Yet we experience a déjà vu as these are again reported to Duterte in the weekly IATF meeting. Could not just Duterte read, listen or watch the news along with the rest of us and not need his own televised weekly rundown? If Duterte or the Presidential Spokesperson would say of course he already knew this, this is a matter of reportorial requirement to the public—oh please, stop wasting our time. We still have not heard until now their plan for recovery, yet we get inundated by news and updates we have already heard earlier.

In the light of the happiness of the President, it cannot be denied that the report of the DOH Secretary on the COVID-19 situation is the main problem. Despite expressing his satisfaction, Duterte rambled on again about the vaccine—something certain for December a few weekly presidential addresses ago, but now we have heard other months being dropped in the possibility of the vaccine’s arrival. When Duterte stresses the vaccine, it could only mean they are biding their time as they continue to be unable to control the spread of COVID-19 cases in the country. Three thousand a day on the average? Wow, that is nothing to be satisfied or smug about. Start being smug when we are counting days of no COVID-19 cases—as many neighboring countries have been able to experience.

This part in his speech could not be more illustrative of the point that they have lost control, just managing the days as they go by and waiting for the vaccine to save them:

“We are surviving and we are only waiting for the vaccine. Iyon lang man talaga ang ano ko. When you talk COVID, what about COVID? It’s vaccine. Wala tayong pag-usapan diyan na… Unless the vaccine is there available and effective, the efficacy is proven, then we can really say that we are moving as far as we are… If I were to try to answer a question of how fast it is developing, wala, the dynamics is that we are in still waters. Hindi naman tayo barko na ano, but we are in still waters with the engine conked out. And that is what we have unless the vaccine is there and for as long as human beings continue to relate to each other, wala tayong magawa at hindi natin makulong ang Pilipino eh.”

Department of Interior and Local Government (DILG) Sec. Eduardo Año also vaunted the crime rate reduction from 172 cases a day to 92 since the lockdown in March, also flaunting this as an achievement of the lockdown, and credited the ”visibility, ang beat patrols, ang pag-coordinate sa LGUs, barangays at community, at ang mabilis na reaction time” that should be maintained.

Very candidly, Duterte also talked of his “rapport” (the very word he used) with the Ombudsman, to continue the “pakikisama” (a known Filipino virtue, usually positive) with the Ombudsman. The Office of the Ombudsman independently monitors all three agencies—executive, legislative and judiciary—for political corruption, despite the Ombudsman being a presidential appointee.

Año, in his report on the government officials they charged in the Ombudsman, reminded Duterte of the Ombudsman.

Duterte said, “Secretary Año, if you would — if you would notice the fact that at no other time ‘yung rapport ng Ombudsman pati Executive department maganda ang pagsamahan and it’s because of a — it’s a matter of human relations ‘yan. How you present the problem and try to ask his help.”

He praised the Ombudsman in helping in the investigation of the PhilHealth.

Duterte said, “But this itong sa PhilHealth iba ito kasi interesado ang gobyerno eh. And of course, as I have said, I’d like to commend the — it’s a very commendable act of the Ombudsman in trying to go out and help. Iyan ang isang nakuha lang natin, thanks to you. Mahirap. I do not even know him. I do not know him pero kung ganoon ang nakuha mong reception sa kanya, wala ‘yan. It’s a matter of human niceties.”

This was really curious at a time the current Ombudsman ordered to limit the release of Statement of Assets and Liabilities (SALN) of public officials, justifying that these were being ‘weaponized against officials.’ Duterte appointed Samuel Martires as Ombudsman on March 2, 2017.

This is also a big setback and exacerbating the lack of an enabling law for freedom of information even if right to information is enshrined in the 1987 Philippine Constitution.

The filing of SALN is required under Republic Act No. 6713 or the Code of Conduct and Ethical Standards for Public Officials and Employees. It also mandates that the public shall be entitled to even a photocopy of the SALN of public officials or employees with certain conditions.

President Duterte made two announcements: the extension of the state of calamity throughout the Philippines due to COVID-19 until September 12, 2021. Like a prelude of things not getting solved soon. The other order is for health workers who have perfected contracts until August 31 would be allowed to leave—that’s just 1,000+ of them and the Filipino Nurses’ United said there are 200,000 unemployed nurses. Duterte urged the health workers “to serve the Filipino people because we also need help and we have a crisis also to deal with.”

Towards the closing of the meeting, Duterte expressed his anger to the drug pushers and the New People’s Army (NPA). We have not heard him rant against the NPA in a while.

This is a mouthful when there is not even a vaccine yet and he is just waiting for other countries to produce it and loan it to us.

But the highest recipient of Duterte’s anger are the “dilawans”, especially Vice President Leni Roobredo. Along with his praise on Sec. Cimatu at the opening of the meeting, heinserted his first attack against the “dilawan.”

Duterte said the government is doing the “best” it can do. Duterte accused the “dilawan” of “trying to delude people,” possibly against this claim.

“Sabi ko nga sa inyo noon eh COVID-vaccine. Now, you might be hearing of critics and ‘yung walang magawa, that we are not doing enough. Ano mang enough na gusto ninyo? May ospital, may kama, at may punerarya. Nandiyan lahat.  Ano man…? Wala man tayong… Mag — nag — saan… Ano pa man ang gusto ninyo? The microbes — the virus is flying around that is why you still have to wear the mask,” he said.

There were hospitals, bed and funeral parlors even where there was no COVID-19 pandemic. This is a pandemic and not just the “basics” of getting sick and dying were needed.

Robredo defended in public about her criticism of government’s action in fighting COVID-19. Robredo’s statement has added to the voices of the Churches and the struggling people that the Duterte regime has not been in the right tract of responding the pandemic.

The six months suffering of the people is basically caused by the regime’s militarist solution to COVID 19.

Six months is enough for the government that had “done enough” and the people are also shouting, “Enough!”

Enough to the incapability and inutility of the fascist government to lead the people in the right path against the pandemic. Yes, enough to this corrupt, fascist, plunderer and traitor regime.

No to Popularity, No to Dynasty

On the removal of ‘subversive’ books