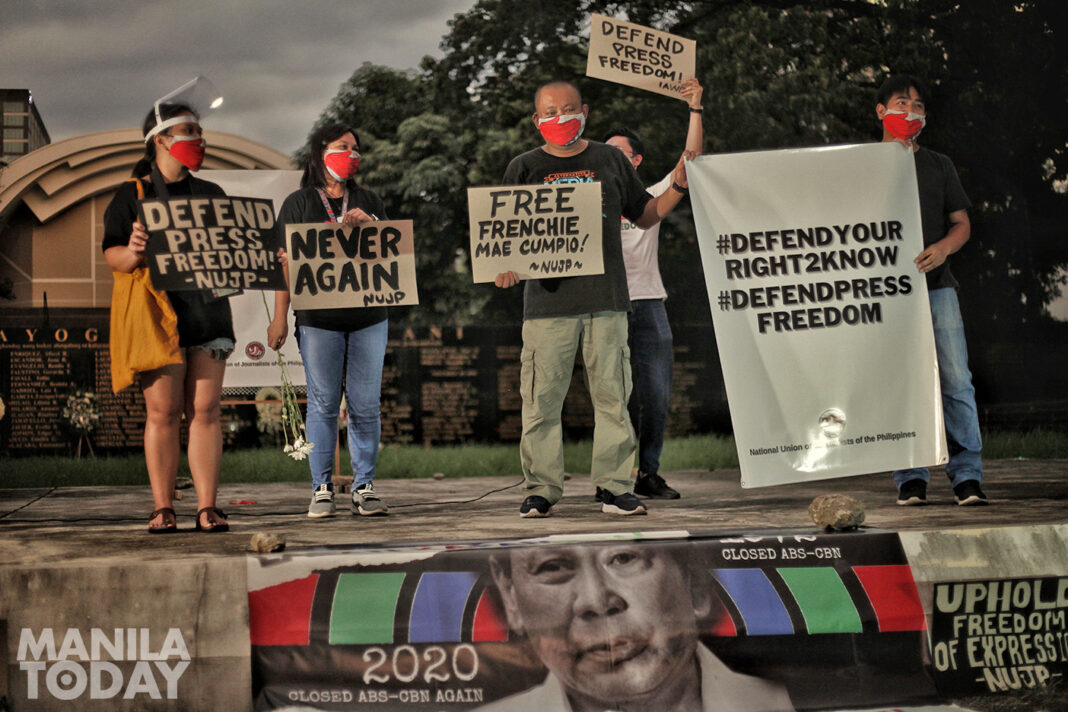 Several media groups participated in the launch of “Masked Media” led by National Union of Journalist of the Philippines (NUJP) at the Bantayog ng mga Bayani, happening at the same time with the martial law protest at UP Diliman on September 21.

[We chose this day despite the many stories we need to cover today, we chose this place not only because this is the only one available.]

Almost five decades, or 48 years to be exact, since the declaration of Martial law where thousands of activists and journalists have been imprisoned, disappeared or killed. Thus, a shrine dedicated to the fallen victims was established to recognize their deeds and contribution to the ouster of the dictatorial regime of Ferdinand Marcos.

[We are not here to just remember them. We are here because today is similar to their time.]

Villanueva and other journalists pointed out the similarity of Marcos dictatorship and the current administration with regard to the rampant human rights violation, including the assault on press freedom.

According to a report from NUJP and Center for Media Freedom Responsibility (CMFR), the attacks and threats against press community have skyrocketed with 171 reported incidents since June 30, 2016 to April 30, 2020.

[Journalists then who exposed human rights violations like massacres under Marcos were branded as subversives. Aside from the subversive and flirting with communists tag, he said that media only report on those issues to undermine government. We hear such things today.]

Olea also reasoned that the incident of media shutdown with only the crony press at work in times of the Martial law is indifferent from the suppression of the press during the administration of President Duterte.

[In the time of Duterte, ABS-CBN was again closed down, Rappler was charged with several cases, website of alternative media outfits were attacked, journalists exposing the truth were jailed.]

Cumpio is a community journalist whose beats are focused primarily on the situation of farmers and on human rights violations in Eastern Visayas region. Her media outfit’s office was raided in February, and she was arrested and detained on the charges of illegal possession of firearms and explosives, that various groups assailed as “planted evidence.”

[This is how severe these fabricated cases against journalists were. These are reflections of grave repression and we openly say that under Duterte, there is new tyranny, new dictatorship. Even if there was no declared martial law, the terror law was passed and telling truth is being criminalized, even our work to interview various groups and sectors in society.]

On the other hand, Villanueva and Olea reminded their fellow journalists on the historical and vital role of the media in the likes of freedom of expression heroes Liliosa Hilao, Emmanuel Lacaba, and Lorena Barros, among the 16 writers and journalists killed during the Marcos dictatorship.

[Our work is to continue to expose the truth. Even if they call us terrorists for doing so, or whatever they want to label us. we need to stand with the people to fight for the truth.]

Olea further mentioned that journalists must remain vigilant and never be deceived with the “rhetoric” of the current administration alongside its cronies and troll armies.

[History continues and our ranks prove that as long as there is an oppressor, Filipino journalists will fight.]

[In the darkest days of history, journalists are among those who stood not only for freedom of expression but on all our human rights. Our human rights is part of the struggle for human rights and social justice.]

At the end of the program, journalists lit candles and offered flowers to the tomb of the names of media veterans who fought during the martial law period.