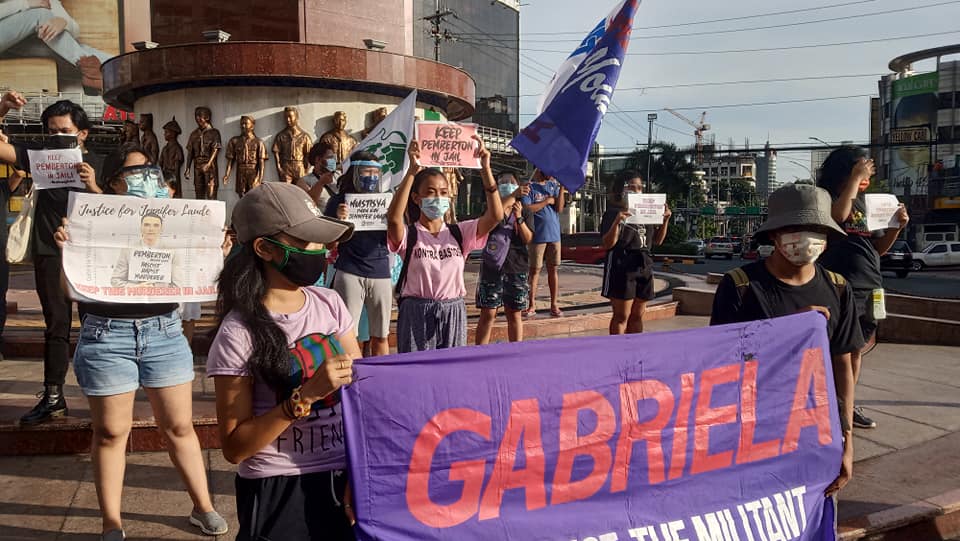 On September 8, a lightning rally was initiated by progressive groups in Boy Scout Circle at Tomas Morato, Quezon City carrying calls such as “Justice for Jennifer”, “Junk VFA”, and “Oust Duterte” after President Rodrigo Duterte announced yesterday that he is giving Cpl. Joseph Scott Pemberton an ‘absolute pardon.’

[Jennifer Laude is killed repeatedly. From the onset, she was killed by Joseph Scott Pemberton; and now, she is killed by Duterte to serve the interest of foreign powers.]

“Duterte, Philippine president gave full pardon to release US Navy, a vicious murderer of a Filipino transgender woman. This has shown us the act of transphobic state leader and it is an insult to us all,” ASEAN SOGIE Caucus said on the absolute pardon of Pemberton.

The organization emphasized that the issue is a reminder for human rights bodies of the regions “to act against malice and discrimination toward LGBTIQ that happen on national level, no matter how seemingly microscopic.”

Queers Resisting Tyranny also expressed indignation to the government who then claimed and later withdrew its decision to abolish the Visiting Forces Agreement (VFA) which resulted in the rampant human rights abuses in the country, among of which is Laude’s case.

“It is clear that justice for Jennifer will continue to be denied for as long as the Visiting Forces Agreement, which Pemberton weaponized to the greatest extent to absolve himself, is upheld,” the group said in their press statement.

“We believe that the release of Pemberton does not end with robbing justice from Jennifer Laude but serves as pretext for Duterte to deny justice from us just so he could please the US and will allow him to continue favoring imperialist powers instead of prioritizing the welfare of his people. Even more, as the USC stands with the various marginalized sectors, we strongly believe that Duterte’s pardon and release of Pemberton is a direct assault on the LGBTQ+ community,” said University of the Philippines Manila – University Student Council.