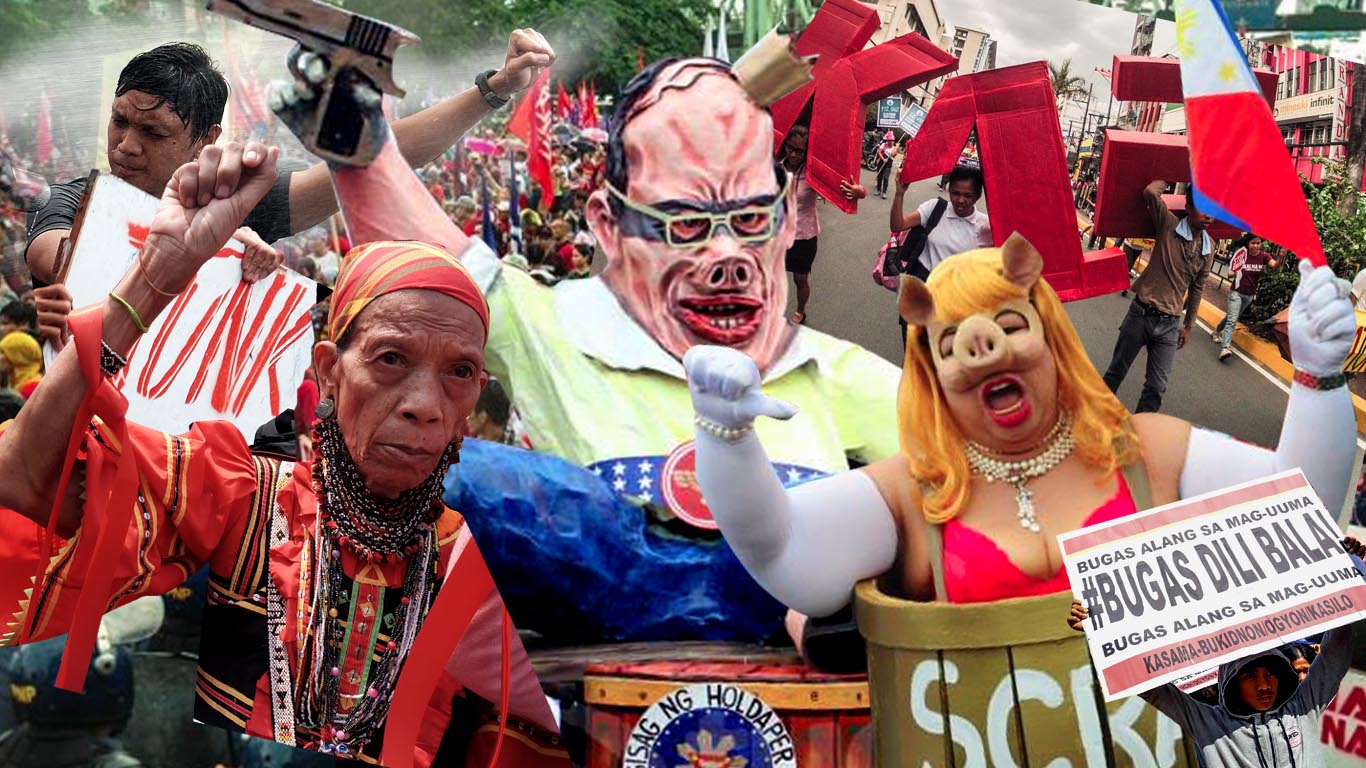 These protests unmasked the ‘Daang Matuwid’ program as an empty slogan of a regime that insidiously perpetuates foreign dominance and elite oppression in the country. It is only now we appreciate the full and potent significance of these grassroots protests. If not for these daring political actions, Aquino would have easily fooled many into believing that he performed well as president.

Despite the demonization of dissent in the country, protesters persevered in asserting their democratic rights. They showed creativity too through events like One Billion Rising and innovations like selfie and even planking protests. In Mindanao, the funeral march for a revolutionary leader became a political event that criticized the government’s counter-insurgency program.

But the most impressive example of political activism was the brave decision of the Lumad who defied state-sponsored violence and corporate plunder in their communities. Together with farmers struggling against climate injustice, these rural heroes became the fiercest and most credible critics of the Aquino regime.

An impressive massive gathering of citizens in Luneta which forced the government to abolish the notorious Priority Development Assistance Fund or pork barrel system in Congress. Outstanding example of an online initiative which led to a powerful political action in the offline world. The anti-pork movement became broader as it waged war against other forms of PDAF in the bureaucracy. Aquino ran on an anti-corruption platform but he would step down as a leader who implemented an unconstitutional presidential pork program and had the largest pork barrel among all presidents. Hence, the tag ‘pork barrel king’.

Thousands marched in Samar and Leyte (also in Estancia, Iloilo) in 2014 and 2015 to protest the government’s failure to provide immediate and just assistance to victims of supertyphoon Yolanda that struck in 2013. Various community assemblies were held in the region before marching in town centers and symbolically converging in San Juanico Bridge. Solidarity protests were organized by Waray groups and concerned citizens across the country. People Surge gave voice to calamity survivors who were neglected by the national government. After Yolanda, the world was quick to give aid but the Aquino government did not distribute these funds properly. Aquino would be known as the president who bungled the rescue, recovery, and rehabilitation efforts in the aftermath of Yolanda. A true disaster king.

Mindanao’s southern region was badly damaged by typhoon Pablo in 2012. After months of waiting for the government to deliver its promise of livelihood assistance, thousands of farmers stormed the warehouse of the Department of Social Welfare and Development in Davao. Then they distributed sacks of rice and sardine packs to fellow protesters. For DSWD officials, it was an act of looting. But for Barug Katawhan, it was a collective action of typhoon victims in protest against the government’s slow response to the urgent plea for relief by typhoon victims.

Because of the El Niño weather phenomenon, a state of calamity has been declared in several provinces of Mindanao. This means local officials are authorized to use special funds in order to provide assistance to affected residents. But food aid did not arrive in many towns forcing farmers to stage provocative protests like establishing road blockades and barricades. The protest of North Cotabato farmers was violently dispersed which instantly became the symbol of the rural poor struggling against feudal exploitation and state brutality. Similar protests were held in Bukidnon and South Cotabato but the local agencies in these provinces were able to resolve the issue by releasing sacks of rice and seedlings to the farmers.

Students, teachers, and administrators of ALL state universities and colleges conducted a nationwide campus strike in protest against the budget cuts in the higher education sector. The historic action in 2010 reflected the destructive legacy of the neoliberal dogma in policymaking. Even essential services like education and health were subjected to privatization schemes and reduced public subsidies. The campus strike rallied other sectors in society to question the budget priorities of the state. The following year, campus protests were organized again to call for a higher education budget. Some students went on to ‘occupy’ Mendiola by camping near the presidential gate.

Several municipalities and provinces across the country, especially in Luzon, were able to block the entry of mining companies by holding ‘People Power’ assemblies. These protests, though far from the country’s capital, highlighted the growing people’s resistance against large-scale mining operations. Aquino issued an executive order which barred local governments from passing laws that contravene the national government’s mining policies. He also authorized mining firms to secure the services of the military and paramilitary groups that exacerbated the militarization problem in the countryside. Despite the pro-mining bias of the president and many local politicians, it did not stop the people from condemning the dirty impact of the extractive industry on the country’s environment, economy, and politics.

Displaced from their villages because of militarization, thousands of Lumad tribes from CARAGA and Davao regions sought shelter in city centers. Some of them arrived in Manila to give testimony on how the government is destroying the way of life of our indigenous peoples. Lumad leaders were reportedly harassed and killed because of the various tribes’ refusal to allow logging and mining activities in their communities. The Manilakbayan protest in 2015 garnered broad support from various institutions and personalities in Metro Manila. The campaign also called for the reopening of Lumad schools that have either been occupied or destroyed by state troops.

The fish ban on municipal waters provoked fish operators and their workers to organize a series of nationally-coordinated protests. The fish holiday succeeded in generating public discussion about the amendments to the Fisheries Code that included restrictions in fishing in municipal waters for subsistence and distance demarcations for commercial fishing. These restrictions effectively hurt, if not kill, the livelihood of small fishers and other local producers. It is purportedly a necessary measure to preserve marine resources but fish operators believe it is a knee-jerk reaction of authorities to the decision of the European Union to downgrade the trade rating of the Philippines. If fishers cannot fish, where would we get our daily fish supply? Instead of protecting local businesses, the government once again promoted the economic interest of other countries. In Metro Manila, the fish holiday closed off parts of the Navotas Fish Port and the fishers’ protest march to the presidential palace numbered to thousands.

Students, teachers, and parents launched different forms of protests against the hasty implementation of the poorly designed K-12 education reform. Thousands joined rallies in front of the Supreme Court and near Malacañang Palace to call for the junking of the program. Among the most consistent were teachers deploring the removal of Filipino and History subjects in the curriculum. The campaign is not yet over since many groups are challenging the new president to review the program and allow high school students to graduate. A big protest is also being readied in time for the opening of the new school year in the coming weeks.

The police tried but failed to stop protesters from getting near Pasay, the venue of the 2015 summit of the Asia-Pacific Economic Cooperation. The protest gathered many sectors including the Lumad from Mindanao, anti-mining advocates from the ‘Defend the North’ network, and anti-globalization activists from other countries. The APEC summit hosted by the Philippines inconvenienced thousands of Metro Manila residents but its bigger crime was the further imposition of unjust and onerous trade and economic policies.

If there is something good to say about the 6-year presidency of Noynoy Aquino, it is the joining together of nameless change workers, unsung heroes to protest the epic incompetence and insensitivity of the ruling Liberal Party. Aquino’s abhorrent leadership inspired the people to organize and mount massive demonstrations across the country.