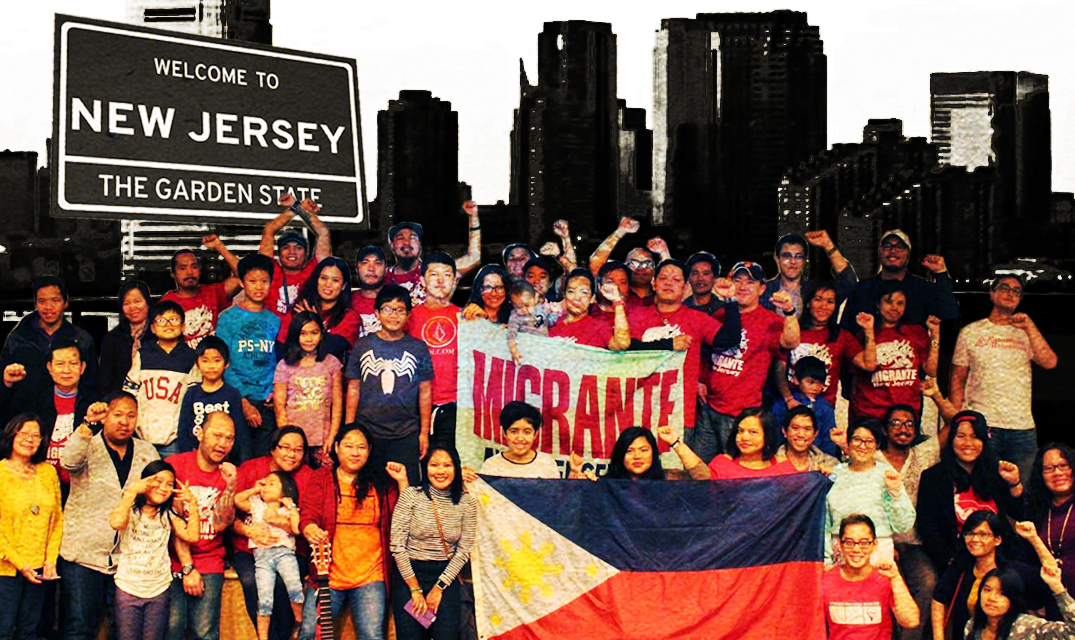 Ako po si Cecil Delgado, a mother of a fourteen year old young man, a migrant worker and a part of Florida 15, a human trafficking survivor.

A week ago, I was asked by Yves Nibungco to first share our story for the nth time and second, why I decided to be a part of Migrante NJ. And just like the old times, I was hesitant to do this. I don’t know if I’m scared that I may say things that people wouldn’t understand or maybe I’m scared that i may fail to deliver the message. But then I remember, it was around 2007, in front of 10 corporate officers and almost 200 crew members from different countries, when I put my employment at risk, by standing up, asking questions and speaking for others. I decided to stand up and throw questions to those [corporate] officers, for those 200 crew members who didn’t have the courage to speak for themselves. Questions that I never thought would be their reason to send me home, questions that I never thought would be their reason to end my career as a Seafarer.

The company decided to send me home because they said that I was a threat. Ako daw po ay isang banta, that I am an activist. At first, I wasn’t sure about that, but I was sure of one thing. That I stood up and fought for what I know was right! I may not be a radical activist, but I know, I am an activist by heart.

And that is the reason why I am standing in front of you. Because I don’t know if by telling my story or our story, I would be able to inspire and encourage others to come out and expose themselves and seek justice. I’m hoping that by sharing a brief summary of our story, people will be inspired and encouraged, just as how Leticia Moratal and Jackie Aguirre’s story inspired us. For nothing is more powerful than a real testimony of a survivor from being a victim.

As I was saying, aside from working in different hotels and high-end restaurants in the Philippines, I was a seafarer before. I ventured in sea-based employment because aside from earning Euros, I also get to visit different countries. Unfortunately, that journey ended after four years.

I was looking for an employment opportunity, when a friend of mine encouraged me to apply to an agency in Manila. After only a month of processing, I was hired to work as a waitress. March 2008 when I first set my feet in Miami, Florida. In short, it was 2008, when I migrated.

I personally decided to migrate simply because and what everybody says “we want a better future for our family,” a future that my country doesn’t offer and a future that you can’t find in the Philippines.

My intention was only to work, earn and save, but I ended up being a human trafficking victim or a victim of unfair labor practices. I personally couldn’t believe that I can be a victim of such a thing, because when I was applying for the job, everything seemed legit, fair and legal. Complete trainings, paper works, and documents from the United States were handed to me. I also didn’t know that labor “trafficking” word has ever existed.

It was only after three years when I resigned as an Executive Assistant of Jose Villanueva, a Filipino employer who owned SanVilla Ship, who took us from the Philippines and brought here, that human trafficking is really happening here in the United States. Because before, whenever I hear “human trafficking,” I always thought about “sex slaves,” hindi po pala. I was wrong.

I personally never worked as a full time waitress. Rather, I worked as a 24/7 Executive Assistant, and being his Executive Assistant, I would say, I witnessed everything – payroll discrepancies, tax fraud, visa fraud, forced labor, unauthorized deductions, etc. I was also forced to multi task and maximize my time to minimize my loads. I was working 60 to 70 hours/wk, no overtime pay, I was paid less, managing almost a hundred employees and attending to their needs, meeting clients here and there, scouting, driving, payroll, etc. You name it all! I did it all by myself.

That’s why, it was easy for me to seek Atty. Vinluan’s advice through the endorsement of the National Alliance for Filipino Concerns (NAFCON), and he validated that our employer violated so much of my rights and that I was a human trafficking victim together with fourteen others. Our case ran from 2011 to 2014, and the government has only helped us once. We never got any legal assistance from them for our lawyer. They gave us $300 each as their initial help for their citizens in distress and I’m telling you, that was the last too. They even tried to get rid of us by offering us to be sent back to the Philippines in which we all refused.

2011 when we filed our case against our former employer. February 2013 when we received our T-visas and employment cards. 2014 when we started filing the petition for our families. 2015 when some of the F15 members got reunited with their families. And just last September 2015, I got reunited with my son. A son that I did not see in almost 7 years; a son that I did not see playing basketball or soccer, a son that I never see competing in swimming and won medals; a son that was so innocent in anything and is now eminently engage in everything; a son that I begged to have but had to leave.

I couldn’t explain how I felt when I was at the airport, waiting for him to come out, and saw him walking towards me. I wasn’t sure if I was excited or scared. Excited because finally we will be together or scared because he may not recognize me. As he was getting closer, the only thing I felt that I had to do, was to hug and kiss him, because he’s my son anyway. He would feel every beat of my heart. But then I was right, after hours of talking, my son told me, he barely recognized me. He didn’t recognize my face and my hair.

That “honesty” hurt me for a little bit, but it didn’t break me. Reuniting with my son is still the best feeling! My son is my reason why I remained strong. There’s a saying and it goes” A woman became stronger because of the pain she has faced and won”.

Labor export policy separated us but fighting the system brought us back together.

A family member once asked me if working abroad is easy or hard. Some may say easy, some may say hard. But the answer will always depend on one’s current situation. Let’s just say it’s both easy and hard. Easy because you are earning more than what you can earn in your country. Easy because you can buy what you want whenever you want it and easy because you can visit different places and meet new friends along the way. On the other hand, it’s hard because aside from being away from your family for an indefinite period of time, you are at the same time putting your life in danger or putting your future at risk!

Sometimes, a death or loss of a family member, having a broken family and separation of husband and wife are becoming a part of the “unwritten contract” as a migrant worker. Being in another country is always a gamble. Almost like playing a card game. Magkamali ka ng balasa, next thing you know, ikaw na ung nasa kahon. Minsan masarap din maging migrante dahil madalas we send balikbayan boxes for our families, pero minsan nakakatakot din, dahil minsan ang migrante na mismo ang laman ng box (One mistake, next thing you know you’re already the one inside the box. Sometimes it also feels good to be a migrant because most of the time we send balikbayan boxes, but sometimes it’s also scary, because sometimes migrants themselves are the ones inside the box). Just like what happened to many of our fellow kababayan in Middle East or different parts of the world.

It gets more difficult from a mother, migrant worker and victim’s point of view, is when you fight your battle without seeing your Government in the equation. These government representatives always forget the fact that the reason why they are here is to first, protect the migrant workers, to ensure that we are safe, to ensure that we are getting the assistance and help that we may be needing and most importantly, to ensure na tayo po ay makakabalik pa ng buhay sa bansang ating pinanggalingan (that we can return alive in the country where we came from). Migrant workers safety should be their top priority. Sending our ashes back to our country or sending our dead and cold bodies back to our families is the most painful price that migrant workers have to pay most of the times.

We, the Florida 15, would not be where we are now if it were not because of these community organizations and our lawyer who never cease to support us, if it wasn’t because we decided to engage ourselves with them, if it wasn’t because we decided to be united, maybe until now we are still hiding and waiting for nothing. Our collective effort and our decision to put our actions together brought us to where we are now. Brought us to be with our families. Brought us to be free and fearless. Brought us to stand up in front of you and tell you that, you, migrants are not alone. That all Migrants could make a difference and be a part of change!

Everyday, we are facing unseen battles. Don’t step back. Move forward and always think of the basic, that in fighting a battle you either win or lose. What’s important is, you tried and chose to stand up and fight for your rights. And this is why I joined Migrante New Jersey. As long as there are victims, we, the organizations should stand still. As long as there are people that are getting abused, in any other way, we should remain, and when everything gets fixed, we should still watch. And this is what this organization does. Migrante will stay, stand, support, educate, and fight with you. Let’s all contribute, build and mobilize.

To all the Migrant Workers out there, times have molded us. We have had enough pain and sufferings. This is the time that we need to put our actions together. This may not be an easy path, but things always get better if we are all together.

Cecil Delgado is currently the Deputy Secretary General of Migrante New Jersey, formerly known as the Filipino Immigrants & Workers Organizing Project (FIWOP), aims to educate, organize and mobilize Filipino im/migrants and their families to protect and advance our rights.

Of Courage and Cowardice