Home CULTURE U2, Bono’s politics – saying and singing the things we need to... 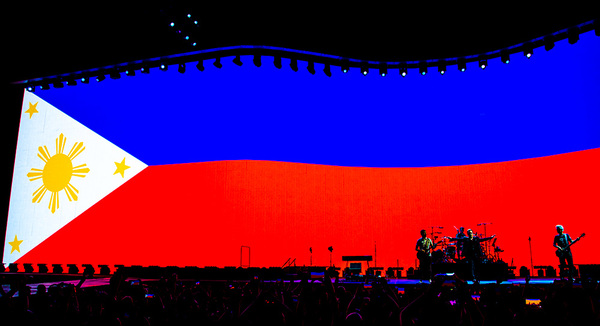 U2’s The Joshua Tree Tour 2019 leg in Manila is over, but the pouring of reactions is not.

This is to be expected, with U2 being one of the longest-staying music greats, with a career spanning 43 years, and the band members owing their longevity to having a ‘band ego’ instead of individual musician’s egos. They were ranked 22nd at Rolling Stone’s Greatest Artists of All Time and inducted to the Rock and Roll Hall of Fame, a museum in Cleveland, Ohio, in 2005.

This was the first time the band ever played in the country and the penultimate leg of their tour that started in May 2017 and ends in Mumbai, India on December 15. There were an estimated 45,000 to 50,000 Filipino fans who flocked to the Philippine Arena, north of Manila, to witness the band play 25 of their songs in a two-and-a-half-hour spectacle.

At the same time and region, the closing ceremony of the 30th South East Asian Games happened and was attended by around 20,000. Equally magnificent is the closing ceremony where the Philippines, as host, won overall champion among 11 countries with 387 medals (149 gold) in 530 events in 56 sports and was graced by Journey frontman and Filipino pride Ariel Pineda and a mini-concert by international music star Black Eyed Peas. But, we digress.

U2 is wildly successful, wildly popular and despite ticket prices going as high as P20,000, the stadium was full. Social media is full of photos, live videos and video clips of the concert, as well as reactions, both happy and angry.

Why also angry? Because despite U2’s popularity and being outspoken about their advocacies and reflecting these in many of their songs much of their career, there were those who came to watch (or those who reacted to these posts) who were unaware of the band’s politics. There were also those who criticized the band (those who watched and even those who didn’t) for crossing the line to politics, “giving unsolicited opinion” when they should have stayed within their music and “just sing.”

Many observed or concluded these critics to be President Duterte’s supporters or a ‘DDS’ (diehard Duterte supporter). Or, they may be ordinary citizens uninformed of U2’s legacy in music and politics.

Veteran journalist Inday Espina-Varona’s post on Facebook as reaction to U2’s critics after their Manila concert encapsulates what these new haters need to contend:

“To everyone screaming that U2 and all other artists should have stayed off politics and just focused on the music… Hello, do you know U2? Have you really listened to their songs? Many of the musical greats — Nina Simone; the Beatles, Peter, Paul and Mary; Bob Dylan; Sting; even MJ — have said their art flows from the personal AND the political. Most times, they don’t distinguish one from the other. Art is one of the highest forms of expression, personal AND collective.”

Despite the flak, and now that we’re talking about it, U2’s show of politics in Manila concert is just the reflective moment we need heading towards the end of the year.

‘Only took us four decades to get here’

And it was worth the wait.

With Bono saying at the end of the show they should have played in the Philippines every year, it was safe to say they loved playing for the Filipino audience.

The concert opened to the song ‘Sunday Bloody Sunday’ which many have as the band’s most political song. The lyrics of the song reference the Bloody Sunday event on January 30, 1972, when British Soldiers shot 28 unarmed civilians who were peacefully protesting against Operation Demetrius in Derry, Northern Ireland. The event inspired John Lennon’s own ‘Sunday Bloody Sunday’ song and was the first one to address the event.

The lyrics of the song that seem to have a timeless message include this part: And it’s true we are immune/ When fact is fiction and TV reality/ And today the millions cry/ We eat and drink while tomorrow they die/ the real battle just begun/(Sunday, Bloody Sunday) to claim the victory Jesus won.

When hearing the phrase ‘mothers of the disappeared,’ what usually comes to mind is the image of the mothers of missing University of the Philippines students and activists Karen Empeño and Sherlyn Cadapan, as well as the mother of agriculturist Jonas Burgos.

Concepcion Empeño, Erlinda Cadapan and Edita Burgos continue their fervent 13-year search for their children and for justice.

The song is also very timely because of one recent case of enforced disappearance. Honey Mae “Hanimay” Suazo, former Karapatan Southern Mindanao secretary general, was reported missing since November 2. Suazo previously complained of experiencing harrassment and surveillance by alleged elements of the military. Also in April this year, Maj. Gen. Antonio Parlade Jr., Deputy Chief-of-Staff for Civil-Military Operations of the Armed Forces of the Philippines (AFP), accused Suazo of supposedly being a member of a communist front organization.

U2 performed the song during the Popmart Tour in Santiago, Chile on February 11, 1998 with actual mothers of the disappeared on stage with the band. Bono let them utter the names of their loved ones during the song. Haunting, right?

The part that got very controversial—especially on social media—was during the performance of ‘Ultra Violet (Light My Way)’, part of the encore set list.

They were shown in the company of other women in history who fought for women’s rights, and human rights and freedom in general—the Suffragettes, Greta Thunberg, women of Iceland, Rosetta Tharpe, and Ruth Sienkiewicz-Mercer among others.

Rappler CEO Maria Ressa, now one of Duterte’s most well-known adversaries after his singling her and her media outfit Rappler out so many times, was given a few special mentions.

“Women who light up history, your own Maria Ressa, is an incredible woman. But the extraordinary thing is, even Maria will say it’s not about individuals. It’s about collective action. It’s about social movements. And so then all of you can grow up to be the President or Maria Ressa,” Bono even said after the performance.

This must have irked the president’s supporters further, even if they could have looked past the giant LED screens.

U2 asked concertgoers to include women, volunteers and activists in their prayers. As we all know now, journalists and activists are not very popular with Duterte as well. But U2 recognized them, just a day after International Human Rights Day and just eight days away from the announcement of the verdict on the Ampatuan massacre case, known as the single deadliest event for journalists in history.

The concert was free for Red Cross volunteers who attended.

“So many heroes in the house tonight, including 100 Red Cross volunteers, part of the response to the recent Typhoon Kammuri… The Red Cross volunteers… let’s keep them in our prayers, the ones who keep us safe from physical harm, also for the journalists, for truth tellers, activists, who keep this country spiritually safe… everyday heroes all, women and men, let’s see your stars in the sky Manila…” said U2 frontman Bono.

It takes a lot of guts to speak out for human rights and for human rights defenders now in the country in these times of fake news, disinformation and trolling online and systematic human rights violations offline. But it must not have been guts that led Bono and U2 to it—they were actually just being consistent, doing that all throughout the tour, all these years when it comes to those songs. And that probably takes sincerity and will. Coupled with a lot of creativity in the show, the music, the showmanship–it was food for the soul. And for newbies to these issues, it now looked like attending a U2 concert is not just an enjoyable experience, but also an educational, if not uplifting one.

The Joshua tree, from which the 1987 album and 2017 and 2019 tours were named, was used for its quality of growing in fiercely adverse conditions and was seen as a symbol of faith and hope amid aridity. The tree was said to have been named after the Old Testament prophet Joshua, as its branches were likened to Joshua raising his arms to pray.

Other quotes to remember U2 in Manila

On December 10, International Human Rights Day, at a press conference after the launch of drone blood delivery service Zipline, known philanthropist and activist Bono remarked of the service:

“Where you live should never decide whether you live, and that’s why we’re here.”

He could have been talking about the right to life in general.

Bono was also asked about his thoughts on the human rights situation in the country at the same event.

“You can’t compromise on human rights.”

“My impression of the Philippines is [that it has] very caring, very sophisticated people. I understand that when progress is made, sometimes people make what they think are compromises for that progress. And I would just say, you can’t compromise on human rights. That’s my soft message to President Duterte,” said Bono, a member of Amnesty International (AI).

Asked about AI’s concern on human rights in the country under Duterte and whether they will be meeting with the president, Bono responded:

“President Duterte is very popular, he doesn’t need me on his side, and as it happens I have a very deep conviction about journalism. I probably would have been a journalist if I wasn’t a singer and so the safety of journalists is very important, and I think a democracy requires a free press.”

At the concert, a led screen showed a script that included the line:

“Injustice anywhere is a threat to justice everywhere.”

U2 did not have to say a lot; they only had to play their songs. Powerful songs like “Sunday Bloody Sunday”, “Pride (In the Name of Love)”, ‘Ultra Violet (Light My Way)”, New Year’s Day,” “Bullet the Blue Sky”, etc. where the strength of their belief in their advocacies was magnified and immortalized in these songs, for existing as well as for being played. And these songs and their messages, for 30 years and counting, will live on.

While U2 was here to play, they unexpectedly opened a forum for us to examine and validate our own humanitarian instincts and beliefs.

So, why will we not love their music (it is really good), if we believe in upholding human rights, women’s rights, free press, democracy and justice that they espoused?