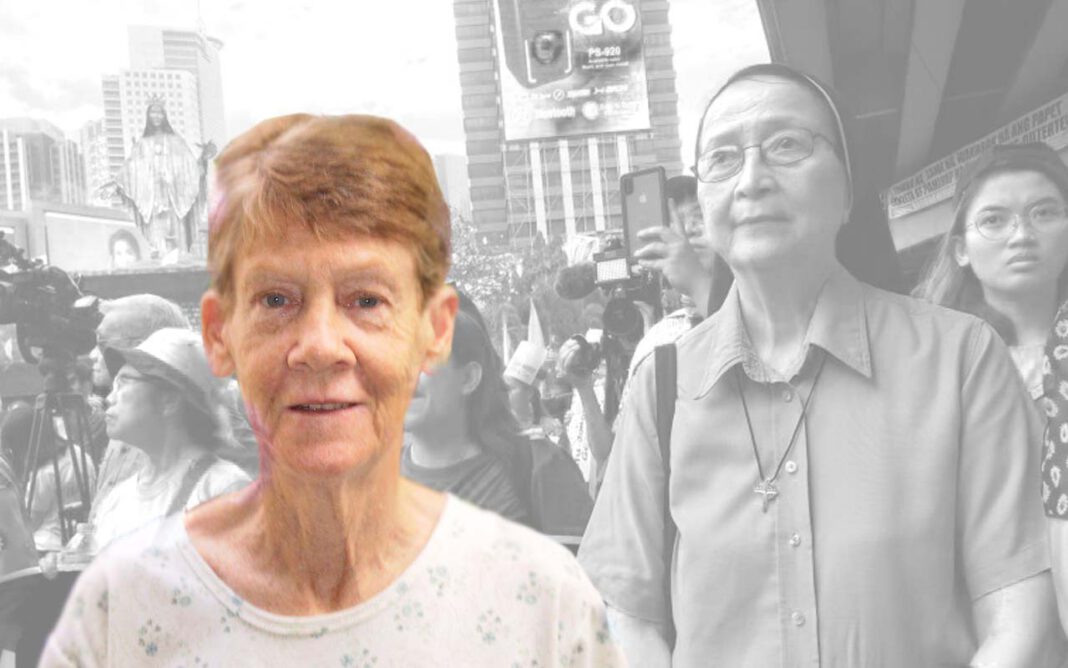 Fox lamented how the government has chosen to pursue a case against Belardo instead of honoring her for her commitment in serving those oppressed and marginalized in rural areas.

“She has done this in faithfulness to her commitment to serve the least as a Sister of the Good Shepherd. Rather than being awarded for her commitment over so many years, a government which reveals itself every day as a government for the rich and powerful, now has the audacity to use the law as a weapon against this elderly religious sister,” said Fox.

Describing Belardo as a “long-time worker to improve the lot of the peasants,” the Australian missionary said that the embattled nun has “tirelessly advocated on their behalf.”

Backing Belardo and RMP’s tireless commitment in service, Fox said, “I have worked with Sr. Elen in the Rural Missionaries of the Philippines. Again, this is an organization which had tried to improve the lot of the peasants since 1969.”

The Quezon City Prosecutors’ Office in a decision on November 8 indicted Sister (Sr.) Elenita Belardo for perjury for claiming the petition filed against President Rodrigo Duterte and others that the Rural Missionaries of the Philippines Inc. (RMP) is a duly registered non-stock, non-profit organization. Complainants duly identify themselves and their organizations in the course of executing their complaints and affidavits. Belardo is the former national coordinator of the RMP.

RMP’s certificate of registration was found to have been revoked effective September 29, 2003. That Belardo was aware of this provided for the probable cause for trial for perjury as penalized by Article 183 of the Revised Penal Code, according to Senior Assistant City Prosecutor Nilo A. Peñaflor.

Karapatan said Fox herself was targeted by President Rodrigo Duterte’s government for her active involvement in issues of human rights.

Fox was taken from her house in April 2018 and was detained at the immigration bureau in Manila for almost 24 hours. She was then the coordinator of a Philippine congregation of Catholic nuns called Notre Dame de Sion.

She immersed herself in missionary work in the Philippines for 27 years, already an eloquent speaker of the Filipino language, until the government downgraded her missionary visa to a one-month tourist visa and did not approve further applications from Fox and her lawyers. She was forced to leave the country in November 2018.

Duterte ranted about then 71-year old Fox in a speech. He claimed that Fox made remarks critical about the government and that these remarks constitute a “violation of sovereignty,” for which she deserves to be barred entry from the country.

“Huwag mo papasukin kasi walang hiya ang bunganga ng madre na ‘yan… Ikaw madre (You nun), why don’t you criticize your own government, the way you handled the refugees hungry and dying, and you turned them back to the open sea? Bakit hindi ka magyakyak doon? Buti dito kriminal ang pinapatay ko, kayo?” Duterte said in a speech at the Armed Forces of the Philippines change of command ceremony in Camp Aguinaldo on April 18, 2018.

[Don’t let her in because that nun’s mouth has no shame. You nun, why don’t you criticize your own government, the way you handled the refugees hungry and dying, and you turned them back to the open sea? Why don’t you rant there? At least it is criminals I order killed, how about you?]

In the same speech, Duterte took full responsibility for the arrest and detention of Fox in April last year.

Fox was said to have angered Duterte by her joining a fact-finding mission to investigate alleged abuses against farmers, including extrajudicial killings and evictions perpetrated by government soldiers in Mindanao.

National Security Adviser Hermogenes Esperon was named as respondent in the petition for writ of amparo (protection) and habeas data filed to the Supreme Court by rights group Karapatan, women’s group Gabriela, and RMP in May this year, but the case was referred to the Court of Appeals. The groups said they were “constantly threatened and harassed, red-tagged and maliciously terrorist-labeled only because of their advocacies in various fields of human rights work.”

Esperon then filed a perjury case against 12 individuals. Perjury cases against 11 other individuals were dismissed, except the one against Belardo. She has posted bail on December 6.

Cristina Palabay, Karapatan Secretary-General and one of the respondents in Esperon’s “reprisal” charges, earlier lambasted the Duterte regime for harassing an elderly nun, whom she described as “more credible than Duterte and all his generals combined”.

“Sr. Elen has spent years away from the spotlight, dedicating herself in literacy programs. While this government is focused on destroying schools and denying the dismal state of education in the country, the likes of Sr. Elen have long invested their time, love, and effort, in helping communities attain their right to education and right to self-determination,” Palabay said.

RMP said the case was part of the vilification campaign against groups critical of the human rights violations and abuses of the Duterte administration, especially the war on drugs.

“It is clear that this perjury case was filed against the petitioners to turn the discussion away from the real issue and as a reprisal to stop us from speaking about widespread human rights violations,” RMP said in a statement.

RMP was also targeted in the Philippines’ military and Presidential Communications Operations Office (PCOO) officials trip to Bosnia, Switzerland, and Belgium in February this year to ask the European Union to stop funding RMP, Ibon Foundation, Karapatan, and other groups for allegedly being ‘communist fronts.’

RMP, according to its website, is a “national organization, inter-congregational and inter-diocesan in character, of women and men, religious, priests, and lay” who live and work with farmers, fisherfolk, indigenous peoples, and agricultural workers. It was founded on August 15, 1969 and is one of the Mission Partners (MPs) of the association of Major Religious Superiors in the Philippines.

‘NGO and POs do not require government approval or regulation’

Progressive groups are seeing a long, arduous battle over their registrations since last year.

Earlier this year, Karapatan hit government newswire Philippine News Agency for posting an article on May 8 this year that Karapatan’s registration with the Securities and Exchange Commission (SEC) has been revoked.

“While the registration of the former entity Karapatan Alliance for the Advancement of People’s Rights was revoked, without proper notification from the SEC, in 2005, Karapatan has remained operational and had secured a new registration under Karapatan Alliance Philippines Inc. (CN201306418, March 27, 2013) as a non-stock, non-profit, non-governmental organization with the Securities and Exchange Commission,” Karapatan informed the public in May.

Karapatan maintained that they have consistently submitted all SEC reportorial requirements.

RMP said the same, attesting they have submitted reportorial requirements with the government agency and were not told if their registration had any issues.

“Even as we abide by government laws on registration of legal entities such as non-profit organizations, we strongly assert too that operations and activities of NGOs and people’s organizations do not and must not require government approval or regulation, in order to freely do our work and conduct our advocacies as human rights monitors,” asserted Karapatan.

Said memorandum mandates all non-profit organisations in the Philippines to “comply with arbitrary and invasive registration requirements.”

FORUM-ASIA, a regional human rights group with 67 member organisations in 21 countries across Asia,  in February this year said “this development comes amidst increasing government pressure on civil society, and allegations of surveillance targeting human rights defenders. The memorandum will further legitimize the invasion of privacy of individuals, and hinder the capacity of organisations to do their legitimate human rights work.”