Home NEWS Son of one of HRD7 writes to judge: my father is innocent 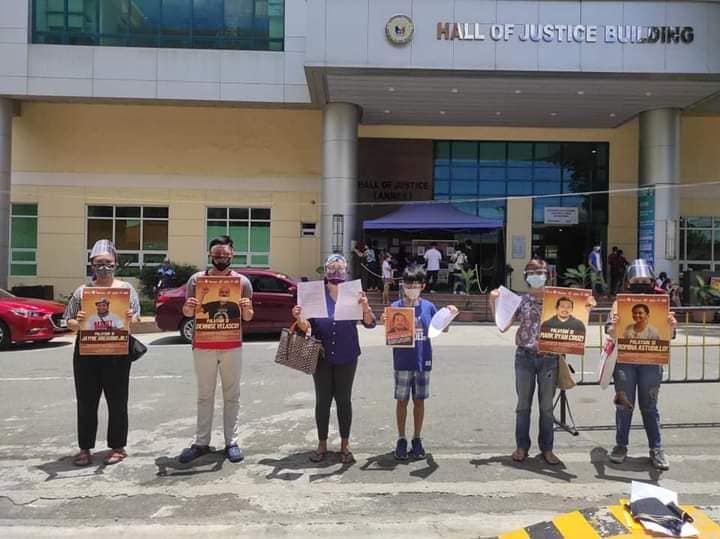 Ten-year old MJ Cruz submitted on May 27 a personal letter to Judge Kathleen Dela Cruz-Espinosa of the Quezon City (QC) Regional Trial Court Branch (RTC) 91, where the illegal possession of explosives charge against his father Mark Ryan Cruz and two others was filed.

“I am sad because my father is in the jail for almost 6 months now. My father is not a criminal gang member. He is [an] activist and unionist. Before I was born and until before he was arrested on Dec. 10, 2020, I know my father was helping many workers. That’s why I am sad he is in jail. My father is innocent!” the grade 5 pupil said.

Dela Cruz-Espinosa denied on May 2 the motion to quash search warrant filed by Cruz, Romina Astudillo and Jaymie Gregorio, 3 of the Human Rights Day 7 (HRD7). The ruling was released to media only on May 25. Five of the HRD7 remain in jail after almost 6 months.

MJ’s mother, Ella Durana, explained to the child that the motion that could potentially lead to the dismissal of cases and early release of his father was denied. Her son asked why and thought this might be because the judge did not know his father. This then led to the idea that mother and son write to Dela Cruz-Espinosa.

“The police are lying. They planted guns and grenades and pistols,” said MJ in his letter.

Durana said she also had to tell the kid frankly what happened to his father. The HRD7 were arrested in simultaneous raids on the midnight, around 2am, of December 10, International Human Rights Day 2020.

QC RTC Executive Judge Cecilyn Burgos-Villavert issued warrants to four locations against the 6 unionists and 1 journalist on December 3, 2020 in one hearing and on the basis of the police narrative alleging that the 7 were engaged in a gun running syndicate.

Telling MJ the truth was not so hard, recalled Durana, as the child had also known about the arrest of activist couple Cora Agovida and Michael Tan Bartolome in October 2019, also on the force of search warrants issued by Burgos-Villavert. They were arrested on the same day as more than 50 others were raided and arrested by police in Negros, also via search warrants issued by Burgos-Villavert. The couple, as well as those arrested in Negros, also accused the police of planting evidence.

Kin of Joel Demate in Manila and Dennise Velasco also in QC also wrote to the respective trial judges of their loved ones to introduce them as activists, their lifelong devotion, and not gun runners.

Demate’s motion to quash warrant and motion for reconsideration for the former were bother denied by Manila RTC Branch 50 Judge Bibiano Colasito. The judge said that even assuming witnesses lacked credibility, the court is not duty-bound to hold a new determination of probable cause in the issuance of the warrants. He also cited he had to defer to the issuing judge’s findings as she is presumed to have regularly performed her duties.

Journalist and Manila Today editor Lady Ann Salem and trade unionist Rodrigo Esparago — also among the HRD7 – were released on March 5, almost 3 months into their arrest, after Judge Monique Quisumbing-Ignacio of Mandaluyong RTC Branch 209 granted the motion to quash warrant and dismiss the cases against the two on February 5.

The search warrants issued against Salem and Esparago by Burgos-Villavert were declared void for being “vague” and cited that the police seized items not included the warrant as a “fishing expedition.”

Material inconsistencies in the conflicting statements of the police and their informant in their application of the warrant also lent doubt to the credibility of their testimonies, so much that “the court cannot formulate a coherent statement of facts,” ruled the judge.

Meanwhile, MJ will turn 11 on July. His father is still in jail.