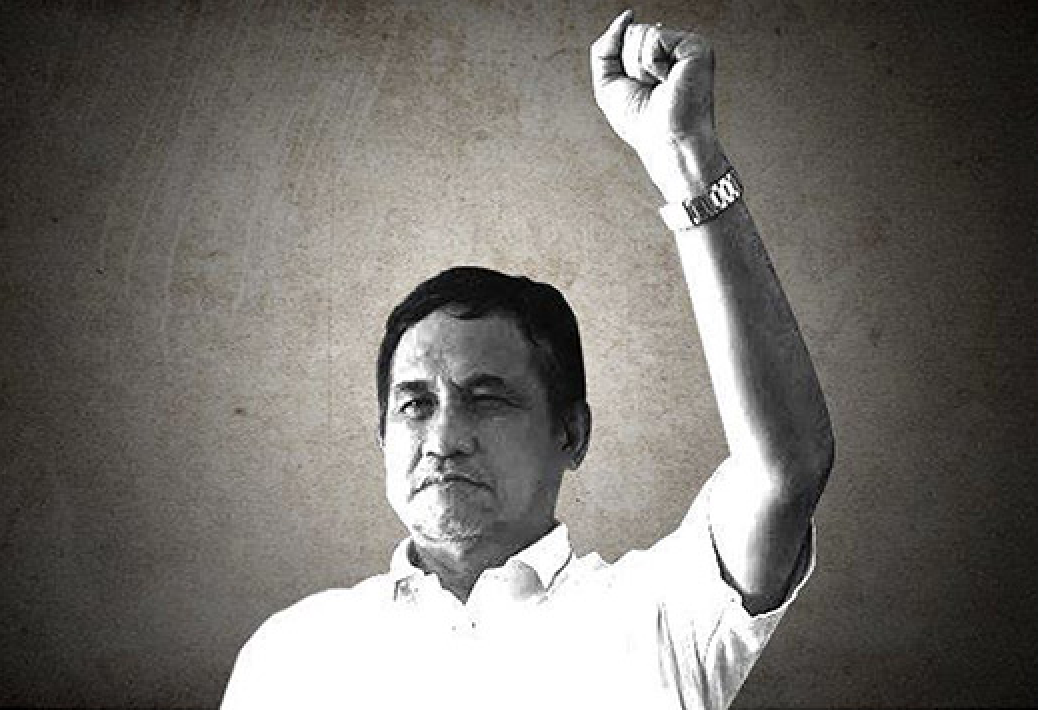 Adelberto Silva or Ka Adel, who turned 74 today, is probably reading a book in his jail cell on his birthday. It is probably a book about chess, politics or a spy novel, or sometimes literature, thought his wife Rosanna Cabusao-Silva or Sharon.

On regular days at home, Adel would also just read books or play chess against himself. They led simple, even quite boring lives, Sharon said.

Adel has been in jail since his October 15, 2018 arrest with 4 others in Sta. Cruz, Laguna. Within days of their arrest, Laguna prosecutor Ma. Victoria Dado dismissed the complaint of illegal possession of firearms filed against their three companions—Edicel Legaspi, Ireneo Atader and Hedda Calderon. But among the 5, only Calderon was eventually released on bail.

That was his second arrest on illegal possession of firearms and explosives charges. Police alleged two .45 caliber pistols and explosives were seized from the activists’ vehicle.

The first one was also Adel’s first arrest in all the years he was an activist and even during Martial law. It was dismissed within a year.

Adel was arrested with Sharon and their male house companion Isidro de Lima by a team composed of the Armed Forces of the Philippines (AFP), the Criminal Investigation and Detection Group (CIDG) of the Philippine National Police (PNP), and Special Weapons And Tactics Team (SWAT) on June 1, 2015 in Bacoor, Cavite.

The most memorable birthday the couple celebrated together was when they were both in jail. Sharon said they had visitors the whole month who brought them food to feast on. Jailers even asked them if it was their practice or tradition to celebrate for a whole month. It was not, shared Sharon.

Even out of jail, birthday celebrations are simple for Adel and Sharon. Being born on the same month, they usually just have one celebration.

This year, Adel’s siblings and in-laws have sent him cake and food so that he and his companions in jail would at least have something good to eat on his birthday.

Sharon was released after their common case was dismissed, but Adel still had pending murder charges. Among them was the Inopacan mass grave discovered in 2006, which human rights group Karapatan said is an ‘invention’ of the military during the presidency of Gloria Macapagal-Arroyo and a recycled case they also called “the case of the travelling skeletons.”

In August 2016, Adel was released with Benito and Wilma Tiamzon and other peace consultants, so they could participate in peace talks between the government and the NDFP.

“Our common birthday wish, of course, is for his freedom. And for the people to have a better, new government,” said Sharon.

The Anti-Terrorism Council (ATC) has formally tagged as “terrorists” 19 individuals, alleged members of the central committee of Communist Party of the Philippines (CPP), including Adel.

“Of course the family’s first reaction is one of indignation, because there is no basis to tag him as a terrorist. Adel has served the poor for most of his life, especially workers, but this is how the government would treat him,” said Sharon.

She said she also fears for their family and her husband’s safety.

“Because there is no basis, anyone can be a victim of this,” said Sharon.

The ATC said in its resolution that it found probable cause based on verified and validated information “warranting the designation of the following central committee members of the CPP” as terrorists.

The resolution was signed by Executive Secretary and ATC Chairperson Salvador Medialdea and National Security Adviser and ATC Vice Chairperson Hermogenes Esperon on April 20 and published in a newspaper on May 13. It said the 19 personalities violated the following sections of the Anti-Terrorism Act of 2020:

However, most of the 19 are the same people among an original list of 600 that the Department of Justice (DOJ) sought to proscribe as terrorists in 2018, including Adel.

The DOJ would pare down the list to only eight people by January 2019, delisting Adel and the Tiamzon couple.

The proscription filed and issued by a court was a requirement of the Human Security Act of 2007, that the new anti-terrorism law replaced. In February 2019, the court said that only Jose Maria Sison and Antonio Cabanatan have “unassailable links” to the CPP and New People’s Army (NPA).

“How can the anti-terror council, three years hence, claim to have ‘verified and validated information’ against these peace consultants when it has already been proven in court that there is none?” the Public Interest Law Center (PILC), legal counsel for Adel, questioned the ATC’s listing.

“Not only had they shown long track records in the legal democratic movement, the Manila court aptly dropped their names from the proscription petition under the Human Security Act because there was no evidence linking them to terrorist organizations or activities,” said PILC.

Life in service to the people

What could have inspired Adel to live a simple yet hard life, trying to challenge the status quo in the country? And why continue despite being repeatedly arrested or targeted by the government?

“He does not complain. He has no bitterness. I learned how to live on very little from him,” shared Sharon.

Adel’s simple way of living, before it became a philosophy for him, could have been something Adel learned from his childhood. Sharon said Adel belongs to a big family with 7 children, and they grew up in the immediate post-war period, when the family endured hardships.

A simple lifestyle has also prepared him for a difficult life in jail.

“There are people like him who believe in the changes needed in this country and who are not afraid to make these changes happen. That they live their lives for others, not for themselves. They live and work not to enrich themselves. They are like workers whose own labor is their only property, so they have no doubt that they have to break their chains of oppression,” said Sharon.

This thought is what continues to give them both courage, Sharon shared.

He admired Claro M. Recto’s nationalist stance against parity rights and the US military bases in the Philippines. Many others also admired Recto then, and this was what made it easier for him to explain his activism to his parents.

In the 1960s, he became one of the founders and active members of the Kabataang Makabayan or KM. The group would be outlawed during Martial Law by then-president Ferdinand Marcos, Sr. Adel was forced to fight the dictatorship underground.

When he was in Cordillera in the 1970s, he organized and educated miners about their rights. He went back to Metro Manila to organize workers and became adviser to then-Kilusang Mayo Uno (KMU) Chairperson Rolando “Ka Lando” Olalia.

After the 1986 EDSA uprising that toppled Marcos, Adel took part in the peace talks as peace consultant for the NDFP.

He again joined the peace talks under the Duterte administration in 2016. He helped draft the Comprehensive Agreement on Socio-Economic Reforms, along with peace consultant Randall Echanis who was slain at home in August 2020 during the lockdown and curfew hours.

Adel was also notably the protégé of National Artist for Literature Amado V. Hernandez also known as Ka Amado, who was also a labor leader. Then a student, Adel caught Ka Amado’s attention when he won a declamation contest sponsored by the local government of Manila where the latter served as chairman of the board of judges. Aside from Ka Amado himself, Adel was the only other person who knew the ‘right way’ (or as Ka Amado prescribed) to declaim ‘Kung Tuyo na Ang Luha Mo, Aking Bayan.’

In this day and age, the people could use this poem or a new rendering of its passions to confront our current afflictions in the country.

However, a reverse of said doctrine is happening. Criminal cases are being thrown at activists and government critics, and not rebellion. Non-bailable cases like murder or attempted murder from injuries or casualties in an encounter between government troops and the NPA in far-flung areas are being slapped by military against activists, many if not all have never set foot in the area. Others were charged illegal possession of firearms and explosives. Many cases have been dismissed, but only after political prisoners have endured months or years in jail.

Some political prisoners on trial languish in jail for as long as more than a decade, while some even get convicted. Others who had just been in jail for days, weeks, months or even just a year would be among those considered lucky.

Asked if the couple had talked about the prospects of Adel’s cases taking years in court, Sharon said that while that is burdensome to think about, they are aware of the dangers and the sacrifice if one chooses to serve the people.

What Karl Marx wrote in “Reflections of a young man on the choice of a profession” was something she deemed can explain their thoughts on that matter.

“If we have chosen the position in life in which we can most of all work for mankind, no burdens can bow us down, because they are sacrifices for the benefit of all; then we shall experience no petty, limited, selfish joy, but our happiness will belong to millions, our deeds will live on quietly but perpetually at work, and over our ashes will be shed the hot tears of noble people.”

Lady Ann Salem is an editor and co-founder of Manila Today and former political detainee. She was raided at home at midnight of International Human Rights Day 2020, arrested and detained on planted evidence and charges of illegal possession of firearms and explosives. Cases against her were dismissed on February 5, 2021 and she was released from jail a month after.