Home OPINION May 9: Make or break for the people 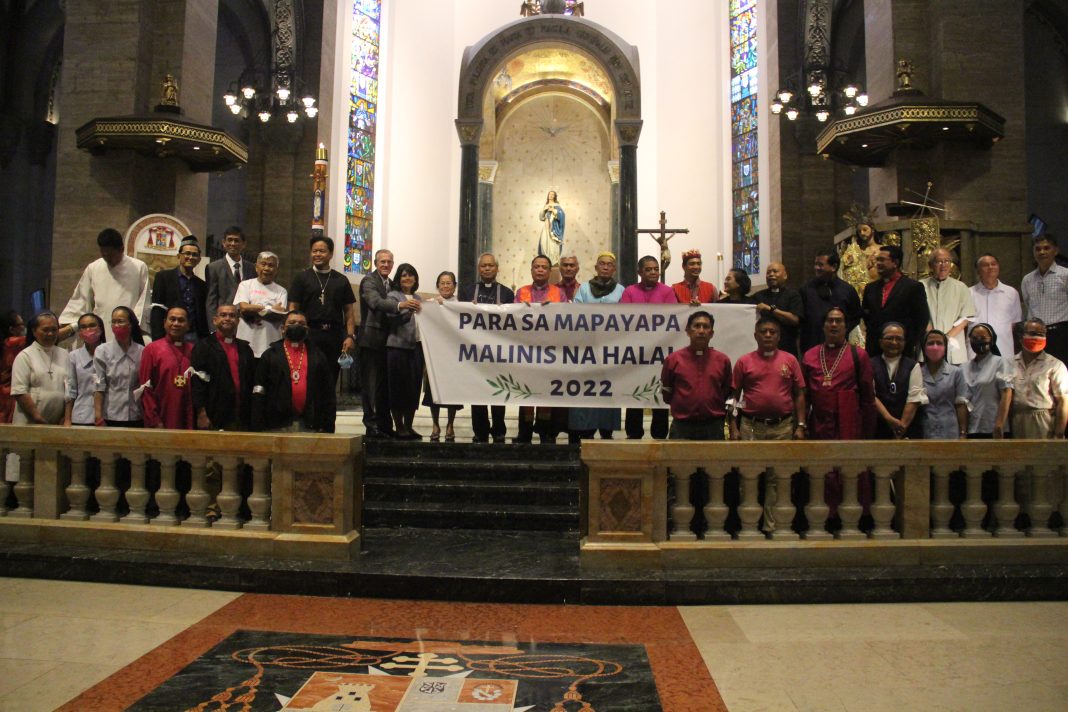 For the first time in the history of Philippine Churches (Roman Catholic, Protestant Churches, Evangelical Churches, Independent Churches), almost all clergy and lay people have openly endorsed presidential candidate and current Vice President Leni Robredo and her team to lead the country in the next six years. They believe that supporting “God-fearing, incorruptible and capable” candidates is their moral obligation.

The clergy and lay people of the Iglesia Filipina Independiente (IFI) will participate in the May 2022 Elections to exercise its witnessing ministry.

In witnessing, the IFI is always reminded of the its “definition” that states: “The Iglesia Filipina Independiente is a congregation of new ‘persons’ educated in and liberated by the teaching of Christ, dedicated to the worship of God in spirit and in truth, nourished and sustained in the Eucharist, and commissioned to be witnesses to God’s love in the world.”

As witnesses of God’s love in the life of the Filipino people, the IFI facilitates an electoral education campaign to vote for the qualified candidates to lead our nation and to serve as watchers to ensure that clean, honest and orderly elections happen.

In the event of the failure of elections because of no credible result due to massive cheating, the IFI should serve as witnesses and join in the people’s protests and actions.

The IFI will carry out one common task of registering its dismay and protest, filing legal complaints and marching on the streets for truth, fairness and justice. The IFI has to do the above-mentioned actions because its vote is sacred, its vote is the will of the people and its vote is the voice of God.

Thus, in the IFI witnessing ministry, it shall be guided by some Biblical References that will help us explain why candidates of good qualities should be voted or chosen to serve not only as executive officers but also as members of the legislative bodies in our country. The IFI shall seriously consider choosing qualified leaders to serve the people of God in our beloved country, the Philippines.

The IFI reminded its members that our country, at present or even in the next years to come, is beset with enormous crises. The Covid-19 pandemic exposed and continues to expose the poor public health system in our country. There is an unabated increase in oil prices, driving the increase in prices of basic commodities. The farmers, farmworkers and even fisherfolk continue their suffering because of landlessness and lack of government assistance in agricultural production, rice importation and the flooding of smuggled vegetables. The workers and employees carry the burden of contractualization, unjust wages and deprivation of their rights and benefits. The urban poor settlers, aside from no permanent jobs, are always threatened by the government’s demolition activities. The labor export policy dictates the situation, life and work of the overseas Filipino workers. The indigenous peoples and Moro people cannot properly and peacefully settle in their own ancestral lands because of the government’s “anti-terrorist” campaign and development aggression. The plunder of the country’s natural resources continues because of liberalization in the mining industry. China continues to occupy and exploit the West Philippine Sea because of the Duterte government’s lacklustre commitment to defend the country’s territorial sovereignty. The country’s international foreign policy depends on the superiority of the United States while embracing the Chinese intrusion into the Philippine territory. The people continue to experience their rights being violated, with no justice in sight for the victims of the bloody drug war and political killings in the past six years.

These crises divide the Filipino people. The “militarized” government even exacerbates the crises. The anti-terror campaign of the government becomes the source of “money-making” among favored bureaucrats and state forces.

Therefore, the May 9 Presidential Elections 2022 is being projected by the majority of the Filipino people, Church and civic leaders and even investors, as the saving event for the Philippines.

Many people think that good governance will come out after the Elections in 2022 and peace talks would resolve the more than 50-year civil war or armed conflict in the country.

On the other hand, the US-backed Philippine state forces would directly or indirectly intervene in the electoral processes to ensure that no nationalist and progressive candidates and party lists will win in this coming election. That the campaign against and put up posters against voting for Makabayan party-list groups in their stations or offices is just one example of this.

In this regard, one vote of a good citizen is important. The vote of the Christians would help normalize the impending situation that calls for radical social transformation. At the same time, the votes of the righteous people of God are expressions of indignation and condemnation of the rotten political system in this country.

As a Church, the IFI believes that a good leader should be committed to and must stand for DIGNITY:

I – Integrity of creation and for justice and peace

Furthermore, the IFI Vote for DIGNITY in May 2022 would be guided by the IFI’s theological understanding of the Mission of Jesus Christ in Luke 4:16-21. Members of the IFI will ask the candidates about their commitment to serving God’s people and strive to actualize a vision, mission and ministry of Jesus Christ.

Luke 4:16-21 is all about the vision and mission of Jesus Christ. The leaders that are enticed to do this mission must be those who are committed to actualising the message of verses 18 and 19: “The Spirit of the Lord is upon me, for he has anointed me to bring Good News to the poor. He has sent me to proclaim that captives will be released, that the blind will see, that the oppressed will be set free, and that the time of the Lord’s favor has come.”

The political leaders who are needed today are those committed to serving the people of God, especially the poor. Some politicians are always thinking of the poor as the “object” of serving. In fact, candidates will always use the word “poor” so that people will vote for them.

The leaders who pledged to serve the poor must commit “to bring Good News to the poor.” It means that the disparity of social status among the Filipino people should be addressed. What is that good news to the poor? The good news for the poor is their liberation from their dehumanizing situation. Three years or six years of serving the poor is not enough to liberate them but at least public servants should have the heart for them and help them to free themselves. The committed leaders should always defend the struggle of the poor and not condemn their efforts to be emancipated from the sinful situation wrought about by poverty and injustices.

The committed leaders are willing to do in bringing and proclaiming “that captives will be released, that the blind will see, that the oppressed will be set free.” Proclaiming is teaching and doing. Public officials should teach the Filipino people that there are prisoners because of injustices; trumped-up charges and they are forced to commit crimes because of poverty and unequal opportunities to grow in abundance.

Setting free the oppressed is implementing the programs that are answers to oppression. If the poor farmers and farmworkers are oppressed, the roots of oppression must be resolved. Landlessness is the root of peasant oppression. Thus, genuine land reform should be implemented.

If the workers are oppressed by contractualization policy, neo-liberal policy, labor export policy, regionalized wage policy and other economic policies that hinder the workers to prosper, they should be freed. The key to their liberation is the program for national industrialization.

If the Filipino people are oppressed because of unequal international foreign policy, there must be genuine national independence and protection of the national patrimony.

Aside from these social maladies, there are many social injustices in the Philippines that entail freedom and emancipation or a continuing struggle so that “the oppressed will be set free.”

The genuine land reform, national industrialization and international foreign policy are issues or contents of the socio-economic reform and political and electoral reform agenda in the peace talks between the Government (GRP) and the National Democratic Front of the Philippines (NDFP). The candidates should have a clear commitment to pursuing and supporting the peace talks by urging both parties to resume the peace talks in the earnest.

Can the candidates of Elections 2022 stand and commit to working on the realization of the Biblical mandate of proclaiming “Good News to the poor” and “that captives will be released, that the blind will see, that the oppressed will be set free?” They should be scrutinized.

Studying seriously the qualifications and qualities of the candidates for national and local elections in May 2022 is our great task. We should seriously consider voting who are servants, God-fearing, trustworthy, good stewards and committed leaders to bring Good News to the poor and the “captives will be released, that the blind will see, that the oppressed will be set free.”

The May 9 Election is the make or breaks for the people because if the Marcos team wins, the historical facts of the country will be reversed, as they will project this as their redemption despite no apology and recognition for thousands of court-proven human rights violations. There will be no mention of the sad and horror stories of Martial law. The EDSA People Power commemoration will be restricted. The recovery of the ill-gotten wealth of the Marcoses will not be pursued. The P 203 billion realty taxes of the Marcoses will not be collected. Above all, the Marcoses will stay in Malacañang beyond the six years term of administration. In fact, these are the reasons why for Bongbong Marcos, the fight is also a make or break one.

But the people must win. The POWER of the people should prevail. Vote for DIGNITY, be vigilant, be ready to act, and assert the POWER to the people.