Home NEWS Fight for our future 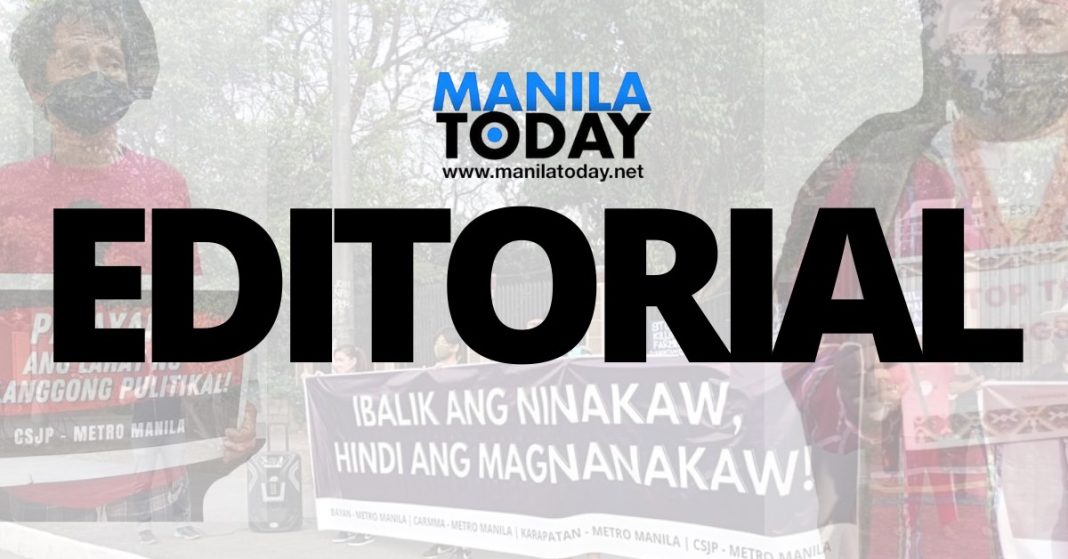 For 36 years, the people have memorialized February 25 so we don’t forget the horrors of yesterday. But today, with the upcoming May elections, we remember EDSA People Power with the need to fight for the kind of future we want: democracy or despotism.

We are at a crossroads like we have never been before. History repeats itself—how did we get here? The terrors of the past cast a long shadow for as long as we have not learned our lessons. And after Martial Law and EDSA People Power, are we ready to make the better choice?

Like all previous elections, what appears before us is like a choice between the lesser evil. Many ascribes this choice to the names in their ballots. But this also applies to the choice of the kind of system we want.

One path laid before us treads towards more and more reforms—slight, disjointed and adorned with infrastructure at best. It is still not the kind that has lessened the poor and hungry after a few decades of the restoration of democracy, but one that maintained if not multiplied their numbers and their suffering for the gain of the lesser few.

Still, it is a situation we can make better if we continue to work for fundamental reforms should there be room for our democratic rights at least.

The other is not only a return to power of those who has not fully answered for their crimes to the people but also a continuation of the tyranny of the past six years—one that has surpassed the number of extrajudicial killings in the 14-year Marcos dictatorship. This is also an attempt to escape accountability for the crimes from more than four decades ago and this last six years. They croak unity, the battle cry of EDSA, but their campaign trail trample upon the lives and the graves of those they wronged. This is the worse, or the worst of all alternatives.

After 36 years since the EDSA People Power, the dictator’s son is seeking to make a comeback to Malacañang, with unreturned ill-gotten wealth from the plunder of the country’s coffers a ready source for unlimited campaign funds. Money can surely buy popularity and winnability—something post-EDSA has not cured in the system and culture of elections we have.

No apologies, no remorse, human rights record being denied despite conviction, and plunder convictions on appeal by Marcos family members who were not just immediate kin of the late dictator, but also enforcers of the Marcos dictatorship. They seek absolution, redemption and restoration to power and wealth. If they could do it, then more others could surely follow—they are not just ghosts from the past, but a dangerous precedent for the future.

For fourteen years of the Marcos dictatorship, freedom-loving Filipinos risked life and limb to overthrow the dictator. They worked in underground movements; previously legal organizations that went underground after the Marcos dictatorship declared them illegal. Today, these organizations are those that the current Marcos-copycat has recently declared as ‘terrorists’ through the Anti-Terrorism Act of 2020. The schemes the old tyrant used to stay in power is now being used by the current one.

This is also a warning issued by the current administration that those who try to voice or act on their dissent to those who work to change the status quo, those who work for either slight or fundamental reforms will again be risking life and limb to do so.

Despite these odds, we must choose better.

We must choose true national industrialization to happen, so that the country could harness its own riches and put them to the use and benefit of the people. So that the country could create jobs meaningful and productive for national development and raise national income and not just rely on local and foreign debts. So that we could develop our use of or our own technology for our needs. So that we don’t rely on exporting our raw materials and then importing the finished products at a higher cost. So that workers’ wages and working conditions could be improved, so in turn they could afford to live a little bit more decently while their ability to spend more also contributes to the economy. So that people could truly be resilient from calamity and not just survive with their lives. So that we could break out of the cycle of monopolistic price hikes.

We must choose true agrarian reform to give land to the tillers, help them produce so that the farmers and the poor can eat, have stable livelihood and grow out of poverty. So that there would be enough food in the country for people to not go hungry. So that we could eventually have food security and need not rely on importing agricultural products that the country itself could produce while destroying the livelihoods of farmers, distributors and sellers in so doing.

To allow national industrialization and genuine agrarian reform to flourish, we must choose to stand for our territorial integrity and economic sovereignty. That is the more practical reason for fighting for our rights in the West Philippine Sea and doing away with lopsided development contracts (a lot of them destructive to the environment)—it is for the welfare of the people. The other reason is nationalism.

We are bound to uphold, defend press freedom and freedom of expression—from disinformation to utmost suppression—along with other rights and liberties that those freedoms seek to preserve. We are able to write today, to editorialize, because of the press freedom and freedom of expression that was restored after the dictator was toppled. We have at least that to hold on to for now.

No matter who the candidate, we must choose how we can make the system in the country better.

But, at the very least, we must not allow a repeat of history—the Marcos rule or the last six years. This is a fight for our future.