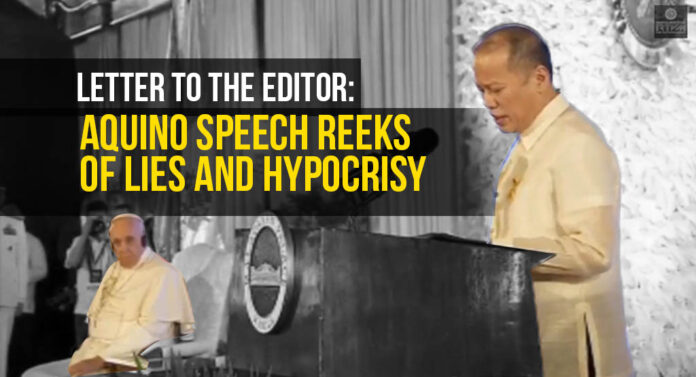 In his speech before the Pope in Malacanang, President Aquino praised the late Bishop Emeritus Antonio Fortich, among other religious leaders, for daring to speak out against the Marcos dictatorship.  But Aquino then griped about some bishops now criticizing everything, including his hair.

The late Bishop Fortich might turn in his grave. Bishop Fortich was not only against the Marcos dictatorship, he was also vocal against landlordism and exploitation of sugar workers. Fortich’s first act after he was named Bishop in Bacolod in 1967 was to call on sugar planters to provide just wages to workers.  In a pastoral letter on the plight of sugar workers, Fortich even stressed the right of workers to form unions.

During his time, Bishop Fortich was instrumental in the immediate implementation of land reform on church properties, the opening the Social Action Centre and free legal aid program for the poor and the sacadas (sugar workers); and church support for the establishment of the National Federation of Sugar Workers (NFSW), now our local affiliate in Negros island.

In contrast, Luisita sugar workers received a measly P9.50 per payday when they decided to strike against the Cojuangco-Aquinos’ Hacienda Luisita, Inc. (HLI) in 2004. Aquino, who was then an administrator of the sugar estate, not only denied Luisita farmworkers just wages. Farmworkers know for a fact that Aquino is one of the perpetrators of the Hacienda Luisita massacre.

The violent strike dispersal in Hacienda Luisita on November 16, 2004 killed seven and wounded hundreds of others. Aquino, who was then a Congressman, defended the massacre in a privilege speech only hours after the bloodbath.

[quote_center]Land reform in Luisita is “a monumental sham,” while violent eviction, unlawful arrests and threats against farmers continue, ten years after the massacre.[/quote_center]

The President pompously projects himself as “walang bahid (faultless)” even when his government has been shamelessly aiding his kin maintain control of Hacienda Luisita despite a landmark Supreme Court decision for total land distribution. Land reform in Luisita is “a monumental sham,” while violent eviction, unlawful arrests and threats against farmers continue, ten years after the massacre.

Aquino’s speech before the Pope definitely reeks of lies and hypocrisy. The decades of oppression and injustice suffered by thousands of farmworkers under the Cojuangco-Aquinos is the perfect example of ‘glaring, scandalous inequality’ in Philippine society.

Agricultural workers are among the most oppressed in Philippine society. While Aquino insists that the Pope’s remarks on corruption and inequality were not addressed to him and his regime, we trust that the Pope’s message of solidarity with the poor will bear fruit throughout the nation. We hope to continue the struggle for land, jobs and just wages, with warm support from various sectors including the Church and its faithful.