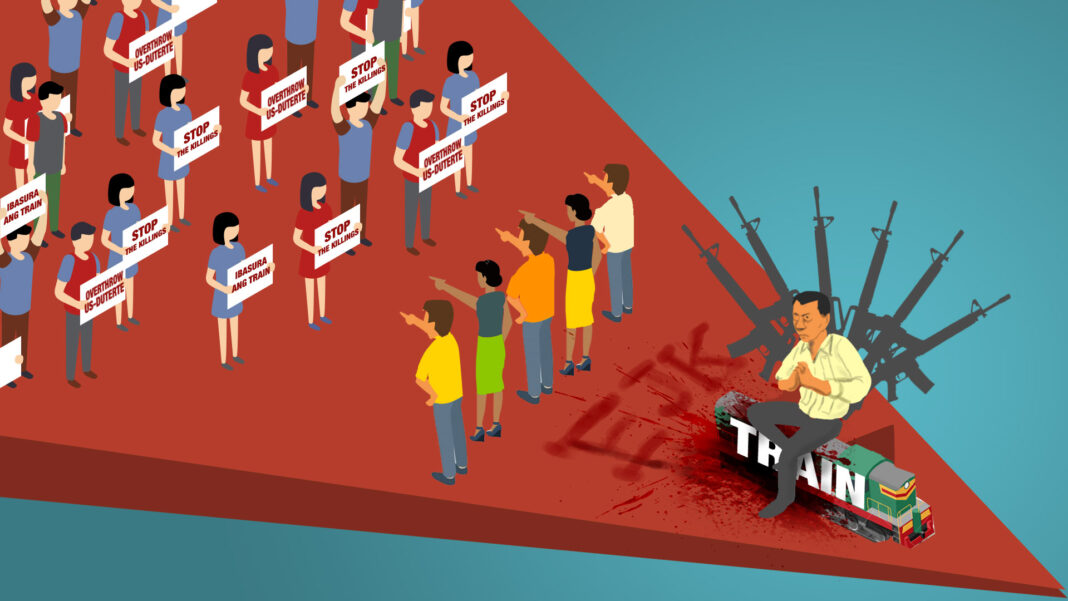 Our emphatic response is no, but some are flaunting the question as if the issue is already settled. That the Left is guilty of political opportunism by collaborating with the government of Rodrigo Duterte; that it shed its revolutionary credentials by joining Duterte’s Cabinet; and that it was already shamefully late when it severed ties with Duterte.

In some forums, the Left’s so-called ‘unprincipled alliance’ with Duterte is tagged for enabling the latter’s bloody ‘war on drugs’. Some even insinuate that the Left had a role with Duterte’s rise to power in local politics, including the operationalization of the notorious ‘Davao Death Squad’ (DDS).

It is easy to dismiss these claims as coming from partisan groups which are hopelessly anti-Left. But since these allegations are being peddled in corporate media and other opinion-making institutions, it is necessary to clarify some of the Left’s recent political decisions and debunk the moralizing posture of its ideological rivals.

The Left is both weak and strong in the eyes of its adversaries. It is often ridiculed as a ‘spent force’ but now it is being held accountable for enabling Duterte to kill, kill, and kill. The word ‘enable’ is uncritically used perhaps to appear persuasive in putting the Left to task for allowing Duterte to go on a violent rampage. But assuming that the Left ignored Duterte from the start, do critics really believe that it would have prevented the Tokhang carnage? That Duterte would be unable to carry out his vicious war against the poor because the Left was not a part of his administration?

Another problematic term is ‘alliance’. It must be emphasized that the Makabayan bloc endorsed the candidacy of Grace Poe, not Duterte. Furthermore, the Left said it is ready to sign a formal alliance with the Duterte government but only AFTER the finalization of the peace process.

The nomination of some Leftists to the Cabinet was indeed a positive gesture in resuming the peace talks. Some would probably interpret this as an informal partnership. But what a unique relationship! Leftist Cabinet members refusing to be apologists of anti-poor policies, activist ‘allies’ denouncing neoliberal prescriptions and human rights abuses, and communist rebels defending the legitimacy of the armed struggle. Compare this to the Yellow social democrats who blindly embraced the follies of the Noynoy Aquino government while identifying themselves in international conferences as anti-capitalist activists.

There was no lull in the protest movement even during the period when the Left was supposed to be a friend of Duterte. Critics are therefore lying when they insist that the Left remained silent while Duterte was unleashing his brutal wars.

Did the Left commit an error when it negotiated peace with a politician like Duterte? Context matters here. The peace process had been stalled for many years already and so the offer of the new government to resume the talks was seen as an opportunity to advance concrete proposals for substantial social and economic reforms. It also partly eased the living conditions in some communities heavily bombarded with military activities.

Looking back, it was remarkable that the National Democratic Front did not allow itself to be bullied into diluting its political program. Rather than capitulating to the fentanyl-driven whims of Duterte, it negotiated the prioritization of the Comprehensive Agreement on Social and Economic Reforms.

Indeed, Duterte is a sham socialist and his trapo background is not under dispute. But why did the Left choose to talk rather than fight Duterte?

Because unlike his predecessors, Duterte made the unprecedented move of providing a space for the Left to work within the bureaucracy. And to the surprise of mainstream pundits, the Left welcomed the chance to demonstrate its brand of leadership without losing sight of its strategic political goals like the signing of a conclusive peace agreement.

If the Left rejected Duterte’s offer, most likely it would still be mocked as a slow and dogmatic movement by the same critics who are accusing it today of collaborationism and opportunism.

Whether it supported or opposed the Duterte government, the Left is incapable of being correct from the point of view of groups which wanted it defeated.

But perhaps to the great dismay of conservative and pseudo-progressive political forces, the Left refused to surrender the struggle, it preserved its strength despite Duterte’s Marcosian tactics, and it continued to challenge Duterte’s tyrannical rule by stepping up its fighting capabilities.

If some opposition groups are squeamish about joining forces with the Left because the latter ‘colluded’ with Duterte, they must be reminded that no one has prevented them from building their own campaign that would unite and mobilize the people against the rising dictatorship.

Their failure to expand their ranks is often overlooked because their ranting against the organized Left is louder. They wanted to forget their political impotence by denouncing the Left for not doing what they think the Left should be doing in behalf of them.

Meanwhile, understanding the situation today requires the naming of groups and forces which backed Duterte and the role of various power blocs in allowing him to consolidate his presidency. Hence, it is valid to analyze and discuss the impact of the Left’s dealings with the incumbent government vis-à-vis the influence of other political forces. But some anti-Left groups expose their rabid partisanship when they focus exclusively on the NatDem movement as if it alone is responsible for whatever the ruling party is doing to the country. Political objectivity is shelved to engage in anti-Left nitpicking.

How duplicitous for the anti-Left to sensationalize the alleged tactical alliance of the Natdem movement with Duterte while conveniently failing to explain the real existing support given by other political factions to the incumbent government. They invented the fiction about the Left enjoying a prominent status in the government while deliberately understating the culpability of pro-Duterte forces and personalities.

If they really wanted accountability, then they should turn their hostility towards the oligarchs and other campaign donors, the country’s major political parties, the coercive instruments of the state, political dynasties, LGU officials, foreign military powers, and even the religious right.

But for the fanatical anti-Left, it is the Left and only the Left which should be held responsible for Duterte’s atrocities.

The opportunist posturing of the anti-Left is proof that Duterte’s legacy is the boosting of red scare in the country.

Even the history of the Left in Davao is indirectly linked to the formation of the DDS and the subsequent killing spree in the city. Is Duterte’s violent record an offshoot of the Left’s urban insurrection experiment? The framing of the question is simplistic since it doesn’t capture other essential issues such as the enduring effect of warlordism, feudal oppression, and local political dynamics that engendered the Left-led resistance in the region. To accept the argument that the presence of an aggressive Leftist movement in a specific locality could usher the rise of a political creature like Duterte, without giving a comprehensive critique of the local political economy, is tantamount to blaming the right of the people to dissent. This is an extension to the claim of politicians that Leftist organizing is anti-development because it undermines rural productivity and prevents foreign investments.

What Duterte and the anti-Left establishment have in common is their desire to invalidate the politics of the Left. Perhaps they both know that it is the Left which can successfully lead a nationwide opposition to the return of another despotic rule. For Duterte, he must attack the Left to survive. He is supported by the anti-Left establishment which can never tolerate the existence of a movement that espouses genuine revolutionary politics.